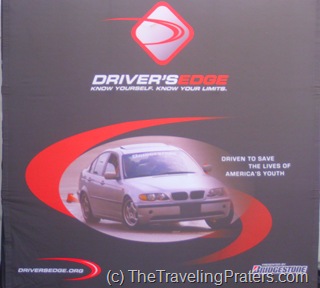 Every 61 minutes, someone is killed by a teen driver.

I don’t know about you, but as a parent of not one, but two teen drivers, those statistics terrify me.

Wouldn’t you like to give your child every advantage possible to be a better driver? I know I do. That’s why last weekend, I drove two hours one way to Nashville, Tennessee so my children could participate in the highly acclaimed, much recommended, Driver’s Edge program which is sponsored by Bridgestone.

The Driver’s Edge program begins with a heartbreaking 9-11 call from an accident that took place in Nevada nearly 12 years ago. A car full of students had left school to grab a bite to eat. On the way back to school, the driver took her eyes off the road momentarily, looked up, saw that she was about to miss a curve in the road, over corrected, lost control of her car and plowed head first into a steel pole. The car literally broke in pieces,  trapping the occupants in a mess of twisted metal. Two of the girls died.  One lost her leg. The others received severe injuries. The father of one of the girls killed was so distraught, he killed himself.

You may think the driver was behaving recklessly. She wasn’t. You may think she was speeding. Wrong again. She was obeying the speed limit and driving only 35 miles an hour! She took her eyes off the road, looked back up and panicked. She made a mistake. Haven’t we all? I know I’m guilty.

The school district reacted by banning students from leaving at lunch. Makes sense, right?  If the kids can’t leave during the day for lunch, they can’t get in accidents and they won’t die. But what happens on the way to school, or after school, or on weekends?

That’s were Driver’s Edge comes in. The minds behind Driver’s Edge knew there is a better way. How about picking up where traditional drivers education programs leave off? How about teaching your children how to handle adverse driving conditions in a controlled environment? How about giving your young driver an edge that one day may say their life or the life of another?

Driver’s Edge teachers your children how to remain cool under pressure and while teaching them evasive driving skills.

Participants learn proper posture for driving, where their hands should be on the steering wheel (9 and 3 for more control and best range of motion),  why it’s so important to wear a seat belt,  skid control, cornering, proper braking techniques, and steering when your ABS is engaged, and they also cover the dangers of drunk driving and driving under the influence. The instructors make use of every minute in this four hour course!

Oh yeah, did I mention that all the instructors are highly recognized in the professional driving arena? Who better to learn from than from those that understand driving better than anyone, professional race car drivers?

Driver’s Edge also works closely with the State Highway Patrol who demonstrate the effects of driving under the influence with goggles that simulate alcohol consumption.

In Nashville, the state police also brought in a truck that uses hydraulics to roll over. This simulates what happens to the occupants of a vehicle during a roll over; with and without seat belts. My son didn’t raise his hand when the officer asked who wore seat belts so he became the example for the rest of the group. The officer is showing him how to wear the seat belt properly. Doesn’t he look embarrassed? Maybe next time, he’ll raise his hand. 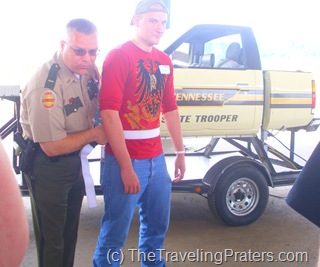 Next, the class gets a chance to drive and practice steering out of a skid. Don’t you just love the cars they drove? I have to tell you that my boys got really excited for the class after they heard they’d be driving BMWs. 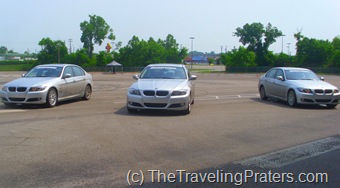 After the class is over the kids take a another test (they take a pre-test when they arrive) to see how much they’ve learned and then they had an awards ceremony. Each teen that completes the 4 hour course receives a certificate- which can be turned in to most insurance agents to save you money on your insurance premiums. (By the way, ours  jumped $2000 this year when we added the boy’s on as drivers…something to keep in mind if you have an up coming driver. )

Each teen driver also receives an emergency roadside kit, a  hat, and a  t-shirt which they can have autographed, if they chose. Not only did my boys each have their shirts autographed, they also asked one of the instructors, a two time Indy race winner to pose for a picture with them. 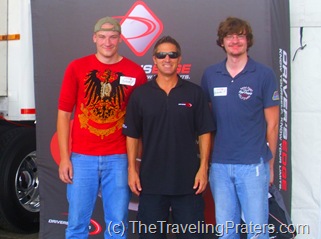 As a parent, I thought the instruction my children learned was invaluable. The instructors were incredible and passionate about what they do, you can tell that they really care about the kids.

I have recommended Driver’s Edge to everyone I know and can’t praise the program high enough. If you have the opportunity to go to this FREE program, for the sake of your child and other driver’s on the road, don’t miss it. Just one word of advice,  these courses fill up fast so don’t hesitate! You can find a list of the cities that have arranged for a Driver’s Edge program here.

If you don’t have a Driver’s Edge in your area, write to them, write to Bridgestone, let them know that you’re interested. They’d like to add more, they just need to know that there  is an interest.

Skip Barber Racing School, various locations throughout the US

Yes, it is an incredible program. I'd heard good things and even though myexpectations were already high, I was blown away.

What a great program!

I HIGHLY recommend this program and would love to see them add Ohio as oneof their tour stops. It's not free but if we were still in Ohio I'd send myboys to the defensive driving course at Mid-Ohio in Lexington- just incaseany of your friends that have older children are interested. :)

I think this is a great idea for teen drivers! What a fun program for them! and your poor son does look embarrassed... lol