An Out of this World Dining Experience- Planet Hollywood

When we were planning our trip to Florida for the Star Tours Meet-up, we knew we wanted to eat somewhere out of the ordinary.  The Rainforest Cafe was high on the list of possibilities but the kids and I had already eaten at the Nashville location. As a family we love movies and our kids are a bit older so my husband and I thought Planet Hollywood would be a good fit. Check it out, doesn’t it just scream Out-of-this- World? 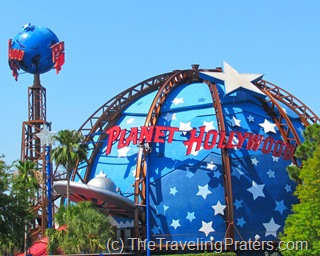 I hadn’t made advance reservations, but I did check Disney’s dining page the day before our trip to see how busy I thought it would be. All of the time slots that I’d be interested in were available so I figured if we just showed up they’d have room for us.  Turned out on the day we went,  we arrived at the perfect time, mid-afternoon and had no wait. We were ushered directly in the doors and to our seats. It wasn’t  crowded and the DJ didn’t start playing until 6pm.

Planet Hollywood is loud,  the continuous music videos that play on the screens around the restaurant and ongoing conversations add to the noise. Our waiter told us that once the DJ arrives, things really crank up. May sound like fun to your family, not so much to mine. We already only heard about half of what the waiter had to say anyway and I’m not a very good lip reader.

Planet Hollywood is way more than just a place to eat, and the Orlando location is the largest in the world.  At four stories tall, with three floors for seating, the restaurant doubles as a museum with over 750 pieces of  movie memorabilia.

While we waited for our food to arrive we meandered throughout the restaurant ooohing and aaahing over the collectibles on display. From Flubber, to Edward Scissorhands, Herbie, Toy Story,  and Men in Black, everywhere we turned there was something to see which reminded us of movies we’d watched. It’s worth a stop in Planet Hollywood just to take a peek around. 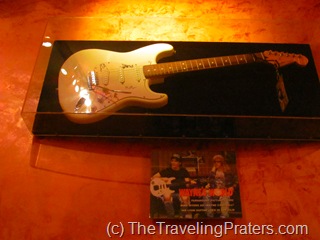 Our appetizers were okay, not spectacular. My favorite aspect was the creamy Spinach Dip, though the rest of my family didn’t want to try it. Instead, they preferred the Potato Skins.

We thought we’d have better luck with the desserts so we gave two of them a try, the Banana Split and the Brownie Sundae, which were HUGE and easily divided among my family.  Our favorite? The Brownie Sundae, hands down. 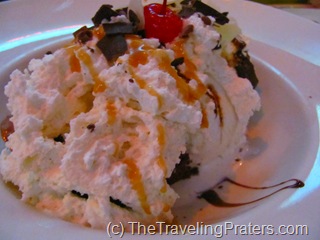 Though we only ordered appetizers and desserts with water to drink our total bill came to just under $60 for the five of us. The portions were large, the service was good, and believe it or not, we weren’t at all hungry when we left.

Planet Hollywood is known for appearances from “special guests” of the star studded variety and wouldn’t you know as we were leaving, an actor passed by us? I wish I could tell you who it was but his name escapes us and we can’t even remember what movie he’s been in. We know he’s bald, has dark eyes and always plays the bad guy. Hmmm…does that ring a bell for anyone? Anyone? It’s been driving me nuts!

Though there is plenty to see inside Planet Hollywood, don’t forget to look around outside too! 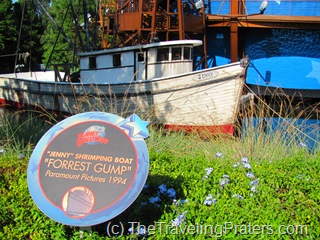 This was a fun stop for my family, one that we all enjoyed. I’d definitely recommended it for ages 12 and up. There’s so much to see and so many places to eat at Disney that I’d think one of the other choices, like the new T-REX Cafe, would be more appropriate for the younger set. But that’s just my opinion.

Star Tours Meet-Up at Walt Disney World: Through the Eyes of My Son
← Previous
Disney Fort Wilderness Campground: Why I wouldn't stay Again
Next →
Click here to cancel reply.