Today I’m welcoming my dear friend, Lana, as my first guest poster. I met Lana and her family when we first arrived in Alabama and though she’s since moved with her family, I still love to hear about the many outings she takes with her children.

Pea Ridge National Military Park sits a few miles outside of Rogers, Arkansas. I can’t tell you how many times I have passed the park entrance in the eleven years of living in Northwest Arkansas but I have never had the desire to stop until the last year or so. We were living in Alabama and had taken the kids to see a reenactment of the Battle for Decatur. My daughter enjoyed it so much that in my mind I knew we just had to attend the one held at the Pea Ridge National Military Park. However, we missed the reenactment held there this March.

On a recent trip to Northwest Arkansas, I decided that we would just ride out to the park and enjoy the day. I was so glad we did. I love when spur of the moment trips turn out so good!

Upon entering the Pea Ridge National Military Park visitor center we were greeted by a Park Ranger who asked if the kids wanted to participate in the Junior Ranger Program. I have a friend who had told me all about these programs and I was dying to try one out.

So the kids and I walked around the exhibits filling out the questions. We stopped in to watch the orientation film that was already in progress and I was quiet impressed that the kids watched as much of it as they did. It was almost over when my 7 year old got fidgety and cried out, “Why? Why did they have to die!”  It was then that we made our way to the car to begin the seven-mile road tour through the park. 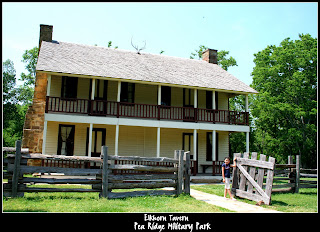 Sadly, you can not enter the tavern. 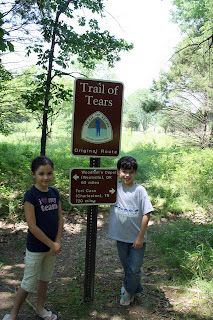 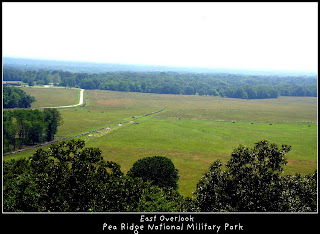 There are 10 points of interest on this battlefield. (I had no idea that the Trail of Tears ran right through the park but I was intrigued). We stopped, ever so briefly, at most of the stops. It was hot! The children and I loved the East Overlook, “…the best view of the battlefield in the park.”  They also loved Elkhorn Tavern that was used as a “field hospital caring for both Union and Confederate wounded” during the battle.

Pea Ridge National Military Park contains 4,300 acres. An orientation film and exhibits are available in the Visitor Center. A seven-mile tour road provides access to the battlefield and stops at important points of interest. This park has numerous outdoor recreation opportunities, including, walking, jogging, bicycling, picnicking and equestrian riding. There is an entrance fee that is collected in the visitor center. Living history programs are offered during the summer. They also offer a battle reenactment in the spring. You can visit the events page to see what’s coming up.

You may be wondering how my children liked the Junior Ranger Program. They loved it. They had to answer a few very easy questions and as we drove through the park they had a checklist of things to mark off as they saw them on the tour. They were so proud of their Junior Ranger badges. Unfortunately, my daughter left hers at the Buss Stop a few miles north of the park. If you ever get a chance to get an ice cream cone from the Buss Stop, I highly recommend a large. Yes, they come in sizes. 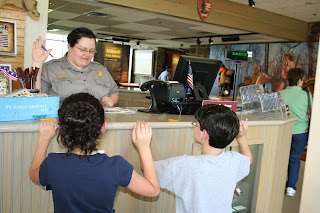