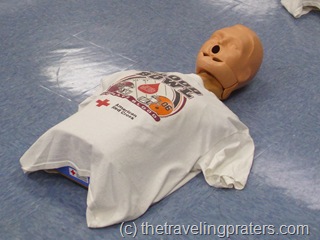 The bulk of our homeschooling over the past several years has been in the form of field trips. When my kids suggested that they learn how to perform CPR, I jumped at the chance to schedule a class for some area homeschooled teens. Our local Red Cross chapter was willing to do a class that included CPR/AED and Basic First Aid at their location for $60 a student for an 8 hour class.

I wasn’t sure what to expect and even though the class was my children’s idea, they were a bit apprehensive when the big day finally arrived. I think their fears were put to rest when we arrived at the classroom and they met the instructor. He was really down to earth and put the kids right at ease. Though I’d initially planned to pop in and out of the classroom just to check and see how things were going, I was fascinated and stayed the entire day.

Here are some of the things I learned during the class that I thought were helpful.

1. When there is an emergency situation you need to check the scene to make sure it is safe to help, call 9-1-1 when you find a life threatening condition and administer care.

2. You should always keep a list handy of emergency numbers. The very first number on on your list should be 9-1-1. It may seem like common sense, but in an emergency situation you never know how you will react.

3. When calling from a cell phone, even if your phone says that you don’t have service, try to call 9-1-1 anyway. Another cell phone tower may pick up your call and by law they have to route your call for free.

4. It your home phone operates and has power, the phone company will also route your call, even if you don’t have a contract or service through a phone company.

5. Another interesting fact I learned is that hot dogs are the number one cause of choking deaths in children aged 3-4. Choking is so common that the pediatricians and the FDA are calling for the redesign of hot dogs.

6. When it comes to adults, most choking victims are found in the bathroom. If you are choking, do not remove yourself from people. No one has ever died of embarrassment, but people have died from leaving the aid of others.

7. If you are choking in a building and you are alone, call 9-1-1 and run outside where the EMT’s will find you.

8. A universal sign of choking is that the victim will grab their throats.

9. When the kids learned CPR they kept time with a metronome. I found it surprising that the instructor shared two songs that keep the beat of the compression rate, Staying Alive by the Bee Gee’s or Another One Bites the Dust by Queen.   I fail to see how either would be appropriate to sing as you administer CPR.

10. My kids also learned how to administer the AED or Automatic External Defibrillator. Did you know that when Phillips tested their new model, they did so on five year olds? They wanted to make sure that the directions were clear and easy to understand. The five year olds followed the instructions perfectly.

I also learned some facts that repulsed me. Don’t ever assume that someone called 9-1-1 just because you asked them too. Surprisingly, sometimes people won’t make that call because they are in a hurry and don’t want to take the time or they just don’t want to get involved.

I also learned that it is common for bystanders to arrive at the scene of an accident not to help, but to take pictures with their cell phones? Really? What’s wrong with people? I can only hope that people would have the decency to ask themselves, what if that was me lying there, or if it was someone I loved?

My kids learned so much during their training and I’m really proud of them for completing the course. My kids all said that they hope they never need to administer CPR but at least they will be able to if needed.

Have you taken a CPR/AED/Basic First Aid Class? What’s holding you back?

This post is linked to Oh Amanda’s Top Ten Tuesday click the button below to join in: 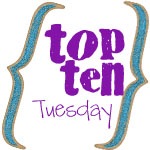 Song choices gave me a belly laugh. Thanks for sharing.

Sprite took the babysitting class last month. She loved it! I think it's a fabulous life skill kind of thing.

LOL on the song choices - good thing I wasn't drinking tea at the time. I actually cracked up! You are right neither one is appropriate for CPR time.

I took a CPR class and that one thing about "Staying Alive" stuck with me! It's the only way I'd know to keep time! :)

Thanks for linking up! Your blog is so intriguing to me--I can't wait to look around!

What a great field trip and really great information. The fact about hot dogs is both fascinating and frightening. I guess I'll keep cutting those into pieces for a few more years.