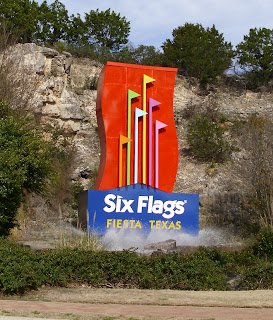 Planning something for everyone meant that EVERYONE was able to plan one place that they wanted to visit, but that didn’t necessarily mean that EVERYONE wanted to go there. Though my husband had already requested that we stop at Crater of Diamonds State Park, when I gave him a run down of our agenda, he didn’t think there was quite enough FUN involved. He suggested that we add an amusement park to our list. So grudgingly, I looked into it. It’s not that I don’t enjoy amusement parks, it’s just, well…let me just say I don’t enjoy them as much as I did when I was a teenager but that’s not the only reason I’m a bit hesitant. In case you haven’t already figured it out, I’m cheap. And amusement parks are not.

However, we’ve been so busy working at paying off our debts that we decided we could splurge just a bit. So I did what my husband asked and found that there just happened to be a Six Flags in San Antonio. Perfect. I was pleasantly surprised to find that when you purchase a one day ticket for $49 you can visit any Six Flags park for the season at no additional charge. Sounded like a good deal to me.

But then I found a better deal and the thrifty side of me was happy! If you purchased your tickets in advance online, you would save $15 per ticket! This price wouldn’t include admission to other parks at a later date, but there isn’t one near us or where we plan to travel to this year so we decided to take the addtional $75 in savings. We even postponed our trip one week so we could be there for opening weekend!

We had season passes to a Six Flags one summer several years ago when the kids were smaller and really enjoyed it. Everything but the crowds that is. This time, we didn’t have any crowds to deal with. We didn’t even wait in line. We bounced from ride to ride to ride. Sometimes we didn’t even get off the ride, we just stayed in our seats and away we went. There are certainly benefits of not traveling during the peak seasons!

Of course the downside of not traveling during peak season is that not all the attractions were open and my kids would’ve loved to have spent time at the water park section of the park.

Here’s a glimpse of our incredibly fun day:

First stop, the front row of Goliath
The coloring didn’t quite turn out right when I scanned this picture, but you get the point. 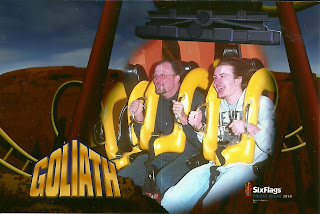 We thought it was warm until we got wet…brrrr… 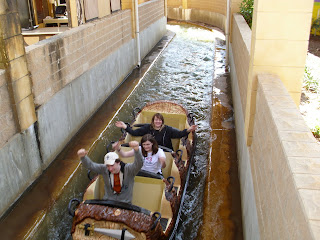 My husband, out to get my daughter. She’s very frightened! 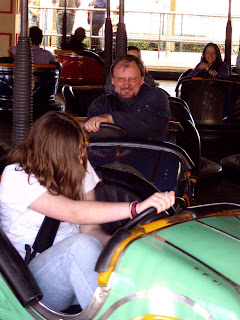 The view from the top of the Ferris Wheel. See how empty the parking lot was? More fun for us!!! 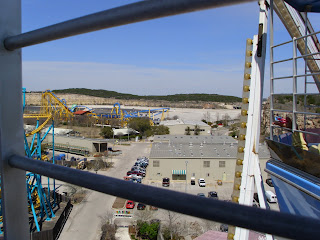 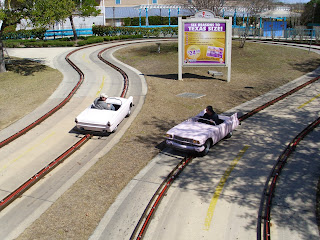 Last ride of the day, The Rattler. The 4th largest wooden roller coaster in the world that reaches the top speed of 65 miles and hour and an portion of it tunnels through the rock quarry walls. Just close your eyes when you’re going down the first hill and the rest of the ride is a breeze. Not the best picture, but we wanted to show you how huge this coaster is. 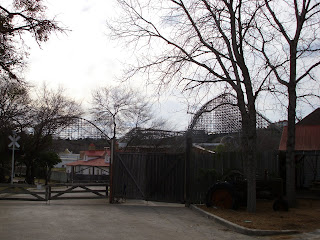 What do you think is the best amusement park you’ve ever been to?

Six Flags is a trip we take often and between Fiesta Texas and Six Flags in Arlington we prefer Arlington. Mainly because of the kiddie area where our 3 yr old could ride 6-7 rides by himself...if he had not been to scared to after his older brother spun him to fast on the tea cups and scared the bajesus out of him. Both places have rides where the whole family can take part.

WOWWW! Looks like fun was had by all! I hear you about the amusement parks....can no longer go on rides that go in circles! Miss rollercoasters though and water slides! Got me thinking I need to get my kids there some day soon! :) Have a good Monday!