What I Learned when I Explored my Hometown 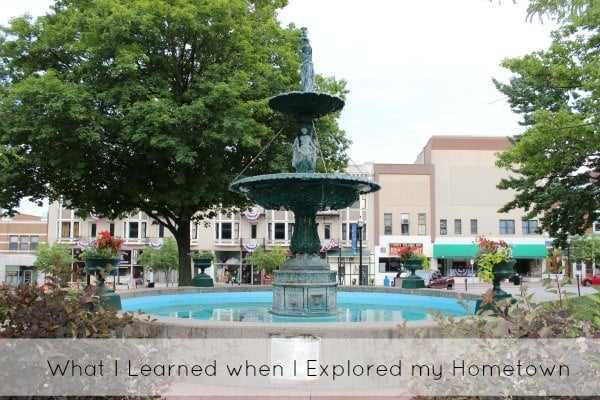 Today I thought it would be fun to take you on a pictorial tour of where I live and share with you what I learned when I explored my Hometown. This isn’t exhaustive. There are a lot of museums, restaurants, parks and attractions that I’d like to share with you, but I’ve already written about some of them. Others will be future blog posts so you’ll just have to stick around.

I kind of inspired myself with the post I published yesterday, Become a Hometown Traveler. After all, what kind of blogger would I be if I didn’t follow my own advice?

With that in mind, I headed out earlier in the week to visit one of the parks in my community that I had never been to. Along the way I passed our local public library. 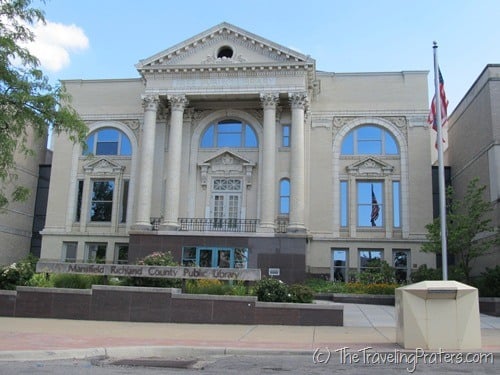 Our library is a Carnegie library, meaning that it was funded in part with money donated by philanthropist, Andrew Carnegie, who believed that all people should have the ability to improve themselves through knowledge, if they were willing. He generously gave money to thousands of communities who desired to open their own public libraries, educating people through books.

A whopping 105 Carnegie libraries were built in Ohio from 1899 to 1912. Not all operate as libraries today, but our library remains. It has undergone renovations and is much larger than it was originally, but much of the outside front of the building with the Classic architecture is original.

Tip: Learn a little bit about your hometown before you explore with your kids, even if you only have time to learn about one building.

It pays to do a bit of research prior to your outing. My daughter was thoroughly impressed with the tiny tidbit of information I shared with her of Carnegie and history of our library. 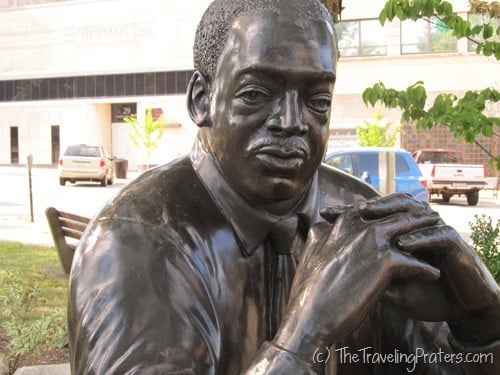 Located in Central Park, on the square, the Martin Luther King, Jr. Memorial was erected in 2007. You’ll find a statue of MLK, Jr., a monument depicting some of his famous words and 39 boulders representing each year he lived.

Tip: This is a perfect example of how what you see in your hometown can be used to pique an interest.

Do you have any statues of ‘famous’ figures around your town? Who were they and what are they known for? Do you see plaques with someone’s name on it? Look that person up. This is a great way to learn more about history and the people that may have shaped your community. 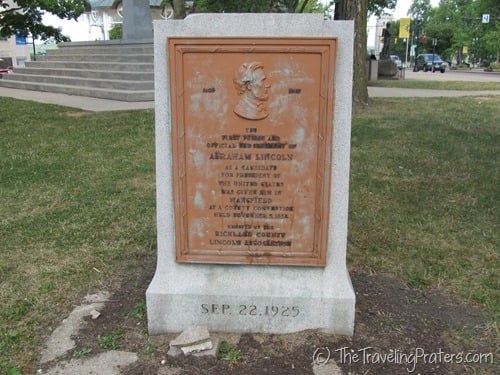 I had no idea that Abraham Lincoln received his first endorsement for President at a county convention held in Mansfield but it’s memorialized on this monument also found in Central Park. 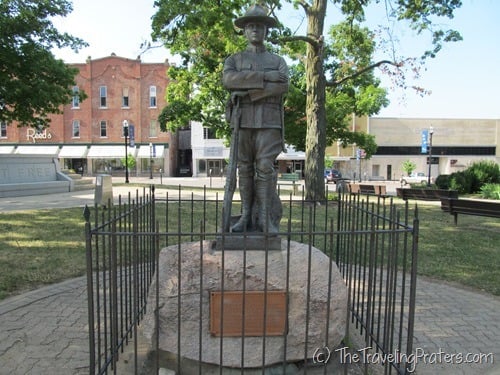 There are also several war memorials dedicated to those who not only have served our country in battle, but who lost their lives as well. With a son that is gearing up for military life, it’s monuments like this that always choke me up and remind me to pray for those that are currently serving in our armed forces and to appreciate the sacrifices they have made. 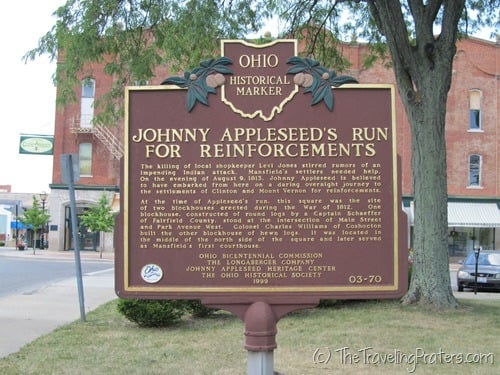 Remember those historical markers that I mentioned earlier in the week? This is what I was talking about. These markers serve to remind us that something important happened in that spot. The markers are a great way to learn about the events that happened in your community without overwhelming you.

Tip: Print some of my free notebooking pages before you head out the door. You can jot down what you learn on your outing and have a neat keepsake. 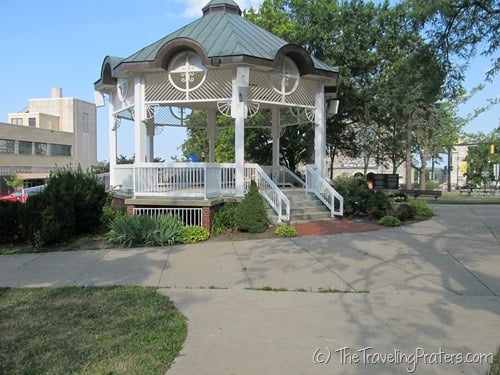 Central Park also has a gazebo where concerts are held and speeches are given. 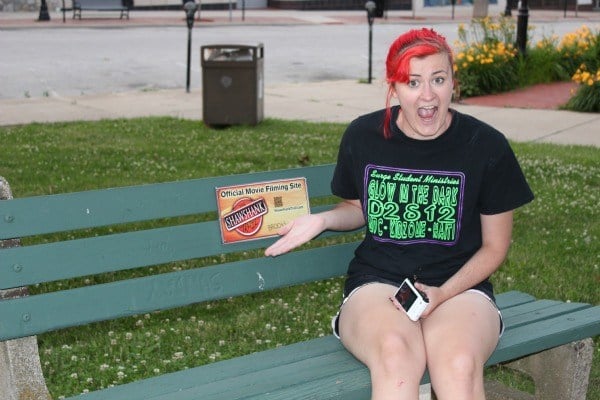 And for a bit of fun, local trivia, you can even see the bench where Brooks fed the pigeons in The Shawshank Redemption. This plaque on the bench shows this is an important stop on The Shawshank Trail. 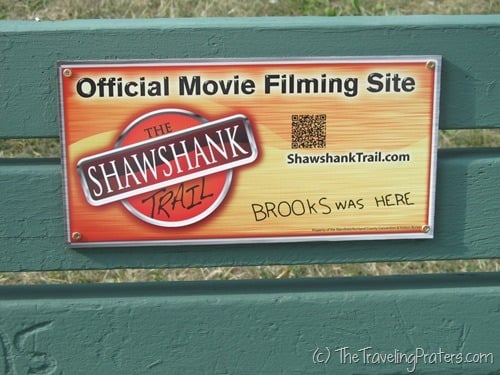 I often hear people talk about how boring our city is, but I’m convinced that any community is interesting, you just have to take the time to dig around a bit.

Have you taken any time to explore your community lately? What neat tidbits did you uncover?

This post is linked to Friday Daydreamin’ with R We There Yet, Mom?

I did a little tourist in my town exploring as part of a challenge for an online group I'm part of. We went down a pathway behind our apartment and ended up in a section of our city I've never been before. Even though I'm in Germany, I don't live in an area with a lot of the popular German-style homes with the dark wood on the outside... or so I thought until we found this area. Pretty cool.

I think exploring your town, learning about what exists right where you are, not only helps you appreciate where you live more than you did before, but helps you become a better traveler when you visit other places, too. Using those approaches when traveling to new places helps you discover things you might not have otherwise.

It took me to traveling to other places to really appreciate where we live.

It sounds like you had a pretty productive time exploring your own hometown. And how neat to discover a new area that you didn't know existed.

We're trying to make a point of exploring our town and the nearby area more too - a lot of underrated gems out there!!

Lisa, years ago we found ourselves in Virginia Beach right along the coast. I was shocked- as in my mouth probably hit the floor- when we popped in at the library and struck up a conversation with one of the locals who told me she'd lived in the area her whole life but had never been to the ocean. But, she was excited to learn we lived near Lake Erie- she'd visited there with family plenty of times. I guess since she was close to the Atlantic Ocean, and could go whenever she wanted to, she just never made the time to go and in her mind, it was more exciting to drive quite a few hours away to visit one of the Great Lakes.

great post.. I feel like we were just there yesterday.. lol.. Loved all the cool places there.

Yeah, I was pretty surprised to see that picture of the Bissman Building on your Facebook page! That's okay, we'll catch up next time you come through town!

It is amazing what you see when you start to really examine a place. Great advice to explore your hometown! I need to give Fort Worth more of a go.

Yes, you should explore Fort Worth- it's one of the places I would love to visit! I really wish there had been more time when I was in Dallas last year because I really wanted to see a stampede!

I'm now going back to watch Shawshank again and look for that bench (and any other sites I can place from your hometown). If Shawshank was filmed in your city, it's coolness factor gets automatically multiplied by three.

Shawshank is one of my favorite movies. I think it's the combination that it was filmed here and stars Morgan Freeman (one of my favorite actors). My husband was actually an extra in the movie so of course I'll have a certain affinity for the flick, even if he's not even shown directly. The movie turns 20 this year so there are special events planned for the occasion.