This post is sponsored by Friskies® and the BlogPaws® Pet Influencer Network™. I am being compensated to help create awareness about Friskies® Pull N Play available at PetSmart® but we only share information we feel is relevant to our readers. Friskies® and Nestle Purina PetCare® are not responsible for the content of this article. 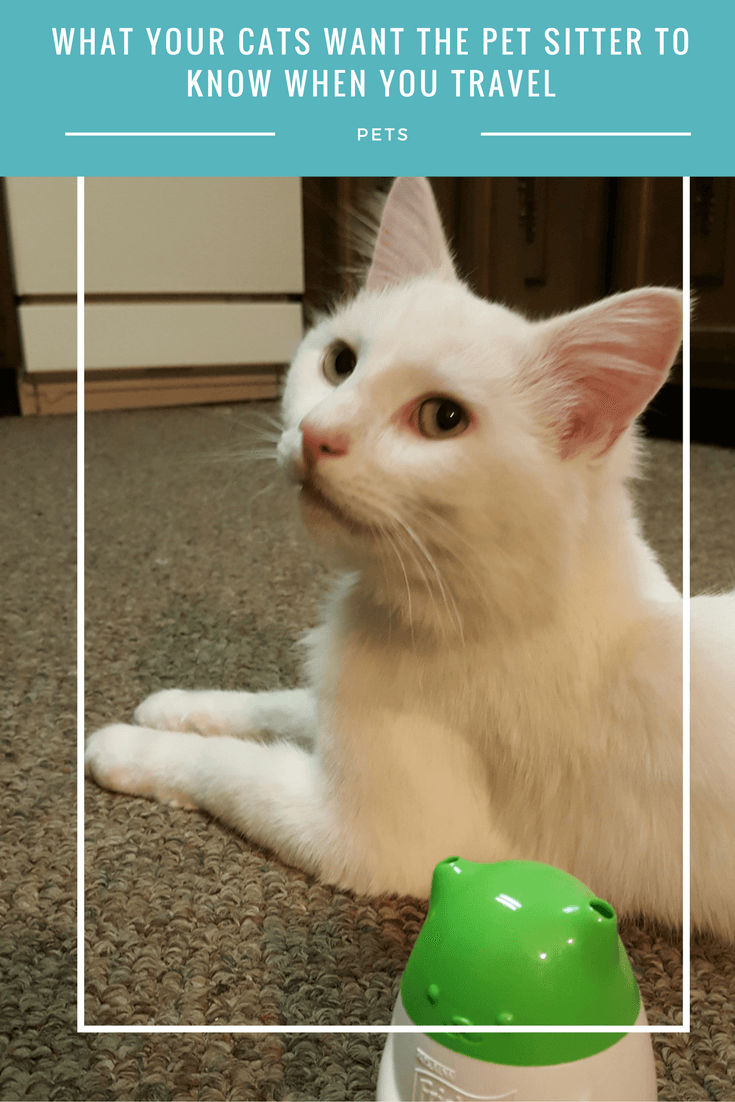 My family has traveled extensively with our dog, but traveling with our cat is another story.

We tried traveling one time with a Siamese cat named Cleopatra. She howled non-stop inside her kennel for hours and when we finally stopped at a rest stop to console her, she escaped to hide under the front seat for the remainder of the trip. Once in our temporary apartment, she ran into the walk in closet and didn’t come out until it was time to return home. That was the last time we traveled with Cleo.

Our new adoptee, Oscar, has a different temperament and if we were traveling for an extensive road trip or in an RV, I wouldn’t hesitate to take him with us. But we no longer have the RV so he gets to stay in the comfort of our home while we travel with a trusted sitter. There are just a few things he wants a sitter to know.

A Few Tips for your Pet Sitter when you Travel 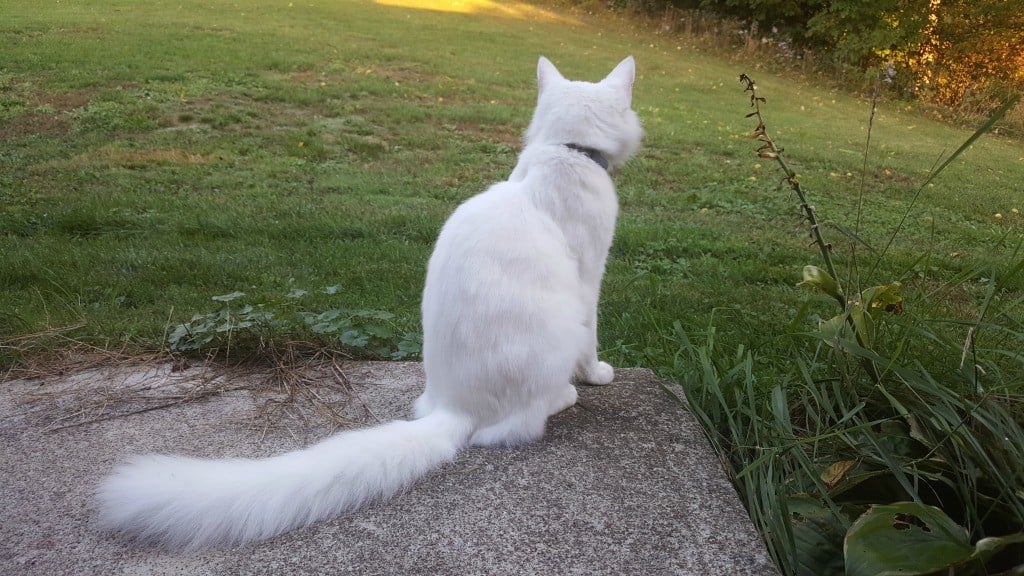 It sounds crazy, because I am not really a scheduled person, but our cat likes routine. I know that first thing in the morning he wants to go outside to do his business. This takes about 15 minutes. He then comes back indoors, expects a treat, eats some food, torments the dog and then, he’s ready to go back outside to watch the birds, catch mice and play.

You probably already know this, but I’ll mention it just for good measure. Our cat likes to sleep and he’ll sleep most of the day, especially if he’s had a late night. He also has his favorite place that he likes to sleep, which happens to be the chair at my computer desk where I spend most of my day. Go figure. 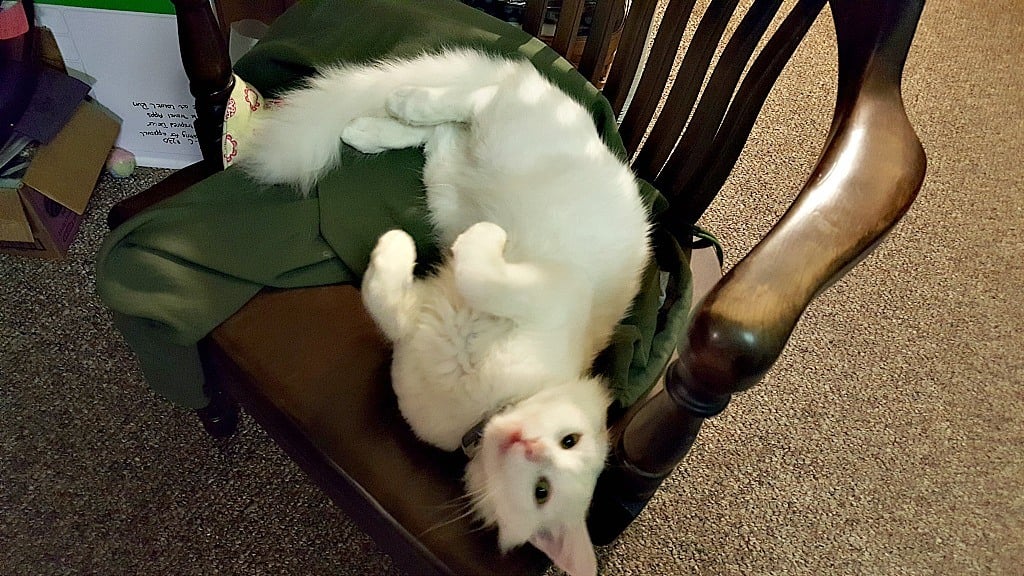 Okay, some cats LOVE to be showered with attention. Our cat is not one of animals. Oscar only likes attention when he wants attention and believe me, he’ll let you know when that is. If he meows as I walk past his chair, he’s ready for attention and wants to be held. If he doesn’t meow and stiffens up when I pick him up, I know he doesn’t really want attention. He’s pretty finicky. Take some time to spend time with the cat so you learn his or her mannerisms.

Okay, so our cat is trained to go outside, which is wonderful! But he does have a litter box for night time poddy breaks. Or for rainy days when he doesn’t want to go out. It’s imperative that his litter box be cleaned out at least once a week- or more if it’s rainy season. 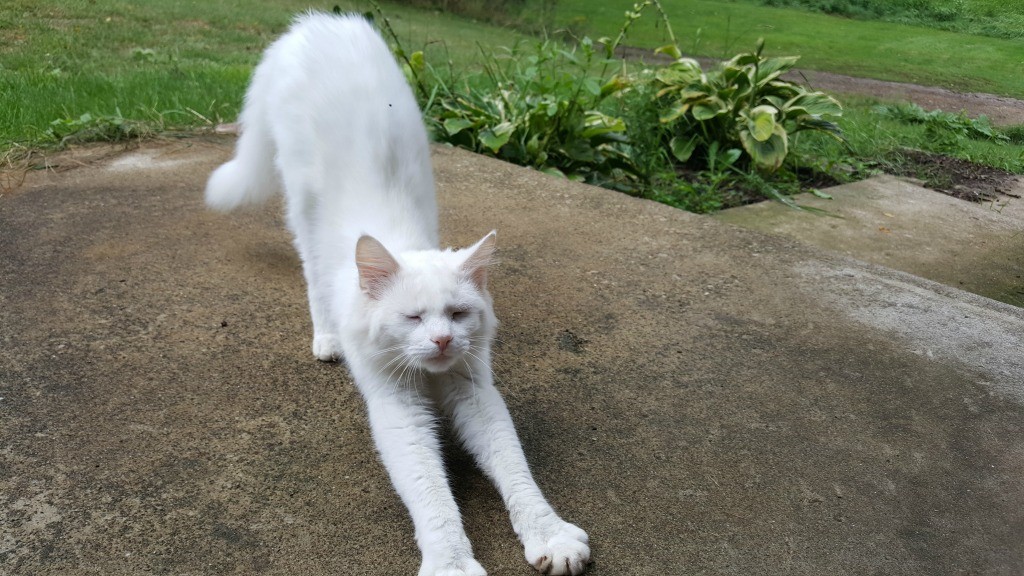 Yep. They like to eat and they are very finicky. Oscar must have fresh food in his bowl at all times. Have we spoiled him? Maybe a little.

You may wonder why I combined these two points when they really could stand alone. Oscar’s treats and playtime are combined. 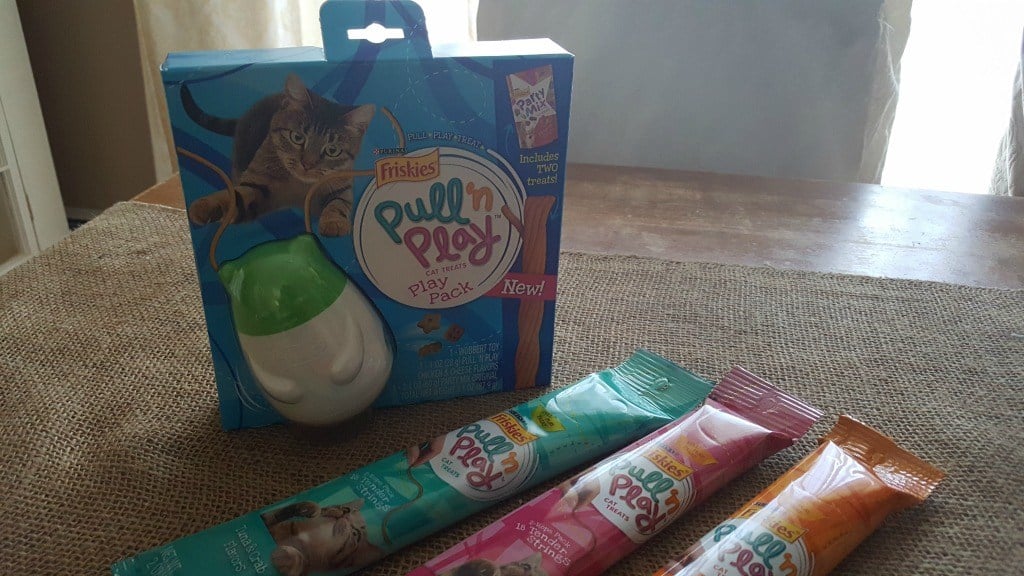 I’ve gotten him quite a few toys since we’ve had him and to be honest, with the exception of his catnip bag, he’s not really interested. Ever. But then, I saw the Friskies ® Pull N Play Pack in the cat food and treat aisle during a recent stop at PetSmart to pick up dog treats. The Pull N Play Pack comes with Wobbert, a wobble toy that dispenses Friskies Party Mix Treats and a pack of special edible string treats that you can thread through Wobbert’s ears so your cat can interact and play with Wobbert. I was excited to show Oscar this new toy I found, but he was lying on the chair disinterested. 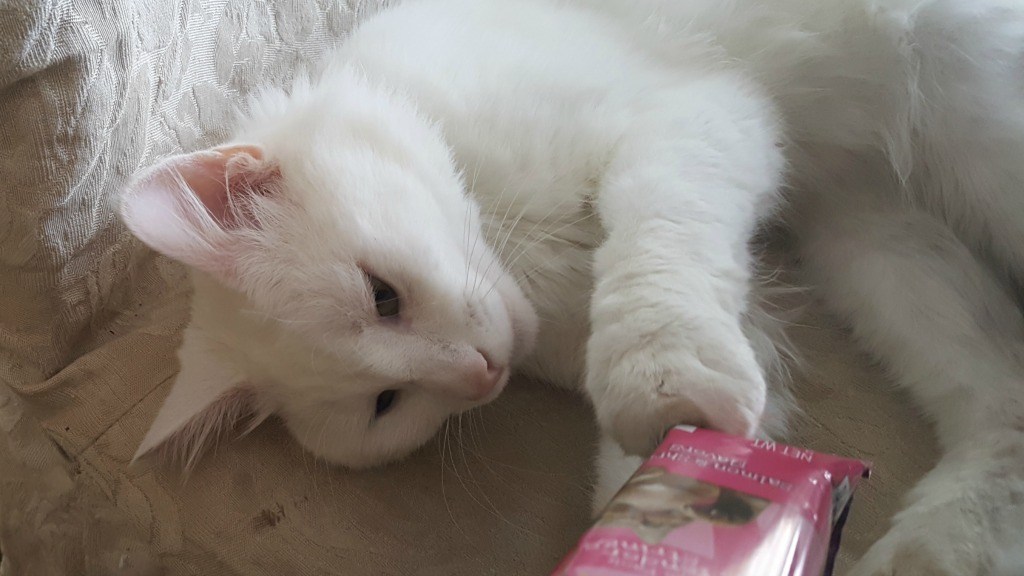 I got Wobbert out of his box and began arranging the treats that I’d picked up- the Friskies Party Mix and Chicken & Cheese edible string that came in the package as well as the extra Salmon & Shrimp and Tuna & Crab edible strings and placed them on the table. This piqued Oscar’s interest and he slowly popped his head up to see what was going on in the dining room. 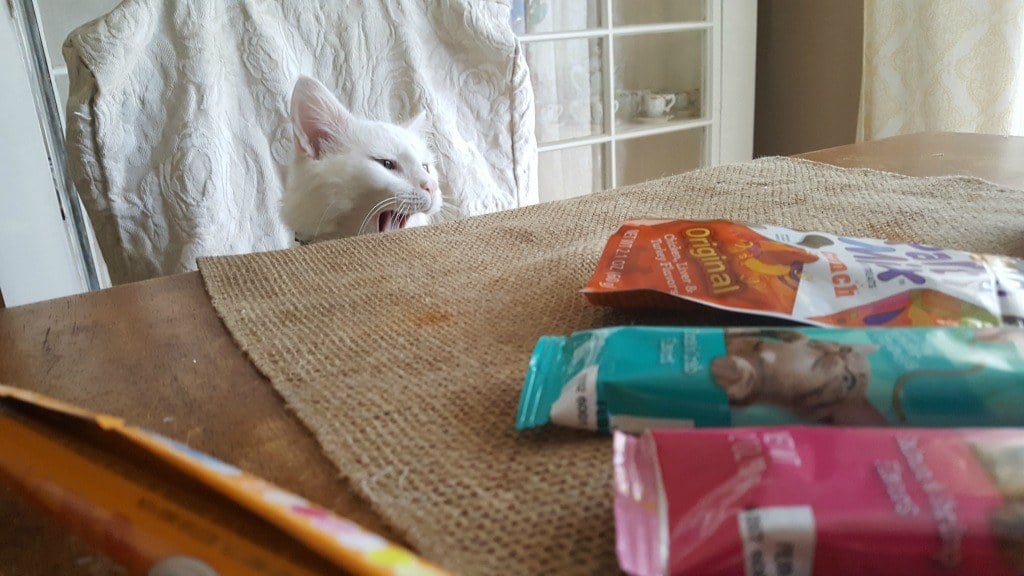 He quickly hopped on the table to get a closer look. I was so excited to see him interacting with his cat treats, that I failed to reprimand him and move him off the table. My bad! 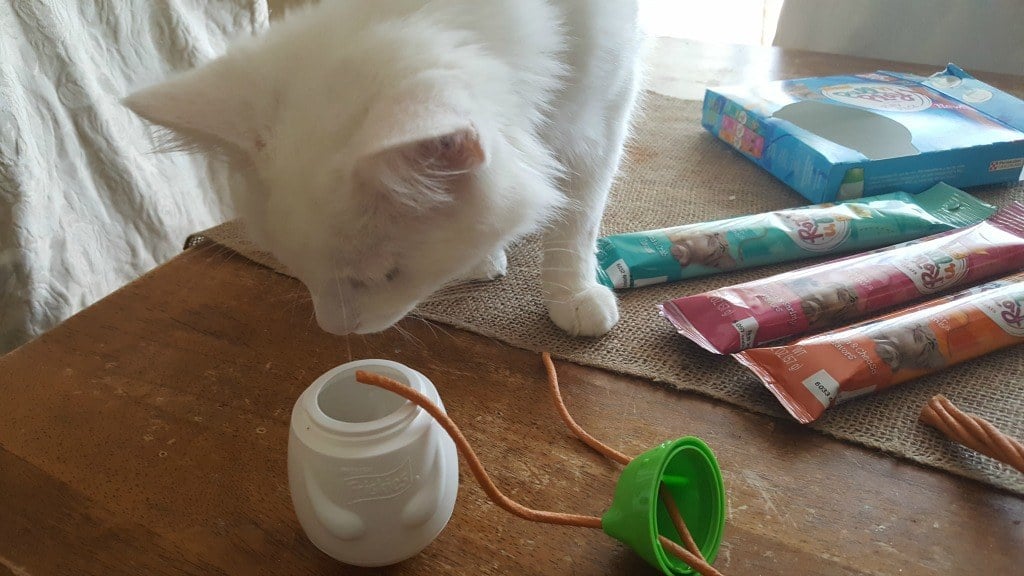 Oscar doesn’t really “play” with Wobbert as I had hoped he would, but he has learned to interact with his new toy. When he sees me pick up his Pull N Play toy, he knows it’s treat time and he is especially attentive. Unfortunately, so is the dog.

So while I’m away traveling, Oscar wants you to know that he is especially fond of the Salmon & Shrimp edible strings. And when he comes inside in the morning from doing his business, he wants some of his Friskies Party Mix Treats. And if the dog is getting a treat, Oscar thinks he should have one as well. Just make sure he gets his evening walk around the pond (yes, this really is a thing). 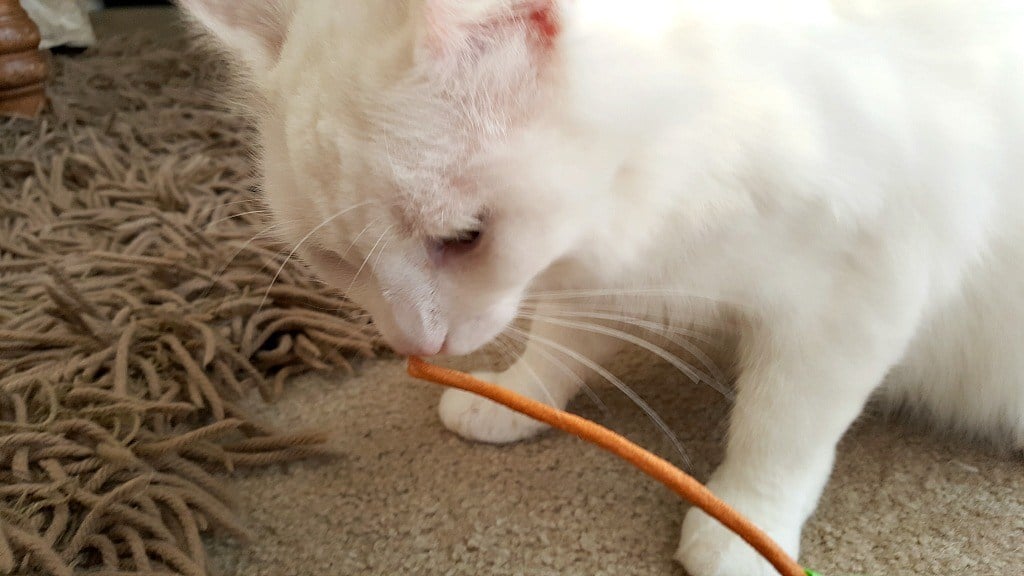 Here’s a glimpse at Oscar playing with his Pull N Play.

Have you tried Friskies Pull N Play for your cat? Would your cat enjoy Friskies treats when you’re traveling? 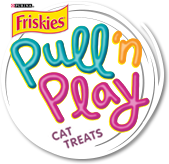 The next time you’re at PetSmart stocking up on Cat Supplies or Food check out the Friskies Pull N Play Pack for your cat and make treat time fun time! You’ll find a PetSmart near you with the store locator.

Comments submitted may be displayed on other websites owned by the sponsoring brand.

This is a sponsored conversation written by me on behalf of Purina®. The opinions and text are all mine.