Why my Visit to Bourbon Street left me Heavy Hearted

I’ve struggled with writing this post since my trip to New Orleans.

I even thought about not writing it but I just can’t get some of my thoughts out of my mind. I know I have readers that won’t agree with me and that’s okay, but I know there are others that will genuinely be interested in what I have to say.

I don’t often share online about my faith, but I don’t make my belief in God a secret. And while my Christian faith may impact some decisions that I make while traveling, what to see, where to go and my reviews may be peppered with my worldview, I don’t often dismiss visiting a destination entirely, because of my faith. There may be elements that I choose to skip, but I tend to think that there is good anywhere and normally the good will outweigh the bad.

When you think of New Orleans, what do you think of? Do you think of beautiful cemeteries, stunning architecture, the upbeat tunes of jazz music filling the streets, boats sailing along the mighty Mississippi or massive plantation style homes? 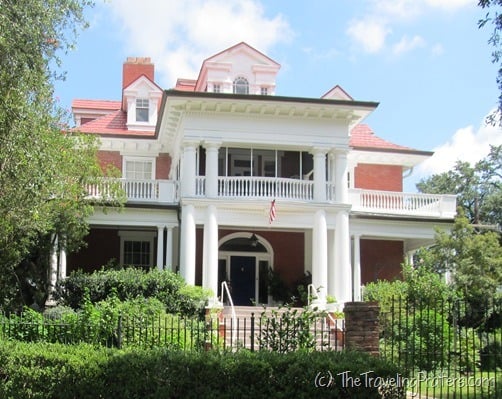 Or do you think of voodoo, Mardi Gras, drinking, gambling and Bourbon Street?

Both would be accurate. On this trip, my second to this city, I discovered firsthand why New Orleans is known as the Big Easy.  New Orleans is amazing and while there is much to love about the city, my visit to Bourbon Street left me heavy hearted.

When I mentioned traveling to New Orleans there was one destination that everyone told me was a must see. My friend and I even met a sheriff in Mississippi that told us that if we didn’t see anything else, we HAD to see Bourbon Street. He told us he’d traveled all over and nothing compared. 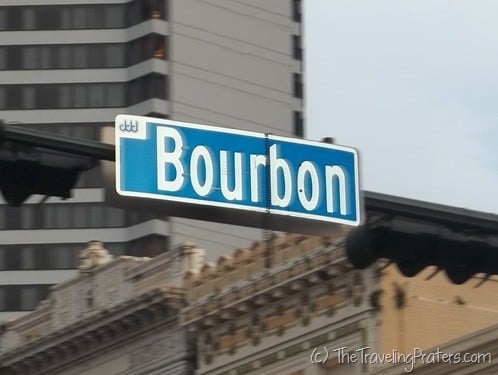 He was right. Nothing did compare, nor prepare me, for the sights that met my eyes.

I would caution you to consider clearly what you will see before you decide to venture onto this famous street, that to some is the very epitome of New Orleans.

Bourbon Street was a few short blocks from the Roosevelt Hotel where my friend and I stayed. You’ll know you’re at the right place long before you arrive. You’ll see the crowds entering the narrow street and hear the blaring trombones, trumpets and saxophones before you even see the street sign announcing that you are in the right or wrong place, depending on how you choose to look at it. 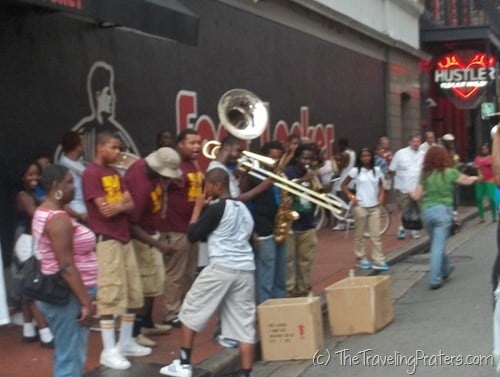 Some may even be attracted to the excitement of the crowds, the flashing neon signs promoting bars, restaurants and showgirls or the general party atmosphere. 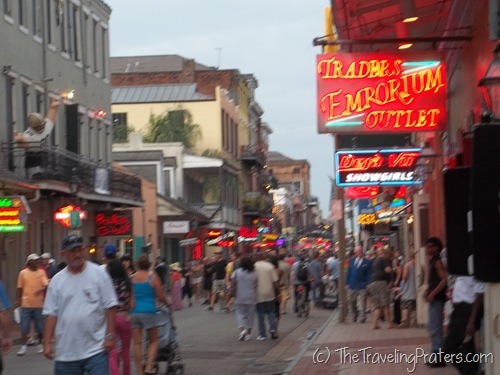 Right away I was thankful that I’d not taken my kids on this trip. I may not want to take mine, but we saw plenty of kids, of all ages.

Some may argue that the ugliness on Bourbon Street is culture, but I disagree. From the pictures of naked or nearly naked women plastered on the storefront windows, to store owners beckoning you to enter their establishments, to the street girls and dancers sharing their “wares” openly on the street, to me this screams sin and not culture. 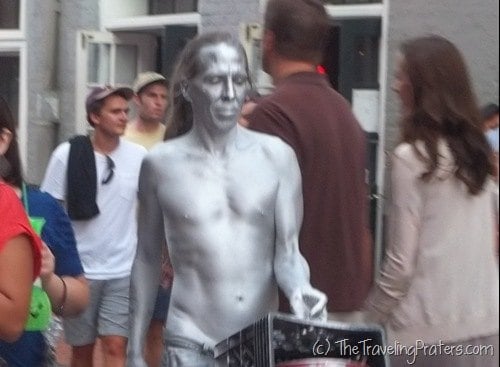 Culture is the beignets at Cafe du Monde, the horse drawn carriages in the French Market, the story of Mardi Gras, Po-boy sandwiches sold at Johnny’s, the panhandlers who shared with me how they had arrived in New Orleans, it is not the trashy beads adorned with a rather large replica of the male anatomy that is sold in the nearby gift shops. 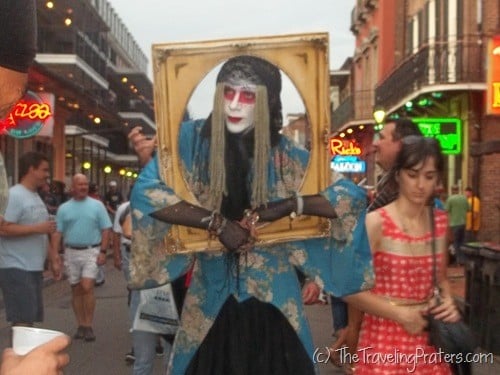 Or the man, dressed like a women in a black skirt, fishnet stockings, heels and a leather bra who was laughing loudly, and lewdly rubbing dollar bills across his chest before placing “his earnings” in his purse. 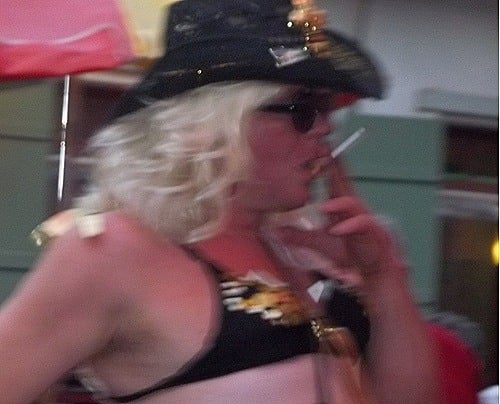 At one point we saw a trio of men with a cross singing hymns who were openly mocked by those passing by.

But what finally did me in was when we arrived a few short blocks away at St. Louis Cathedral to find a statue of Jesus with outstretched arms. Surrounding the outside of the courtyard were tarot card readers and a man offering to tell me the dirtiest jokes I’d ever heard in my life for a buck.

To me, this wasn’t fun. This was heartbreaking. 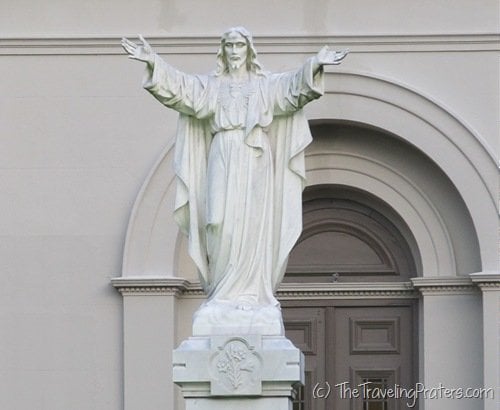 Should you take a stroll along Bourbon Street? I can’t tell you that. I will say that I wish I’d never stepped foot along that famed street. Personally, as a Christian I believe I had no business gawking at the sites. I have a hard time imagining that the Sodom and Gomorrah mentioned in biblical times could possibly be much different than modern day Bourbon Street. My trip down Bourbon Street left me heavy hearted.

I’d love to visit New Orleans again, it really is a neat city and I’m glad that I was able to visit some of the more inviting areas of the city. The French Quarter, the cemeteries, the Garden District. I’ll be sharing more about those areas later this week, but Bourbon Street is one street I wish I’d never stepped foot on.

Thank you for writing this post - and all your others on NOLA. I am traveling there with my kids (10 & 16) in a few weeks and I've done a lot of research. Half of me is excited, the other half frightened. I know we will be staying away from Bourbon St.

Just returned from 5 days in New Orleans last night - We also toured Bourbon St. saw all that you described - I am in no sense of the wrod a "Prude" - BUT I said to my fiend " Wonder if the Mayans are right concerning the end (12/21/2012) as Bourbon St has to be the closest to Sodom & Gomorrah" that one could ever imagine. It is really so sad to see God's children reduced to what I saw - Maybe it's "corny" of me, but as I saw the girls in the open doorways shaking their wares & beckoning for those to come inside for the "show" I couldn't help but think - That is someones' "Little girl" - Much of what I saw was very sad - the big, tall man that wears the short skirt & bra - the young women that have no future and will doing anything for their next "fix", & the two men we saw face down on the sidewalk with people stepping around & over them - We did check & make sure they were still breathing & found a police officer that told us there was nothing they could do for them - the policeman said if they take them to jail they will only send them to a hospital that will not take them - He said if they are breathng they just leave them there. All of this was going on at 1 P.M. in the afternoon. I think it is very sad to see human beings that have let themselves be reduced to being the dregs of society. I feel for them, and also realize many of them do not want ot can be helped. It is sad.

We loved New Orleans...one of my favorite places so far....that being said we did not visit Bourbon Street. We'd heard enough ahead of time to guess we could skip it and be just fine without having seen it.

Tonya, Years and years ago, I visited New Orleans (before the huricanne) and I felt the same way. When we toured Bourbon street I felt sick and was so disgusted that I looked down at the ground and kept walking. My group had to run after me and redirect my course because I refused to look up and be confronted with the filth and what I consider one of the worst sides of humanity. I will never walk down that street again. You are not alone.

Phyllis at All Things Beautiful

I have heard similar comments and some mixed feelings about the Mardi Gras festival. I went to Bourbon Street in 1985 and it wasn't as bad as you describe. A bit bizarre, but not that bad. I guess it is worse all over since them.