I haven’t had a chance to visit all the caverns in Alabama—but I’m pretty sure that when I do they won’t compare to Cathedral Caverns which is located in Woodville, about 35 miles east of Huntsville.

Offering guided tours which focus on the history of the cave, Cathedral Caverns was the brain child of Jay Gurley who bought the property in 1952 and set to work preparing the cave for public tours which cost a total of 25 cents!

Originally called the Bat Cave, the name was changed when Gurley’s wife saw the beautiful stalagmite, stalactite and other cave formations and exclaimed that it looked like a cathedral. 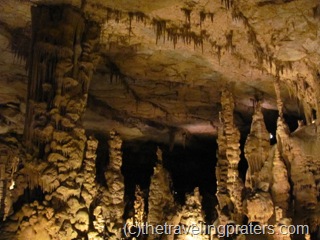 The cavern changed hands several times over the years before it was purchased by the state of Alabama in the 1980’s and improved the cave by installing lighting and cement walkways. The cave reopened for tours in 2000 and today welcome visitors from around the world.

At 25 feet tall and 128 feet wide, Cathedral Caverns claims to have the widest entrance of any commercially operated cave in the world. 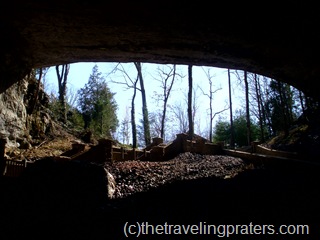 Cathedral Caverns is also home to the largest stalagmite in the world. Known as “Goliath”–it measures 45 feet tall and 243 feet in circumstance. 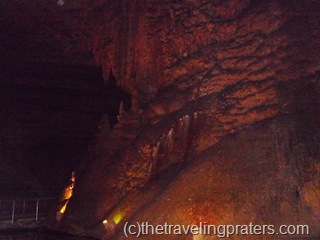 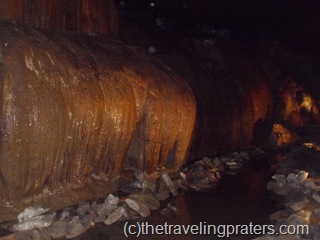 Though we found all of those features interesting, we loved the Cathedral Forest. You can see a few shots of the amazing cave formations towards the end of this short video.

The cave stays around 61 degrees year round so make sure you pack a light sweatshirt and wear comfortable walking shoes. You’ll walk just short of 1 1/2 miles round trip on your 1 1/2 hour long tour. The path is paved and nearly 8 feet wide, with a few inclines and descents along the way. A few spots aren’t that well lit so if you think you’ll have a difficult time, make sure you stay close to the tour guide or pack a small flashlight.

The cave is very open, you don’t have to worry about getting stuck in tight places and most people on the tour should have plenty of head room, with the exception of one or two spots where the very tall should pay close attention.

For those of you that are interested in movie trivia, Disney’s 1990’s Tom and Huck was also shot in the cavern.

Listed on the National Register of Historic Places, Cathedral Caverns State Park is open year round. You can find their current prices, tour schedule and directions to the park at their website.

My wife and I experienced Cathedral Caverns in Woodville, Alabama on Sunday, July 14 on the 12:15 tour. Our guide, Emily, was very knowledgeable about the caverns and made our experience one that will last forever. We were very lucky to only have 1 more additional person with us, which made the tour seem very private. This TREASURE should be a must on your list of sites to see during your lifetime. Worth every minute, all 125 of them. Most tours take 1 1/2 hours for a meer $13. Thanks and we will be back!!!

Glad to hear that you had a great experience at Cathedral Caverns!

Hi Diane, I sent you an email a few minutes ago. Please let me know if you didn't receive it. You can reach me at thetravelingpraters at gmail dot com. Looking forward to our trip on Friday! :)

I had not received any more emails about the field trip for this Friday and lost your email address. Could you please email me with any follow up information. Where will everyone be meeting and at what time?BlessingsDiane