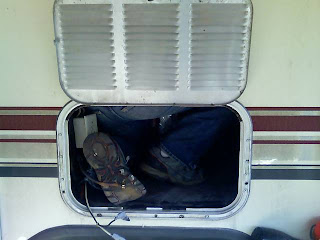 I’m sure there are many errors that full-time RVers make when starting out.

Although my family had hoped to embark on our journey for several years and I’d spent much time reading and researching, we still felt unprepared when the big moment actually came and this led us to make a common error.

Or so we’ve been told.

So if you are reading my post and you are a full-timer, you may be able to relate to what I’m about to write, if you’re reading this because you hope to one day own a camper of your own, please heed this warning before it’s too late.

Our camper was an older camper so it lacked some of the features that are now pretty standard on newer models. One of those features is automatic levelers or leveling jacks (though this product can remedy that problem). The camper did come with a few pieces of boards that appeared that they should be used for something, but to be honest, we really didn’t give them much thought.

After all, when everyone talked about un-level sites, in my ignorance I thought an un-even site would have hills, bumps or potholes and the spots we camped didn’t seem to have any of these characteristics so they must have been even, right?!

And for those of you that have campers, I’m sure you already know why you want to make sure your camper is level-  to ensure that your RV refrigerator is not damaged or ruined.

Well, when our refrigerator quit working, we began to give this a bit more thought. Especially when replacing the frig is a costly $1500-$2000!

That’s a lot of money to invest in the refrigeration unit when we only paid $5,000 for our older camper. But to pull the unit and replace it with a small house model also had its drawbacks. After much thought, we decided that if the unit could be repaired rather inexpensively, we’d go ahead and put the money into it. So off to the repair shop the camper went.

It turned out that the refrigerator wasn’t the only thing that needed to be repaired, the entire converter box was faulty which was not allowing the frig to run properly. A new converter, a new circuit board and $600 later, we were back at our campsite loving the fact that the frig was working again.

That lasted for a couple of weeks until luck would have it, I returned home from the grocery store with food to cram into our frig and realized that it was no longer working.

Frustrated, I called my husband, who called the repair shop, who told us that they would need us to take the camper back to them or we could pay them $130 to come to us.

My husband thinks we may have gotten a faulty part, but didn’t want to put the camper back in the shop because that would mean a hotel stay, which at this point in the journey, I’ve shared is almost an unbearable thought.

My husband also did not want to pay to have the man come to us. For  $130 we could buy the part that was needed. So, my husband decided to do the repairs on his own.

He planned to remove the frig to work on it a bit outside of the camper, but that was easier said than done. So as an alternative, my husband decided to climb into the outside cubby that holds the frig. Some of you will understand what I mean when I say that I was claustrophobic just watching him-  if you don’t, take a peek at the picture that I posted. And to think that this all started because we failed to make sure our camper was level- or so we thought.

We actually learned two lessons with our refrigerator.

The day our refrigerator quit working, another couple at the campground we were staying at also mentioned that theirs had quit working too. At that time we thought it was a coincidence- even though we were parked next to each other.

Big coincidence, right?! It turns out the campground experienced a power surge.

When we left the campground over a month later we found the power converter melted into our power cord. The power surge was likely the culprit for our faulty refrigerator, converter, and circuit board. We’re fortunate it didn’t burn our camper down.

So how could this have been prevented? This product could have protected our RV and costs less than $100.

You can bet in the future we’ll make sure to have our RV plugged into a surge protector. We won’t be taking any chances.

Have you had any problems with power surges when you’ve camped?

How exacting does the bubble have to be in the inner circle versus the outer circle?

I'm not sure how exact it needs to be but you do want it as close to the inner circle as possible.

So how much is the surge protector?

Prices vary based on the unit you select. Starting prices are around $100.

Hi Tonya, Full-timer here having fridge troubles. Not cooling super well and my boyfriend didn't level the trailer the time only time I wasnt there to help him (like I told him to but oh well). What went wrong with your fridge? Was it a fairly easy fix? Thanks for the helpful post!

Sorry for the late response, Ivy. I believe that our faulty refrigerator was actually a result of a power surge that fried most of the main electrical component (whatever it's called) in the RV. We learned our lesson. A surge protector for RV's is expensive, but so is replacing the electric board or frig. :(

I don't care what anyone says, old or new. I always get my camper as level as I can to the refrigerator. That's always been a rule with me. Good read, sorry for the bad luck.

My husband would totally have done the same thing even if a tiny space. He'd rather save a buck than spend it!