What do you get when you combine a great idea, a talented designer and a community willing to donate over 35,000 volunteer hours? The Little Buckeye Children’s Museum, an incredible play space designed to engage your children through creative, imaginative, hands on play! 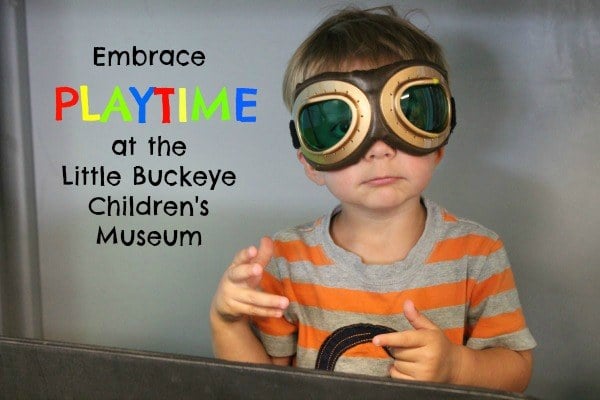 I had the opportunity to walk through this colorful and fun two-story museum with my teenage son over a year ago. At that time the second floor was still under construction, but after touring the bottom floor, I knew the end result would be something magical. I imagined that if my own children were younger, The Little Buckeye Children’s Museum would have been a wonderful place indoors to spend hot summer days, cold winter afternoons and any day in between that found us in need of a boredom buster.

I thought I had a pretty good overview of The Little Buckeye Children’s Museum, but since I’m a mom of teenagers, I didn’t feel that I was really able to fully engage with the space. So, I invited my sister-in-law and nephew to return with my teenage daughter and I,  so I could see the museum through the eyes of a two year old. It also gave me an opportunity to check out the exhibits that are now open on the second floor.

We parked at the public lot across from the Richland Carrousel Park in downtown Mansfield for free 3-hour parking and made our way down West Fourth Street to the entrance of the museum. When we entered there was a class going on in the entrance room so things were a bit loud which startled my nephew a little bit. We paid for our tickets and proceeded further into the museum where I thought my nephew would excitedly run to all the colorful kid-friendly exhibits with all the energy of a two-year old. Instead, he appeared unsure of his environment and that’s when I remembered what it was like to have toddlers in an unfamiliar space. 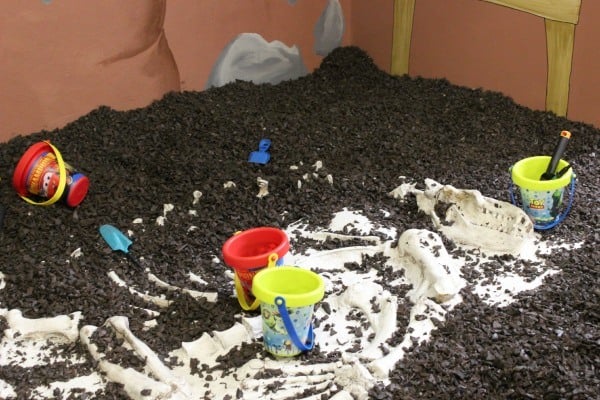 My daughter tried to entice him into the Dino Dig to uncover dinosaur bones, but he wasn’t interested. He also had no interest in climbing in the Treehouse, shopping at Fresh Market, making a deposit at My Little Bank or dressing up in a lab coat in the Baby Doc play area. Just when I was beginning to worry that I’d convinced my sister-in-law to visit someplace her little one really didn’t like, we arrived at the H2O Factory and it became clear that much of the three hours we planned to spend in the museum would be spent in this popular area as his apprehension began to slip away. 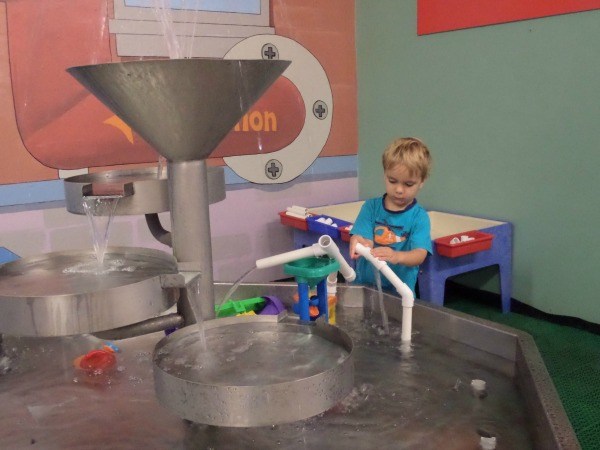 I’m glad I asked my sister-in-law to bring a change of clothes for my nephew, they certainly wouldn’t go to waste. There are rain coats available for the children to wear while they play, but he didn’t want to wear one. We spent quite a bit of time in the water area, but there was a lot of area to cover so we convinced the little guy it was time to move on. 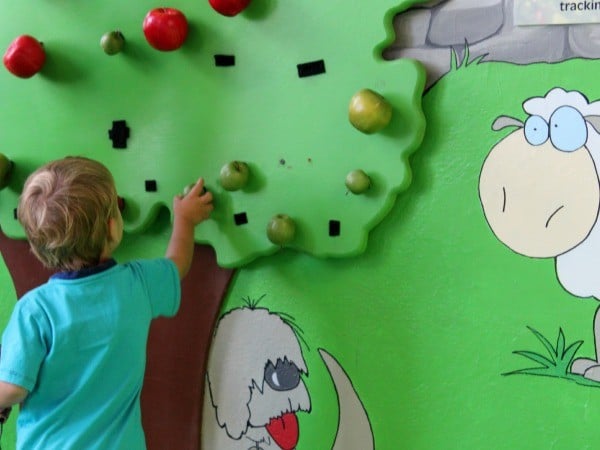 We moved past the Scientist Lab, The Vet, Theatre and Read & Relax room until the John Deere tractor in the Agricultural Center caught my nephew’s eye. He played on the tractor until his mom convinced him to fill a basket with apples from the tree.

By this time it was getting a bit late in the day and I knew our free three hour parking would expire long before we were ready to exit the museum. We decided to pick up the pace and headed towards the stairs to explore the part of the museum that I had come to see, and believe me when I say the upstairs of  The Little Buckeye Children’s Museum did not disappoint! 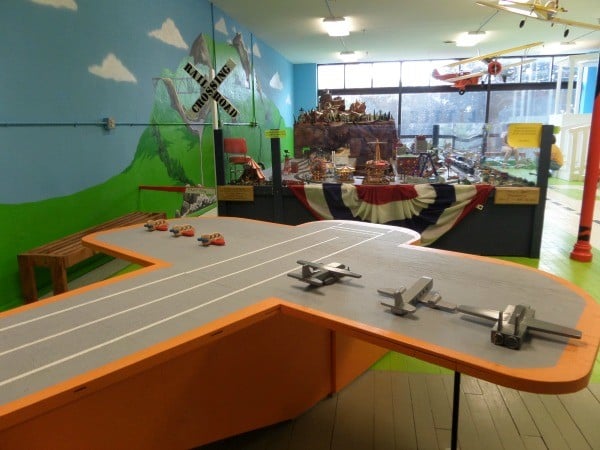 Our first stop in the plane and train room is clearly a favorite among all the visitors, young and old and quickly became my nephews’ favorite room. While he paid very little attention to the colorful planes that caught my eye, he was fascinated by the  the model train that raced along the track. 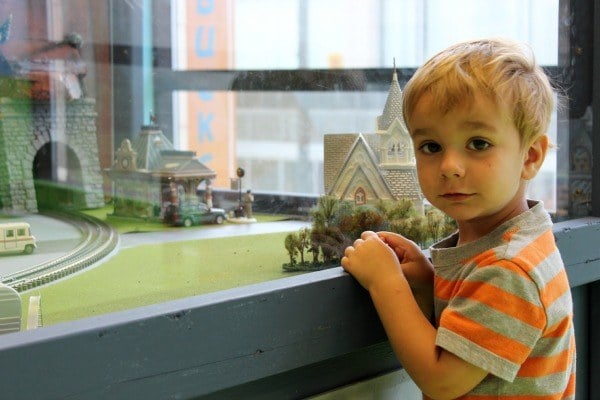 His favorite part of the room was the wooden train set that was set up on the play table by the window.  We enjoyed watching him and listening as he made a soft “choo choo” sound as his train chugged along the track. 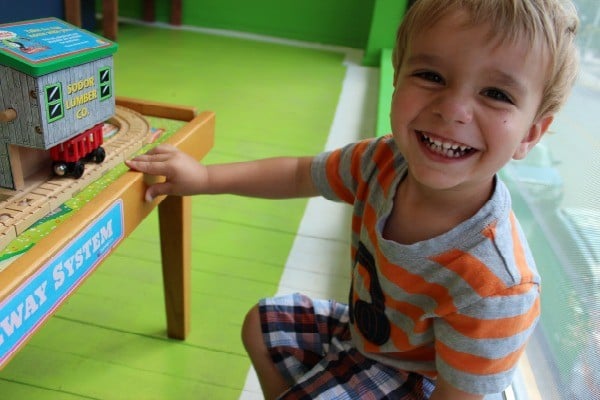 Another adorable photo captured by my daughter, Chelsea Prater.

Clearly the train was the highlight of his day!

Running out of time and with an entire floor of  exhibits, or play rooms, left to discover, we made our way down the hallway.  We passed by the Insectagations, Teeth Time, the Photo Opp, Grafitti Station (still under construction), and the Deconstruction Zone which is for older children and stopped at the Auto Repair Zone. 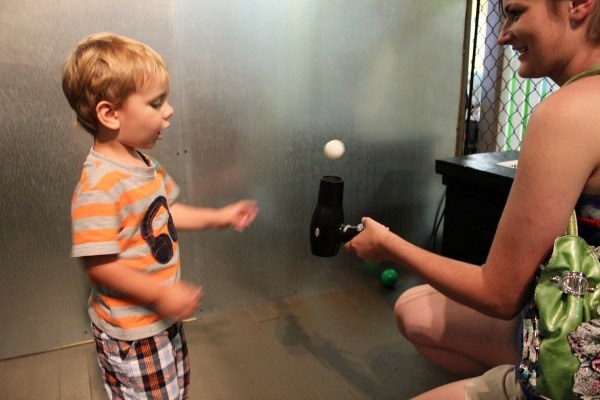 We saw that The Little School House and The 3 Little Bears seemed to be favorites among the little girls visiting the museum as we continued on our way to the Birthday/Food area that resembles a McDonald’s Drive Thru with a colorful mural of one of my favorite paintings on the wall, with a few added characters. 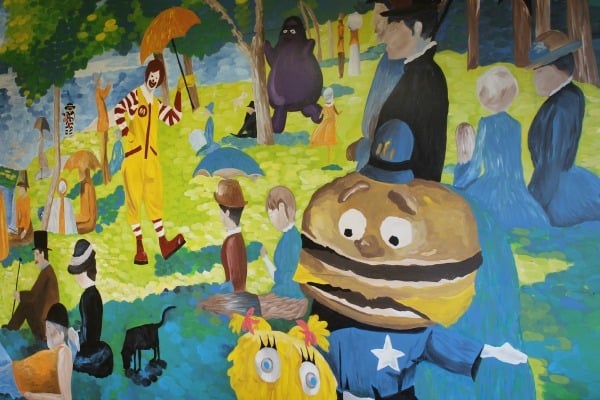 We couldn’t resist one more stop by the train room before making our way back down the steps and out the door, nearly three hours after stepping foot inside The Little Buckeye Children’s Museum.

The museum is geared towards ages 0-12 and I while I think downstairs applies more to the younger crew, I was thrilled to see that some of the exhibits upstairs are great for older kids. 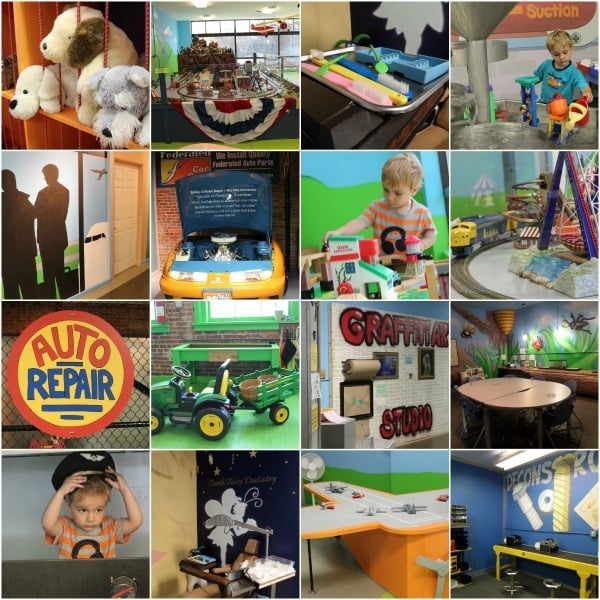 Are you looking for more ideas of things to do in Mansfield, Ohio? Don’t miss my Best of the USA guide to Mansfield to help you plan your visit.

Have you been to the Little Buckeye Children’s Museum? How would you like to win a family four pack of tickets? Well, here’s your chance.

My kids would have a field day here. I'd have a hard time getting them out of here for sure. Of course, I'd have fun too most likely. Thanks for the review.

My kids would love this place. Trains and planes are favorites here.

How fun! We went to the NYC Children's Museum of the Arts today with our little guy and had a blast! Love the hands on aspect. Great pictures!

WOW! Thanks for such a fun informative article! and LOVE the pics!!!!

My kids would love the H2O Factory