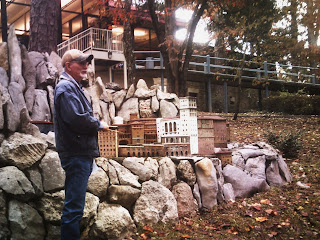 Last fall, the kids and I joined a local homeschool support group for an awesome field trip to Ave Maria Grotto in Cullman, Alabama. Onsite at St. Bernard Monastery, the grotto was created by Brother Joseph Zoettl, a German immigrant that arrived at the monastery at the young age of 14 with the intention of becoming a priest.

When he suffered a terrible back injury, it was determined that he would not be a priest but instead he volunteered to run the power house that required constant attention. It was here that his hobby of constructing miniature buildings began, using whatever materials he could find.

Eventually, his hobby grew into a world renowned work of art and people ventured from around the globe to see the miniature churches, missions and biblical scenes, called “Little Jerusalem”, as well as the focal point of the park, the Ave Maria Grotto which contains the Virgin Mary and other statues.

Today, you’ll find a selection of 125 of the masterpieces that Brother Joseph created on permanent display in a beautiful park like setting on the monastery grounds. 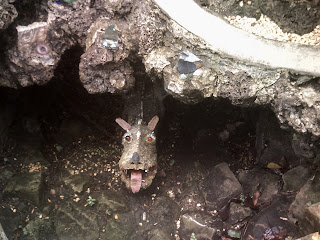 Though the majority of the sculptures are modeled after religious or historical buildings, you’ll find a few whimsical surprises along the trail. A dragon is lurking under Hansel and Gretel’s Temple of the Fairies, chained of course so it doesn’t frighten youngsters and towards the end of the trail you’ll find a Lizard Condo and Chipmunk Crossing. 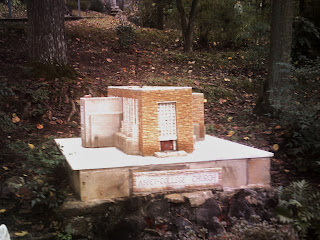 Despite the age of the sculptures, you’ll find they are in impeccable condition, with the exception of Noah’s Ark that was lost believe it or not in a recent flood!

The replicas are maintained by Leo, who worked side-by-side with Brother Joseph before his death in 1961. Leo is also a master stone cutter and is responsible for cutting all of the limestone on the front of the monastery church, which we peeked into before leaving the campus. Built in the shape of a Latin cross, the marble interior of the church is beautiful.

There was a mass in service so we weren’t able to look too closely, but our tour guide told us that there was a disagreement over what foot ware the saints carved along the sides of the sanctuary should be wearing. The compromise resulted in ten figures with combat boots and two with sandals! 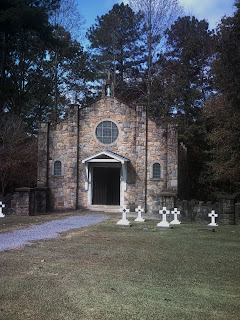 We learned a bit about Alabama’s history, the City of Cullman and have a better understanding of the Catholic religion. If you’d like to visit this attraction that is listed on the National Register of Historic Places, I’d highly encourage it. Just make sure that as you walk by you keep in mind that all of these marvelous miniatures were fashioned essentially out of trash and discarded building materials, take your time and pay special attention to all the detail.

If you’re just passing through Cullman, you’ll find a wonderful quiet picnic area beside the parking lot; I’d stay and linger awhile. The kids and I decided this is probably one of the best field trips we’ve ever been on, but I’m sure part of it is because we had an awesome tour guide, who just happened to be a full-time RVer at one time!

Have you visited Ave Maria Grotto? What is your favorite roadside attraction?

This was one of my favorite attractions! After living in Alabama my whole life, I wanted to explore more of the state, and added this as a stop on a road trip to Florence. I laughed about how ridiculous and silly I thought this attraction would be, but I had to eat my words. It is still one of my favorite memories and travel locations!! It was absolutely beautiful, spectacular, and it really touched the deepest levels of my heart. My affection for Ave Maria Grotto has only grown. I can’t recommend visiting enough!!!!

I enjoyed it so much more than I thought I would. Ave Maria Grotto really is fascinating.

I have a little gift for you at my site. Happy Easter. It is time sensitive!

We lived in Alabama for 10 years when I was a kids and I remember taking a field trip with school to the grotto. Thanks for sharing your visit.BlessingsDiane

That looks like a cool place to visit! I hope we can get there some time. I posted a link to a field trip we took a couple of years ago.

Great post- my trip to the zoo pales in comparison.......