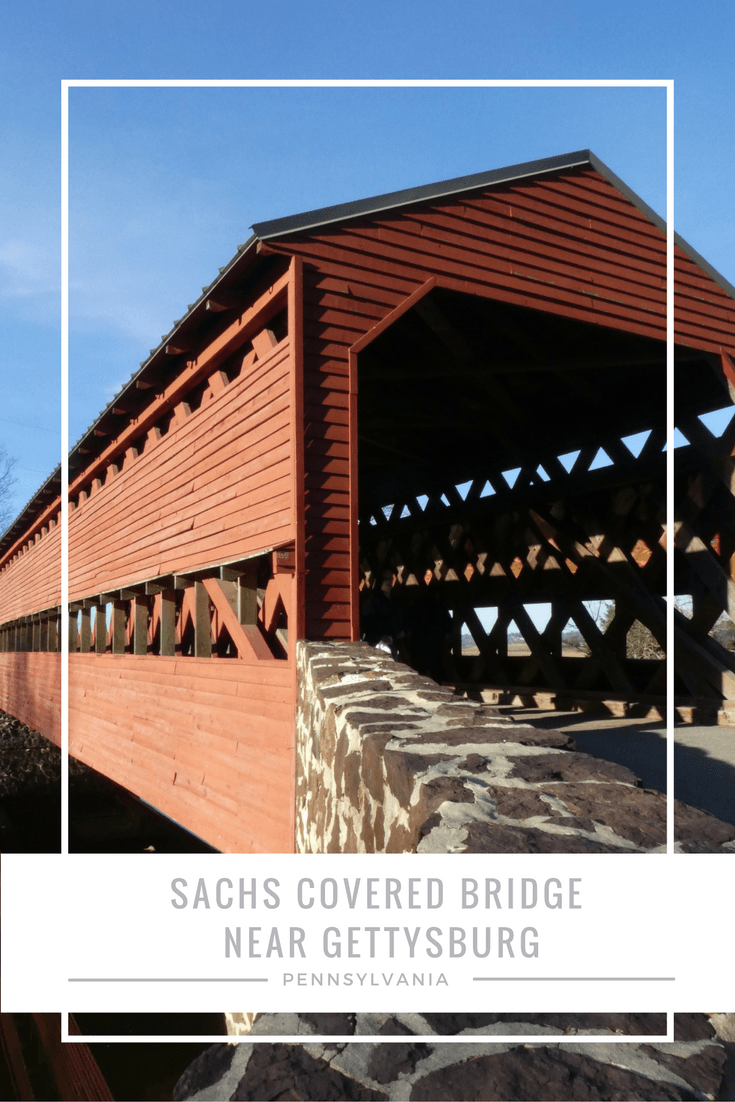 The Sachs Covered Bridge near Gettysburg is one of two remaining covered bridges in Adams County in Pennsylvania. Built in 1854 by David Spooner, the bridge open to foot traffic, spans Marsh Creek.

The bridge is a 100-foot long Town truss covered bridge that sits on a dead-end road with parking for several vehicles. A slight incline leads to the bridge and there is also a ramp that is not quite as steep for those who are in a wheelchair or have mobility issues. There is a trail on the other side of the bridge that leads to a short walk through the woods. My family didn’t have time to explore beyond the bridge, but the setting of the bridge is very scenic and picturesque. We arrived in the morning and there were several photographers there as well as a man fishing and others on the trail. 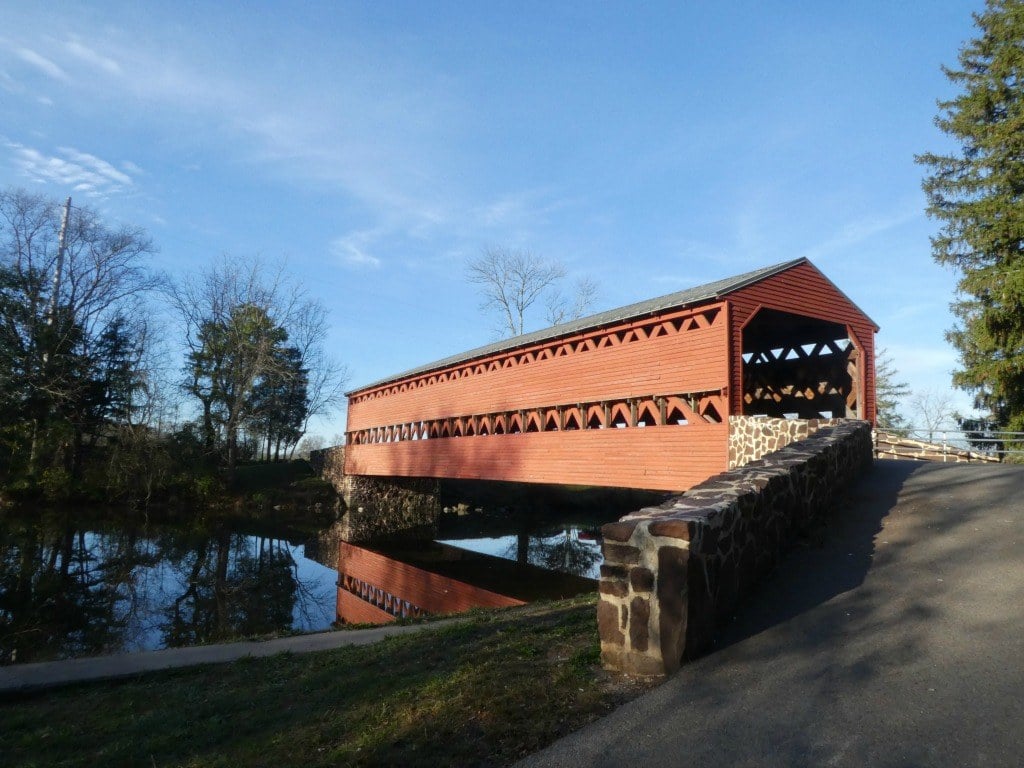 About the Sachs Covered Bridge

During the Civil War, this bridge was known as Saucks Bridge and is said to have been used by both armies during the Battle of Gettysburg. The bridge is also said to have been the site of a triple hanging of three Confederate soldiers that deserted the army. Rumors circulate that spirits have been caught in photographs taken at this site. 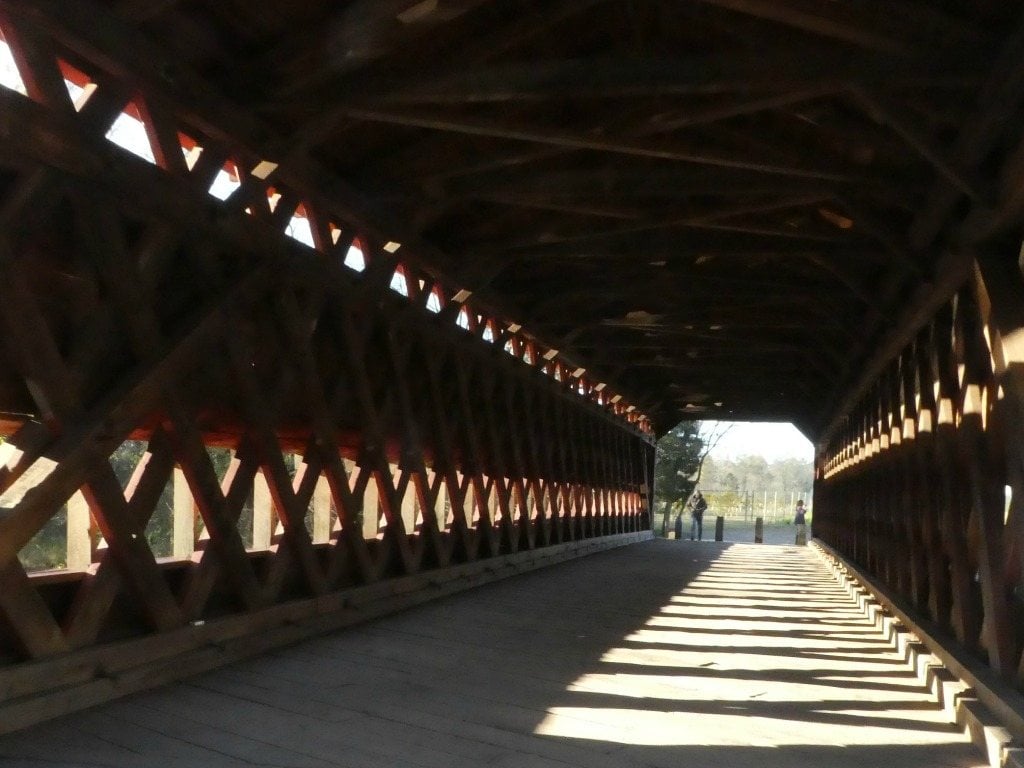 The bridge has been designated the “most historic bridge” in Pennsylvania in 1938 by the Department of Highways, the predecessor of the Pennsylvania Department of Transportation. It was closed to vehicle traffic in 1968 and listed on the National Register of Historic Places in 1980.

The bridge was damaged by a flash flood in 1997 that knocked the bridge off its foundation and carried it downstream 100 yards. The bridge was restored with nearly 90% off its original truss and lattice in place and rededicated on July 21, 1997. 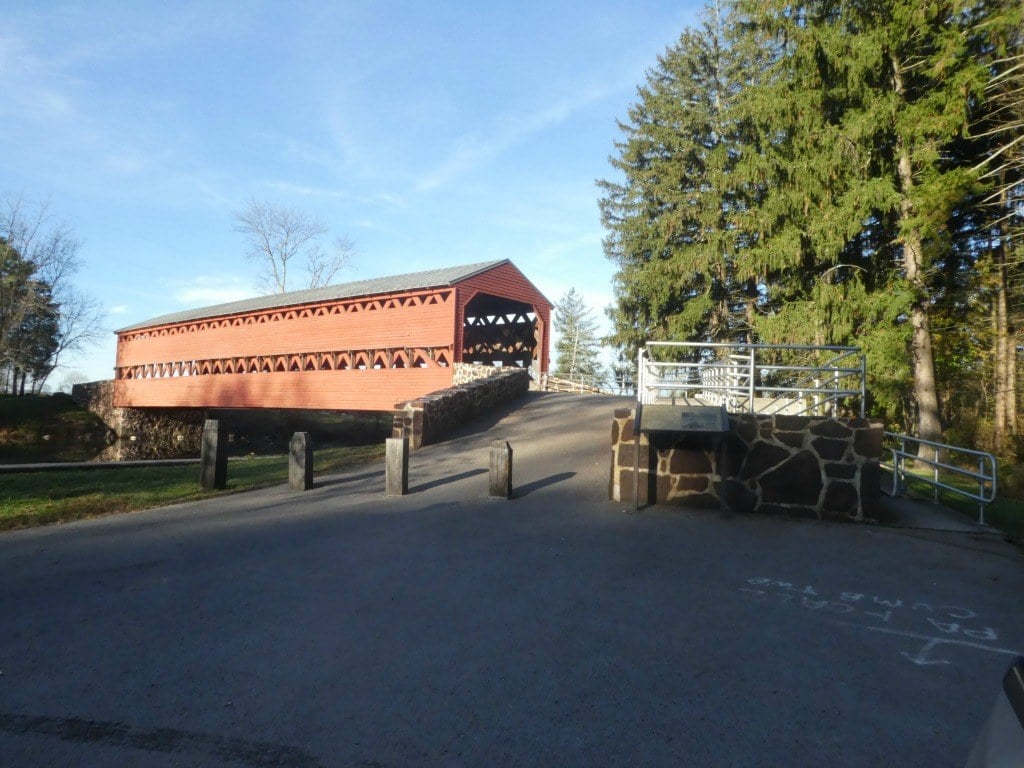 This Pennsylvania landmark is owned by the Gettysburg Battlefield Preservation Association. The bridge is located on Waterworks Road and is located minutes from the Eisenhower National Historic Site and Gettysburg National Military Park.

Adams County boasts four covered bridges. The Anderson Farm Covered Bridge and Heikes Covered Bridges are both on private property and visible from the road, while the Jack’s Mountain Covered Bridge remains open to vehicle traffic.

Gettysburg: More than a Battlefield

What a great family trip destination. I love the gorgeous bridge. Your photos are really beautiful.

It's a lovely place to visit and I love that it has such a rich history as well. The bridge is stunning and it definitely takes you back in time.

What a gorgeous bridge and what a wonderful way to to experience some history! I love knowing that the bridge was restored! I hope your post encourages more visits to this historic monument- I know it has inspired me to take my kids!

Yikes to the soldiers! I'm glad to hear the bridge was restored, thats kind of amazing actually.

Wow, I love this covered bridge. Great design and I am sure the kids will appreciate it.