Located a short drive from Columbus, the Hartman Rock Garden in Springfield, Ohio, is considered one of the best examples of folk art in the county.

It’s not a secret that I love roadside attractions. I estimate that over the years, I’ve easily stopped at over one hundred. But of those, a small percentage have been so remarkable that I would visit them repeatedly. The Hartman Rock Garden is one of those.

Do you want to learn more about the Springfield rock garden? Maybe you just want to find Hartman Rock Garden photos to see if you think it’s worth a trip. That’s fine. You’ll find plenty of information and images in this post and if I don’t answer your question, please leave a comment and I’ll try to find the answer for you.

If you’d like to read more about Springfield, check out the best things to do in Springfield Ohio.

The Hartman Rock Garden is classified as folk art. You may wonder what the difference is between folk art and fine art.

Don’t worry, I did too, so I looked it up to be clear.

Those who create fine art learn and hone their skill through rigorous formal instruction, while folk artists are largely self-taught.

The History of the Hartman Rock Garden

The garden’s creator, Harry George “Ben” Hartman, didn’t set out to make something grand. He was simply a molder at the Springfield Machine Tool Company foundry who had too much time on his hands when he was laid off during the Great Depression. To stay busy, he made a cement fishing pond in his backyard.

By the time that was completed, he was hooked. His rock garden began to take shape as he constructed handmade figures and over 50 structures. As you walk through the garden, you’ll see three main themes; history, religion, and patriotism.

All three are symbolized in the large Tree of Life, that is made of Red Granite and Mixed-Stone. One of his favorite pieces, the tree, symbolizes three areas of his life that he held dear, his love for his country, school, and church.

It’s estimated that approximately 20,000 stones were used in the construction of the tree that stands roughly seven feet tall.

As you look around, you’ll find miniatures of local homes and stores, the White House, the Betsy Ross House and other properties that were significant in history. Many tell a story.

These miniature soldiers represent Stonewall Jackson and his army as they pass by Barbara Fritchie’s House.

She is said to have waved her American flag at his Confederate army, saying “Shoot if you must this old gray head, but spare our country’s flag.”

This tiny figure looking out of one of the attic windows is Fritchie. You’ll find scenes like this everywhere you look.

From Sitting Bull to animals loading onto Noah’s Ark to a depiction of the Last Supper, each scene was painstakingly created by Ben.

I was amazed by the attention to detail evident in the artsy rock scenes.

Ben returned to work in 1939 after a seven-year layoff, having fashioned hundreds of thousands of stones and buckets of concrete into a piece of folk art that is considered one of the most esteemed collections of folk art in the United States.

Ben died in 1944 from lung disease due to his job at the foundry, but his wife, Mary, stepped up to maintain the garden, caring for the flowers and welcoming visitors until her death in 1997.

The garden began to deteriorate, and in 2008, the Kohler Foundation out of Wisconsin stepped in to save the day.

The foundation is an art preservationist group and has worked on projects like the art environment of Pasaquan in Georgia to restore and preserve them for future generations to enjoy.

The restoration was completed in 2009 and Kohler, who had purchased the property, transferred ownership to the newly-formed Friends of the Hartman Rock Garden.

The garden is a true treasure and delight for all. Young and old will be amazed at the displays and scenery as you view the unique work of art at the rock garden.

It’s hard for me to imagine the patience and dedication that went into creating such a heartfelt piece of work that has been enjoyed for over 80 years.

If you’re like me, you’ll visit once, and then you’ll make an excuse to visit again to see all that you missed the first time.

Here are a few tips to help you get the most out of your visit to the Hartman Rock Garden.

Guidebooks are available on site and at the Greater Springfield Visitor Center.  The small book will tell you about Ben and his wife, Mary as well as describe the various sculptures and buildings on the property and includes a handy map for easy identification.

While you could stop and “see” the garden in as little as five or ten minutes, the rock garden is storytelling at it’s finest and deserves to be appreciated.

Plan to spend a minimum of 30 minutes on the property but I’ll warn you now that if you truly look at what you see around you, you’ll find so many details that it will be hard to see it all on your first visit.

Look high, look low. Stoop down to look inside the buildings. You’ll be amazed at the detail that Ben put into the sculptures.

There are no restrooms on the property, so make sure you stop for a poddy break if necessary before your arrival.

I REALLY wish I had researched this attraction a bit more before my visit so I would have been aware of the behind-the-scenes tour, which allows you to learn more about the collection, and the ongoing preservation and to see some of the figures that Ben created that can no longer be kept in the garden.

Find Hotels & Airbnb’s near the Hartman Rock Garden and book your stay now! 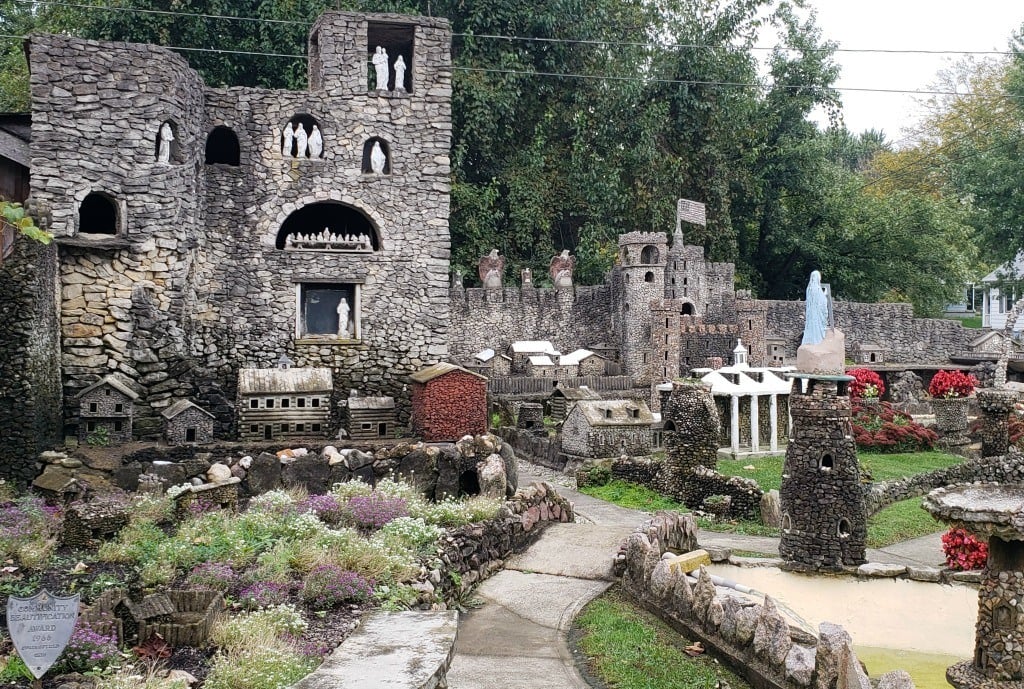 Have you been to the Hartman Rock Garden in Springfield? If you have, what was your favorite scene?

This post was originally written in October 2018 and updated in July 2021.

It's very impressive. It amazes me that one man's hobby can turn into a garden that has been enjoyed for generations.

The Hartman Rock Garden looks like a labour of love! Finding gems like this is one of the joys of travel. I love gardening and seeing your photos makes me want to go out and fix up my own garden!

It certainly does! And his love of history certainly shows through.

Now this is the kind of off-the-beaten-path attraction we like to explore. What an interesting story about the Hartman Rock Garden. And well done to the Kohler Foundation who stepped in to restore the garden. PS: I love the miniature soldiers!

Aren't the soldiers the cutest? I love all the detail in the garden.

I love that level of creativity and drive to bring the stone garden to life. The passion is evident in all the amazing pieces that have been sculpted, each with a story to tell. It's quite impressive and it looks like the secret treasures are in the details. You are right about researching activities beforehand, a behind the scenes tour would be really cool. Great review!

Wow! This is definitely a unique site! I also love folk art and it's always nice to bump into a site like this. I like how he combined the history, religion and patriotism themes. And the fact that he used 20,000 stones is pretty impressive. Will make sure to stop when in the area :)