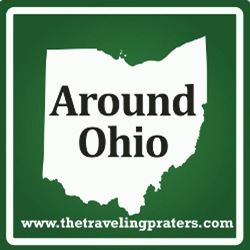 It was MY day and I was able to plan whatever I wanted. Normally, I’d have known months in advance what I wanted but this time around, I was clueless. There was plenty I wanted to do, like hop in the truck and drive to Niagara Falls since two of our kids have never been there, or drive to Cincinnati for the Pompeii exhibit or head back to Hocking Hills. I thought they were all great ideas, but the people I live with, a.k.a. “the family”, just weren’t budging. They wanted something close to home. I have to admit, there isn’t a shortage of places to go in Ohio, my problem this particular day was narrowing down my options. So, I wracked my brain, settled on three possibilities that I thought would appeal to my husband and kids and took a vote. 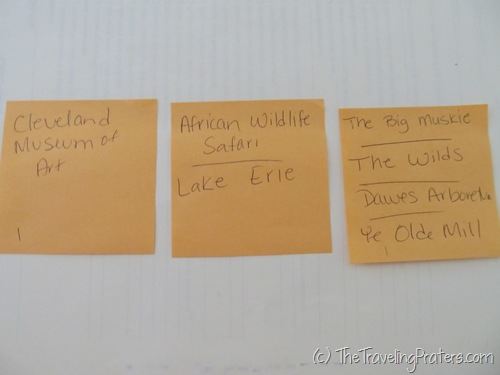 I wrote my Top Three ideas on Post-it Notes and posted them in the hallway for the kids to look over. There may have been a teeny, tiny chance that I rigged the vote to swing towards my top choice.  I’m not proud, but one of those top three choices includes ice cream and my kids and husband LOVE ice cream. Adding their favorite food to the mix pretty much guaranteed the deck falling in the direction of my choice. Of course, they may not fall for it again, so I’ll have to be a bit sneakier next time around.

We set off for Southeast Ohio to visit The Wilds in Cumberland, Ohio and to break up the trip, we stopped for ice cream at Ye Olde Mill- where Velvet ice cream is made. I had also planned to stop at Dawes Arboretum but it began to rain so we pressed on towards our destination.

I should mention that the roads leading to The Wilds get a little bit curvy. I have one teen prone to car sickness so if you, or your child, have the same problem, you may want to take precautions and pack your motion sickness meds. 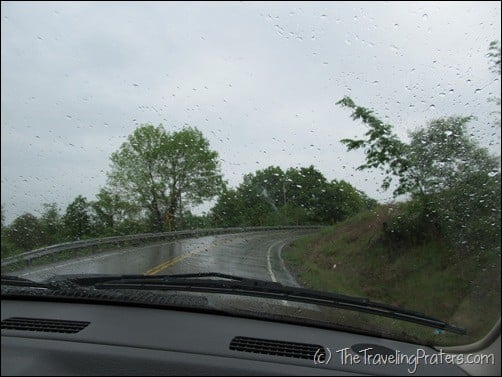 After 2 1/2 hours, we arrived …about the same time as the rain really cut loose. 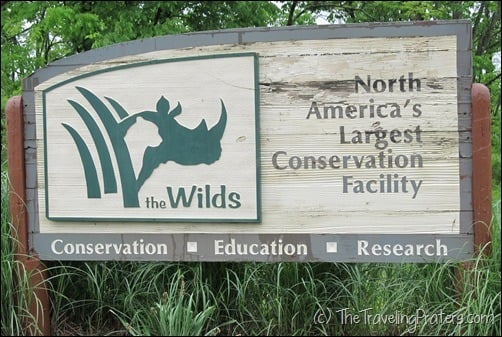 When you arrive at The Wilds, you pay $5 (unless you are a member and then there is no charge) to park in the bottom parking lot. You will then catch a shuttle for a quick ride to the top of the hill. 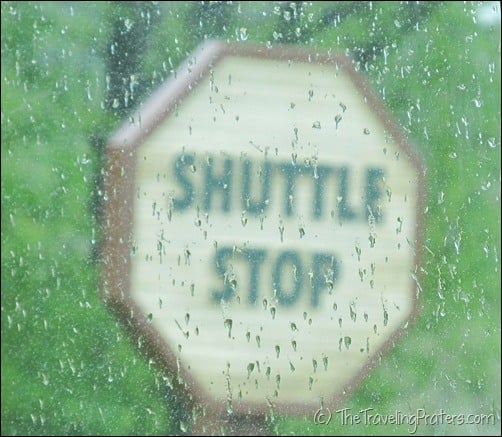 The shuttles run pretty often so we basically stepped out of our truck, grabbed our sweatshirts, rain jackets or ponchos and hopped on board. 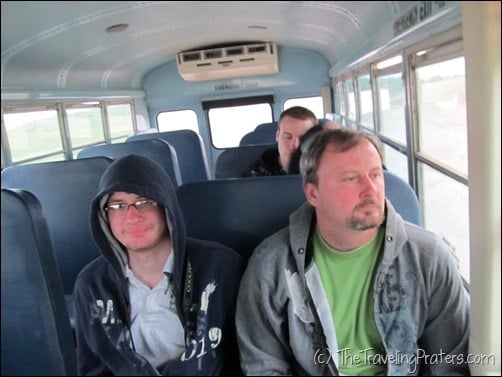 The shuttle driver welcomed us on board and dropped us off at the Johnson Visitor Center, where you can determine what tour you’d like to take, purchase tickets, go to the restroom, buy and eat snacks and hang out until it’s time for your tour to depart. Most tours run every 10 to 30 minutes, depending on which one you select. 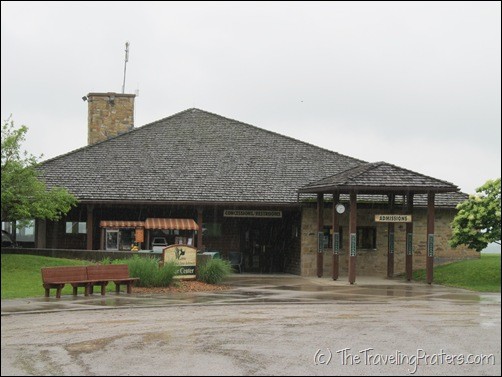 We didn’t have to wait long for our tour to begin, but while we waited, my son couldn’t help but imagine that he’d chosen a different tour… 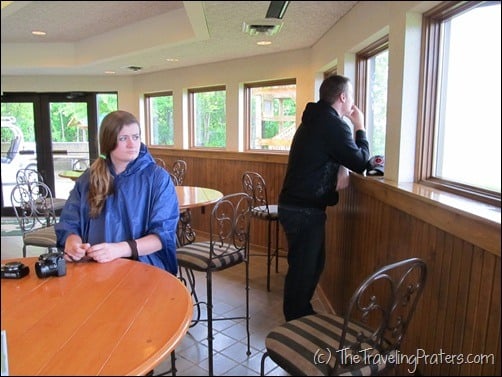 ..the zipline…2 hours…10 platforms…zipping over wild animals…how much fun would that be?! 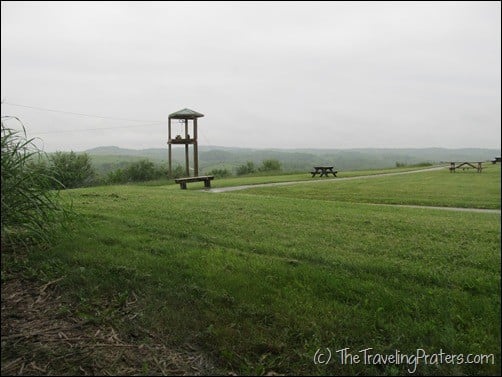 We’ve been to The Wilds several times, the first time was in 1996 when I was pregnant for my daughter. We’ve always gone on a regular tour in a closed bus so this time we decided to take an Open Air Tour- which I would highly suggest. It does cost a bit more, but it is well worth it. Even in the cold and the rain, we had a great time.

Just look at my daughter’s face, it’s got “This is awesome” written all over it. 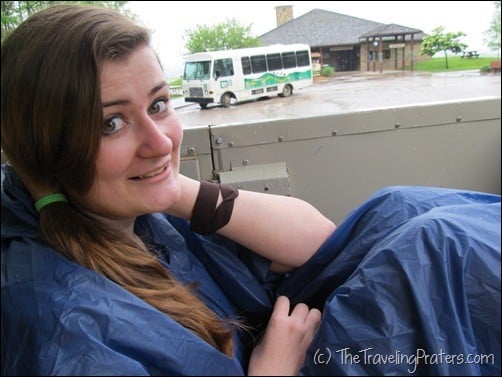 When I say open-air bus- that is exactly what I mean. It does have a covered roof, but the sides are open so you have a great view (perfect for picture taking) of the open range. 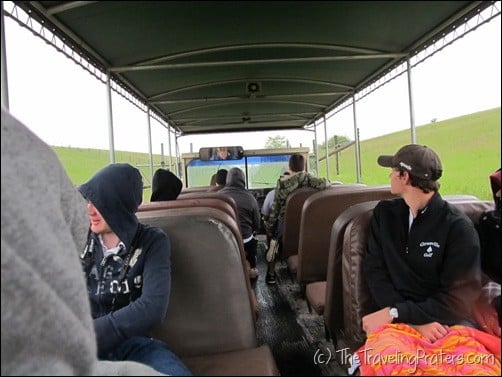 Of course, open sides also mean that you need to dress appropriately. If it’s chilly, pack a jacket or sweatshirt and when it’s raining, you are going to get wet, so you need to be prepared. In addition to your raincoat or poncho, it’d also be handy if you had a towel to wipe down the seats before sitting down. I hadn’t thought that far ahead, but I’ll certainly be better prepared next time. 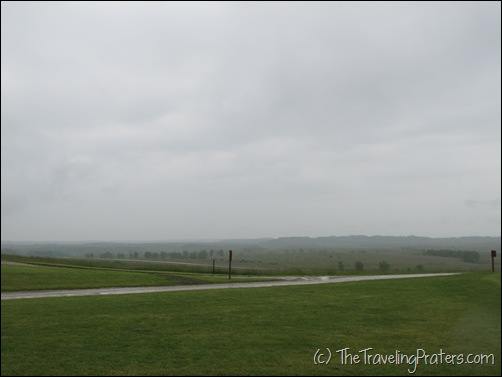 Looking at it now, it’s hard to imagine that this land was once ugly, and barren as a result from years of strip mining.  With over 9,100 acres donated by American Electric Power, this reclaimed land is now home to endangered species of animals from around the world, making The Wilds the largest wildlife conservation center in North America. 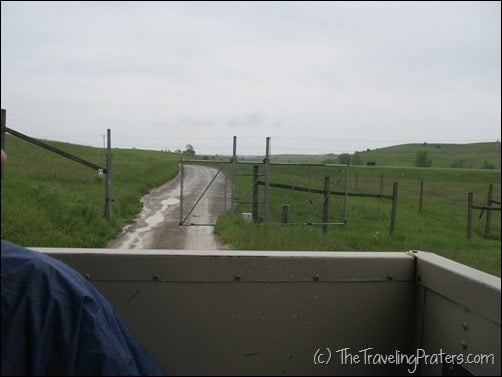 To access the pastures, the bus must first go through one gate and close the gate (remote controlled) behind the vehicle before entering a second gate which ensures that no animals escape. The area between these two gates is known as the perimeter and totals nearly 1,000 acres. You will find white-tailed deer “from the outside” in the perimeter and on occasion the bison will pasture in the perimeter.

Entering the pasture, feels as though you’re setting off on a grand adventure in another country. Looking around it’s hard to believe that you’re even in Ohio. 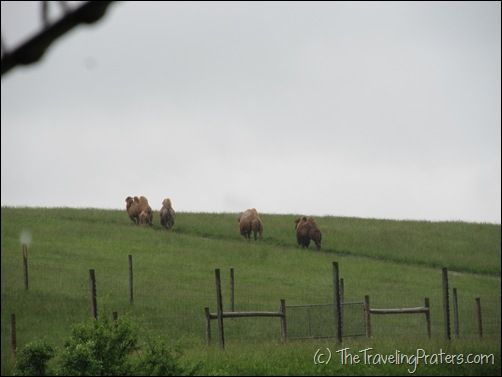 We glimpsed Bactrian camels and the tour bus pulled alongside, stopping, so we could get some great shots of these magnificent creatures. 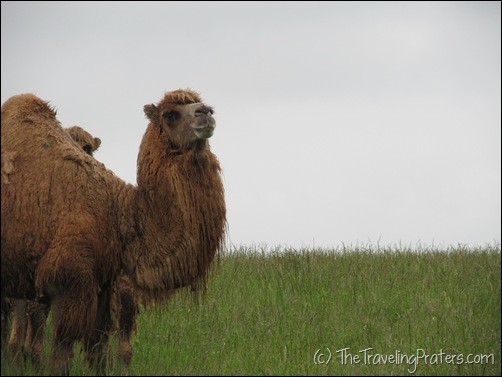 Did you know there are less than 1,000 left in the wild? That’s why the conservation and breeding efforts they are undertaking at The Wilds is so important. Scientists from The Wilds have even been working in Mongolia, surveying the remaining wild camels. 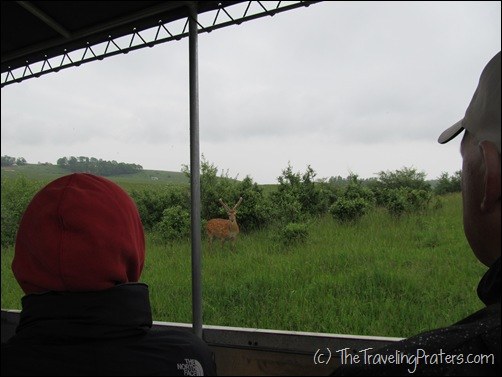 Our tour guide was Dixie and she did a great job navigating around most of the puddles while introducing us to the wonders of The Wilds. On occasion we did happen to hit a bump or two and even managed to hit one rather unexpectedly that lifted our rumps right out of the seat- something to consider if you have back problems. 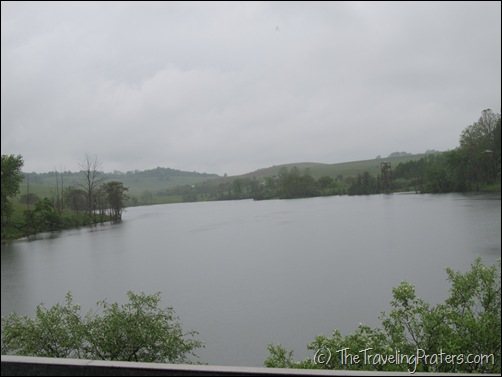 There are 31 species of endangered animals at The Wilds and we saw many of them on our 2- 2 1/2 hour drive thru tour. 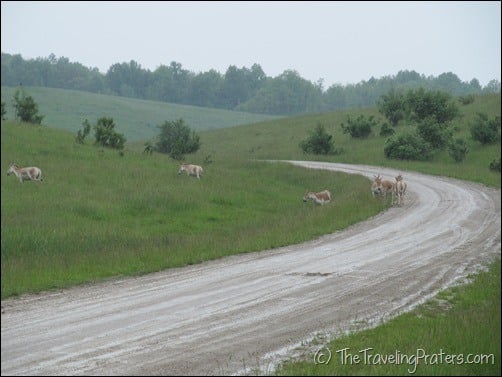 There may be less than 700 Persian Onager in wild but at The Wilds, one of three places within the US that breeds them, they seem to roam abundantly. 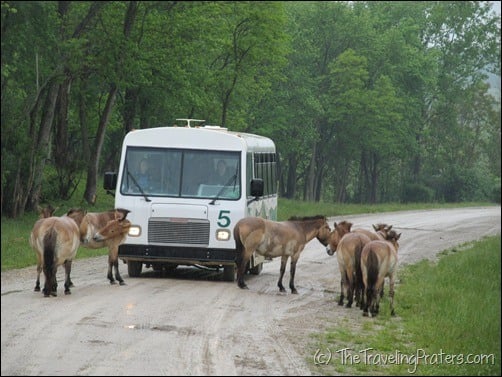 These Przewalski’s Wild Horses were the first animal to be introduced to The Wilds. The horses were actually extinct in the wild but thanks to conservation and breeding programs, 400 have been reintroduced in to Mongolia and China. As you can see from this picture, these creatures certainly aren’t afraid of the tour buses. I wonder how long this bus was delayed before the horses finally moved out of its path and allowed it to pass.

There are two stops along the route, the Lake Trail and the Mid-Sized Carnivore Conservation Center. Each stop adds about a half hour to your tour.  The lake stop allows you to get off the bus, stretch your legs and view Trumpeter Swan, catfish and wildflowers. Since it was raining, our group elected not to stop but pressed on to view the carnivores. 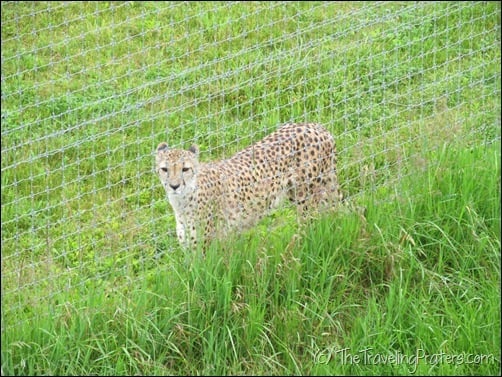 The mid-size carnivore post is located about midway on the tour (depending on the location of the animals), has rest rooms, a snack bar and a short walking trail where you can see African Wild Dogs and Cheetahs. 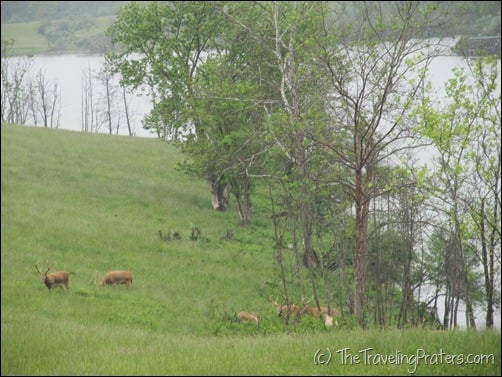 Leaving the carnivore outpost and making our way back towards the visitor center, we were surprised to see an ostrich lay an egg (sorry, I missed that shot). 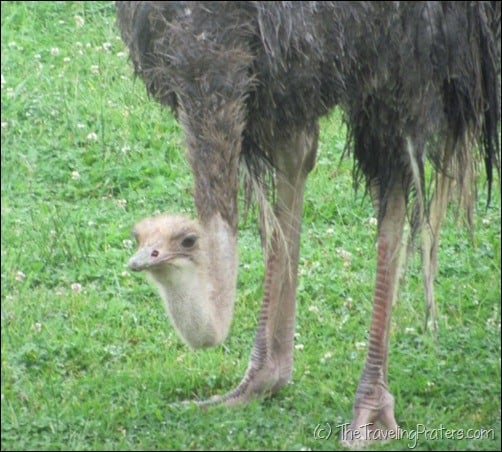 We saw dozens of Sichuan Takin- which we were told aren’t always so easy to find. It appears the answer to viewing lots of Takin’s is to visit when it is cold and rainy. We saw a few takin babies which was a special treat. 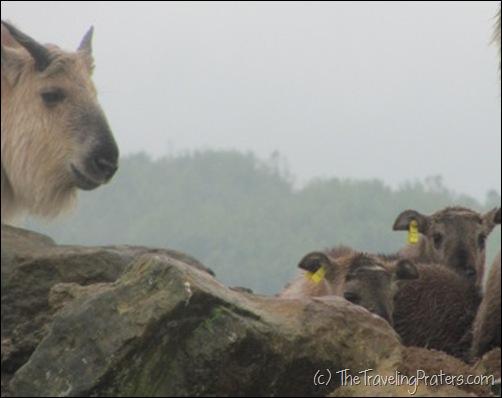 The baby Southern White Rhinos are adorable. And interestingly, The Wilds can boast that four generations of rhinos have born on their grounds. 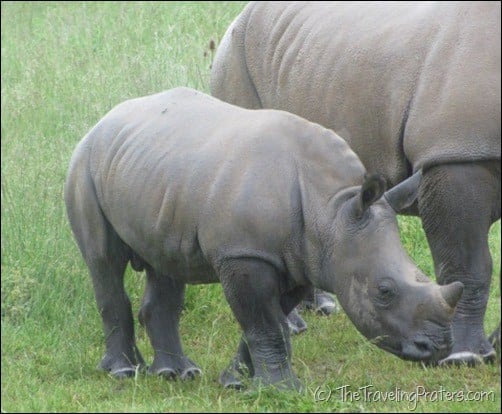 Our tour guide was certain that it would be too cold for the giraffe to come out, they like weather in the 70’s. I was pleasantly surprised to see them out and excited to see baby Masai giraffe! 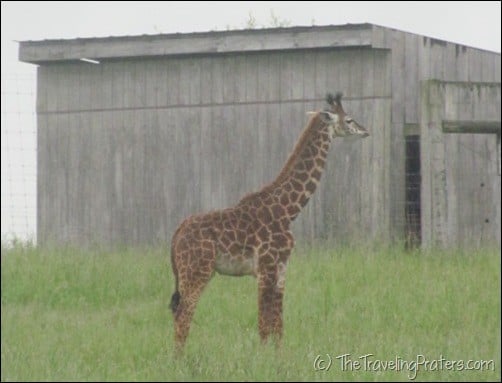 I’d been told that the best time to visit The Wilds would be in cooler, rainy weather. Though we certainly saw a lot of creatures, including the Common Elands, Fringe-Eared Oryx, Sable Antelope, Scimitar-Horned Oryx, Indochina Sika Deer, Pere David’s Deer, the Greater One-Horned Asian Rhino, American Bison, and Grevy’s Zebra, I’ve never been disappointed on a trip to The Wilds. I’ve found there is always something to see! I did learn that if it’s raining, you’ll get the best view by far on the open air bus, as the windows on the closed bus tend to fog.

Your tour at The Wilds will wrap up with a stop at the gift shop where you can browse for as long as you like before hopping on a shuttle to take you back up or down the hill to your awaiting car. In nice weather, we may have walked across the street to the butterfly habitat but we were eager to drive home and get out of our wet clothes.

Because we love The Wilds, we bought an annual pass so we can go again and again. After all, my son may never forgive us if we don’t fit in that zipline tour and my husband is thinking that he and I need to have a romantic getaway, renting one of the 4 and 5 star Nomad Ridge yurts that overlook the property. I certainly won’t argue with that! 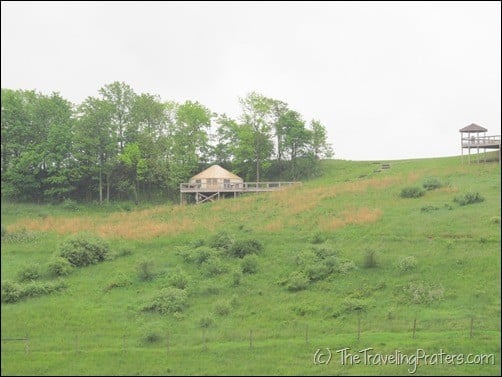 The mission of the Wilds is to advance conservation through science, education and personal experience and they do a great job of educating you, making The Wilds a perfect family field trip- and don’t forget homeschool field trip!

You’ll find The Wilds at 14000 International Road, Cumberland, Ohio 43732, but it’s best to follow the online driving directions and not trust your GPS this time.

The Wilds is open 7 days a week during June, July, and August; weekends in May, September and October, as well as Memorial Day and Labor Day.

The Safari Transport Pass departs every 10 to 20 minutes.

The Open- Air Safari (the one my family enjoyed)

TIP: The membership we purchased was only $125, saving us $25 off what it would have cost us for tickets. That will allow us free tours for a year, an opportunity to take two guests with our pass, a discount on the Nomad Ridge rental, ability to rent the lodge and discount on other safari options like the Wildside Tour, Wild Animal Encounter and Sunset Safari Tour.

The Wilds also offers Fishing Safaris on the lakes at The Wilds, Horseback Safari and as previously mentioned, Wild Zipline Safaris.

This week I’m joining R We There Yet, Mom? for Friday Daydreamin’ and Fantastic Foto Fieldtrips hosted by the Homeschool Post.