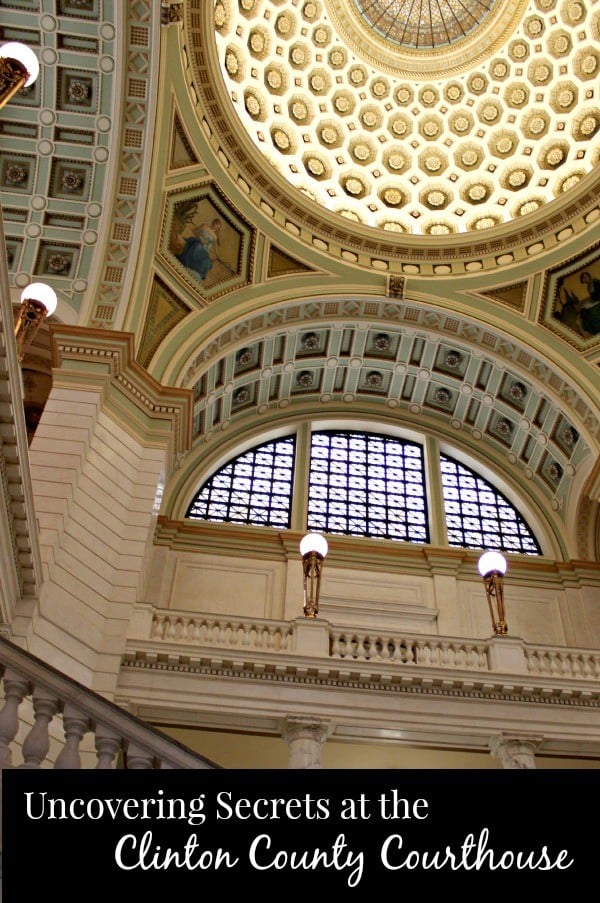 It’s hard to miss the Clinton County Courthouse located at 46 South Street in Downtown Wilmington, Ohio. The gorgeous Second Renaissance Revival structure takes up an entire city block. The courthouse was modeled after the US Capital before the Civil War additions. 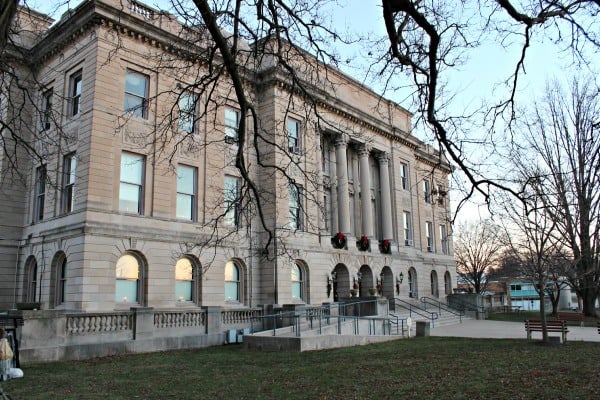 The building caught my eye in January when my husband and I visited Wilmington for a romantic escape. Unfortunately, we had arrived late in the day and over the weekend so the building was closed for tours.

I was excited to visit again a few weeks ago when I learned the interior of the courthouse is just as gorgeous as the exterior.

A Peek inside the Clinton County Courthouse 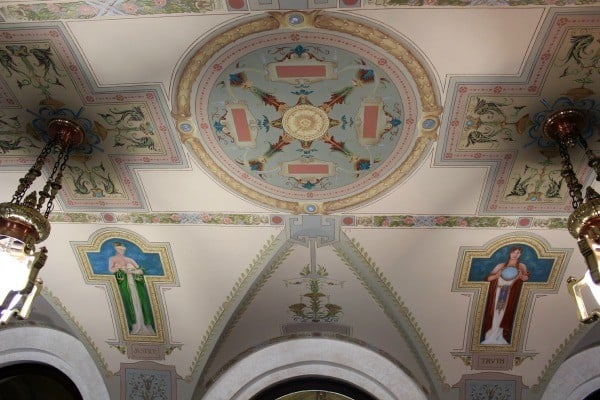 Built in 1918, the Clinton County Courthouse has undergone extensive restoration which began in 1998 and took two and a half years to complete. No inch of the courthouse was left untouched and in the process, a few secrets were uncovered.

You’ll find the first surprise as soon as you enter the courthouse via the South Street entrance. The gorgeous mural on the ceiling was covered over by many layers of paint but when the ceiling was damaged by a water leak, and repairs were ordered, the mural was discovered and restored to its original condition. 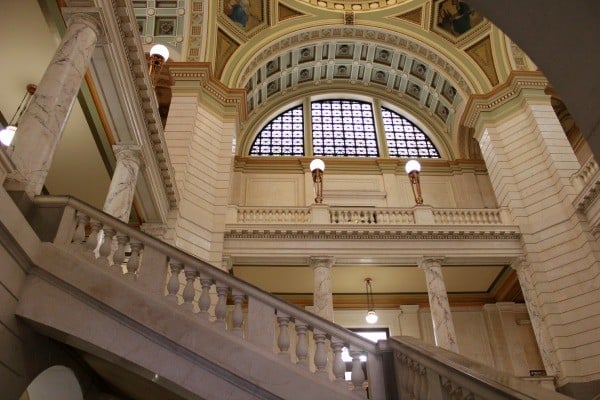 The walls of the atrium were finished with an Italian plaster process that resembles marble. The process, called Scagliola, is achieved when raw silk, dipped in color is placed over wet plaster and removed, leaving behind a trace of color. Once dry, the plaster is polished. The original walls were coated with varnish to protect them from damage. Over years of coal heat, they turned a dark yellow. 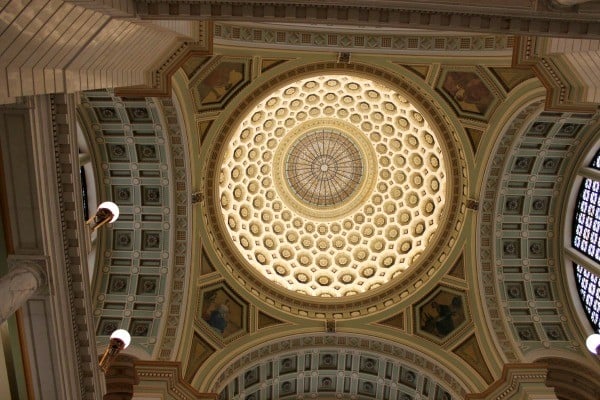 To restore the dome above the atrium, an 85 foot tall scaffolding was erected. Workers cleaned and rewired all the brass lamps. The majority of the restoration process was spent cleaning the 128 rosettes in the dome. During this phase of renovation, it was discovered that the women painted in each corner of the ceiling were painted by different artists. 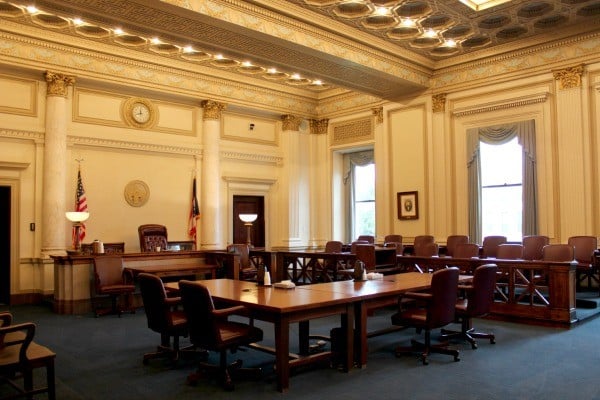 The basement of the courthouse is off limits to visitors, but that’s fine by me. An old dirt floor remains with a tunnel that was used to transport prisoners to the old jail. It’s rumored that the basement is haunted by the ghost of an auditor who hung himself. That’s enough to keep me away.

The Keepers of the Records: Clerk of Courts

I loved viewing the inside of the courthouse, but more than that, I loved hearing about the history. In the Clerk of Courts office, I learned that they have handwritten records from the time the county was formed. 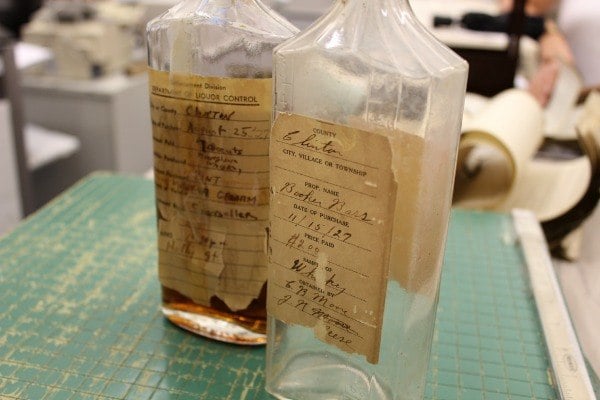 Inside the massive safe that was lifted to the third floor office with a crane, there are several treasures from the past including a baseball from an 1883 ball game and a bottle of whiskey, confiscated from a moonshiner in 1927. The whiskey would have sold for 70 cents during the prohibition. 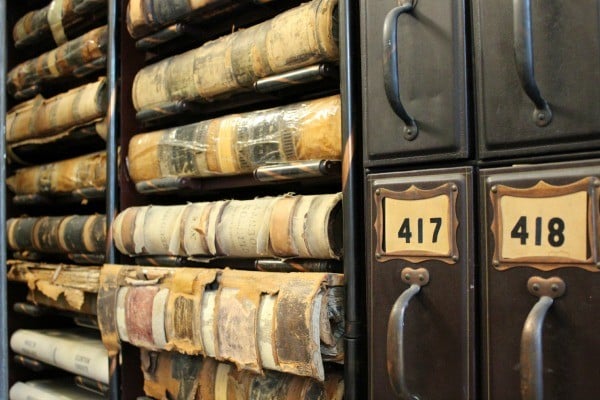 Most interesting would be the story of Cornelius Quick, a horse thief and subject of Clinton County’s first trial. Found guilty, Cornelius was sentenced to 30 lashes in the woods. As he was being transported, he told the guards that he needed to go to the bathroom. They allowed him to go and he took the opportunity to run away, living up to his name. He was never found and never punished.

Visitors are welcome to stop in to the courthouse for a self-guided tour, or you can arrange a free guided tour in advance by calling, 937-382-2103.

Visit the website for the Clinton County Visitors Bureau for more information. 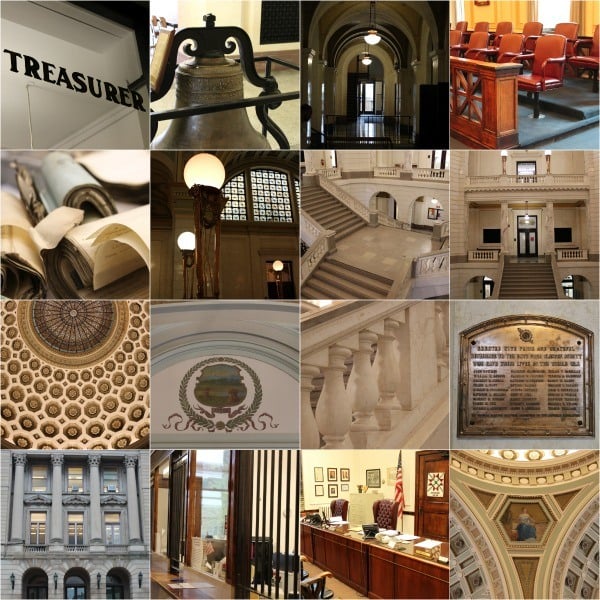 Related Posts:
Why you should get to know your Local CVB
A Visit to Grandpa’s Pottery in Clinton County in Pictures
The Ultimate Bucket List for those who want to Explore Ohio

Thank you to the Clinton County Visitors Bureau for hosting my visit to the area so I could share my experience.

There is a shooting range in the basement. it is a wonderful old building.

I had no idea! That's pretty cool. Is it still in use?

My Dad was Sheriff in the 60's and 70's. I've through that tunnel hundreds of times. I grew up playing in the courthouse!!!

I bet you have some amazing memories of the courthouse, Dona! What a fun way to to grow up.

This place is breathtaking. I love your picture collage at the bottom - what a great way to capture just a bit of what you can find at this amazing courthouse. Seems more like a state capitol building to me!

Great post, Tonya. This is only 45 minutes from my house and I had no idea it was so beautiful inside.

It was so gorgeous, Terri. Definitely worth the trip for you to see it. While you're there, pop in to the Murphy Theater too. It's gorgeous as well. I'll have a post coming on that attraction soon.