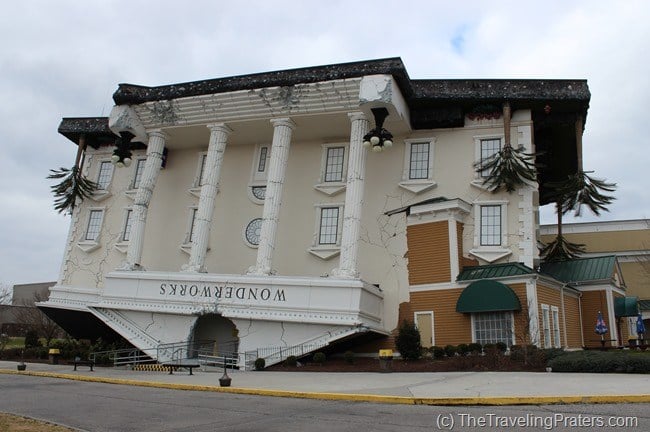 You can’t drive by Wonderworks in Pigeon Forge and not take a second look. The building appears as though it landed upside down in the parking lot, and perhaps, it did.

Legend has it that a team of scientists, led by Mr. Wonder, were conducting a scientific experiment when something went terribly wrong. The laboratory and its inhabitants were sucked up into a vortex that they had created and carried thousands of miles away, landing upside down on a theater in Pigeon Forge. 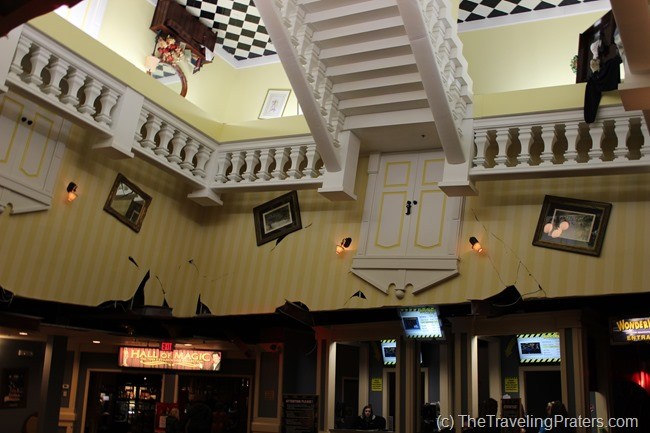 In order to view the exhibits, you must step through the inversion tunnel, and so the adventure begins.

This 60,000 square foot facility boasts over 100 interactive, state of the art exhibits, creating an ‘amusement park for the mind’ and fun for the entire family.  Take a walk with my family as we explore all that this museum has to offer. 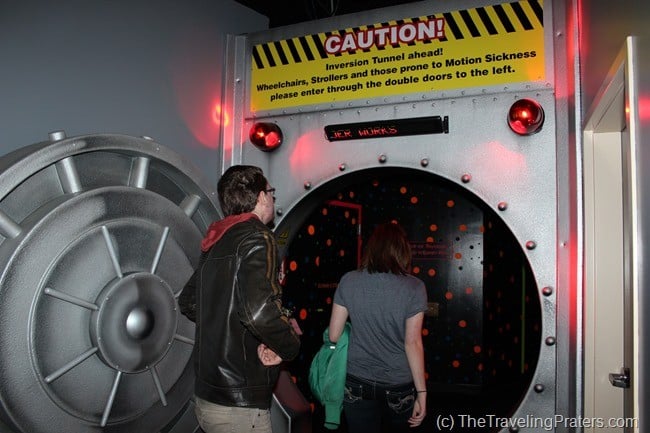 I have to admit, I was a wee bit dizzy after making my way through the short tunnel but my teens recovered quickly and had already scattered, off to explore whatever caught their eye. My daughter jumped right on the Pulley Seat, and my sons had discovered how to harness the power of electricity. 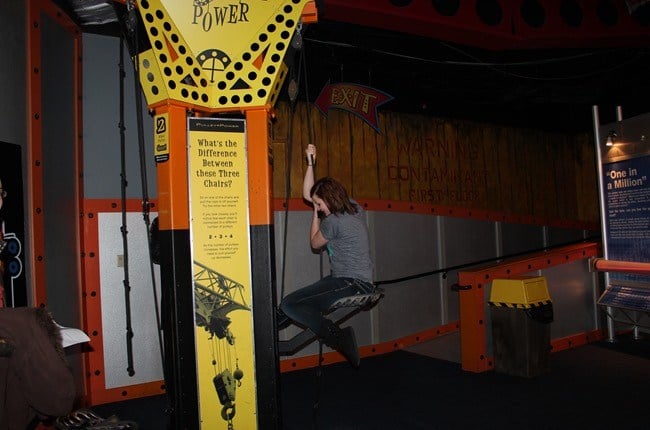 While some guests were shook up in the Quake Cafe that simulates a 6.0 earthquake on the Richter Scale, my daughter an I withstood a hurricane with winds of 65 miles per hour in the Hurricane Hole.

My daughter and I were both thankful that we hadn’t spent a great deal of time on our hair that morning! 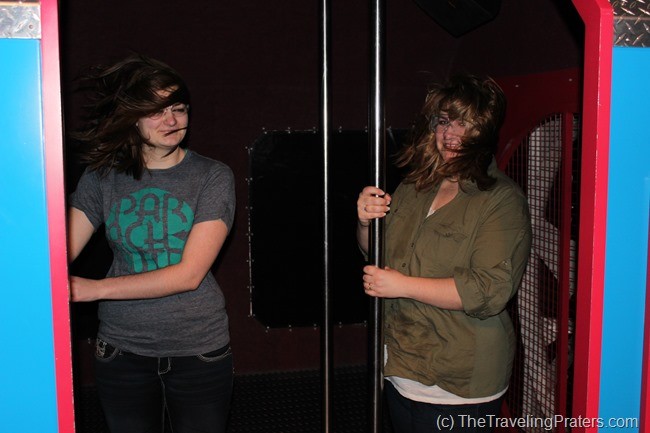 The Extreme 360 Bikes weren’t quite open yet when we passed through the Wonder Park, but the entire family enjoyed watching the climbers on the Rock Wall, tinkering with the Robotic Arms, learning how fast we could throw a major league baseball (I won’t embarrass myself by revealing my score), and the exhibits the males in our family enjoyed most, the Grip and Strength Challenge. I think they could have stayed there all day trying to “beat” each other, but they attracted the attention of other visitors, who thought the exhibit looked like fun, too. 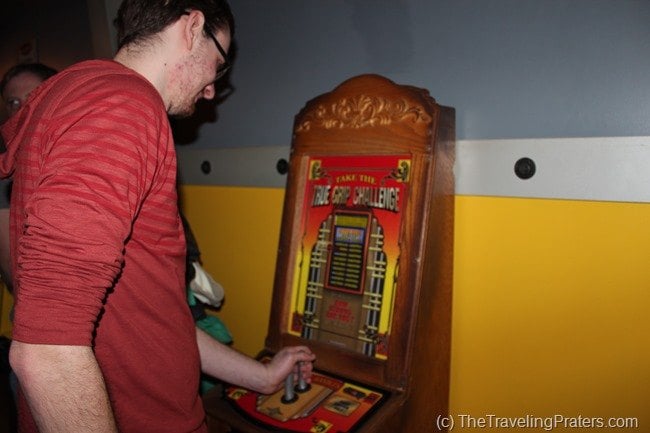 As you enter Space Zone, you’ll see the World’s Largest Indoor Ropes Challenge Course. Not for the faint of heart, this 50 foot tall, 4 story course contains over 50 obstacles which include a tire traverse, suspension bridge and swinging beam.

I’d like to tell you that I was a brave soul that conquered my fear of heights and successfully completed the course. That may have been the case, had I not looked down from the starting platform. With that glance, I began sweating and shaking so terribly, I chose to retreat to have my safety harnesses removed. 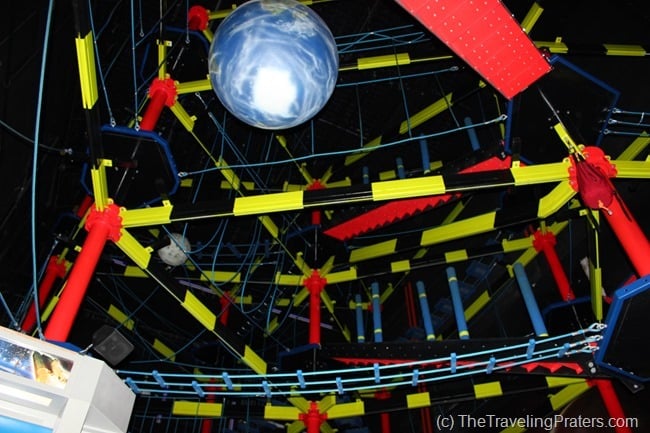 You can also test your space knowledge and see if you have what it takes to land the Space Shuttle Discovery in the Space Landers.

The Bed of Nails was a huge hit in my family. We all had to lie down to see if it truly didn’t hurt. It’s amazing, but we really didn’t feel a thing. 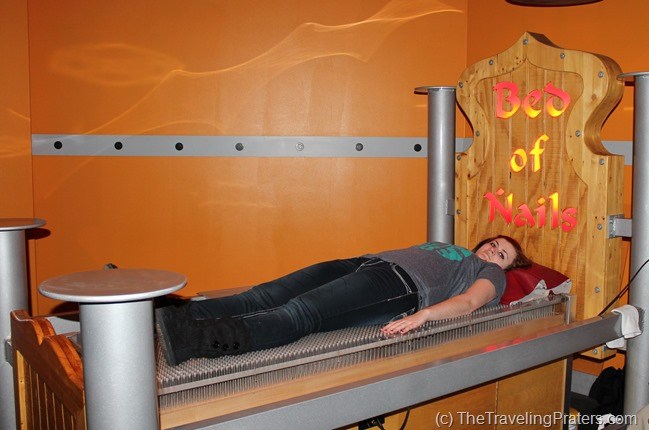 Mind Ball was another hit for my family. The goal of the game is to move a ball across the table using only your brain waves. The most relaxed contender will win. I was nearly declared champion until my husband decided to oppose me, and it was all downhill for me from there. I guess some of the exhibits at WonderWorks just really brought out the competitive side in us. 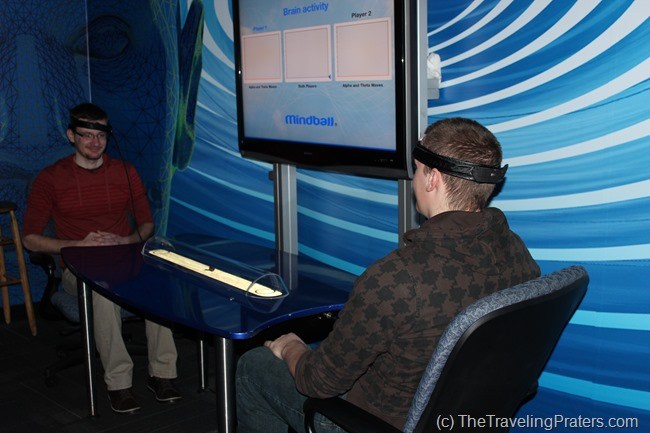 Two of my teens were brave enough to brave the Wonder Coasters. These virtual reality roller coasters that players design will really send you for a loop. 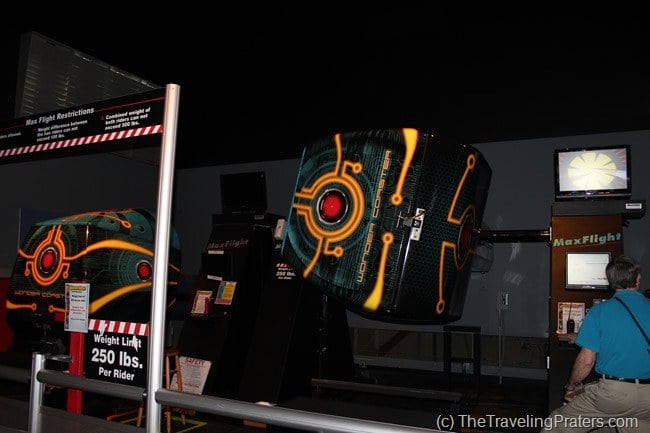 Young and old will enjoy creating bubbles bigger than you are in the Bubble Lab! 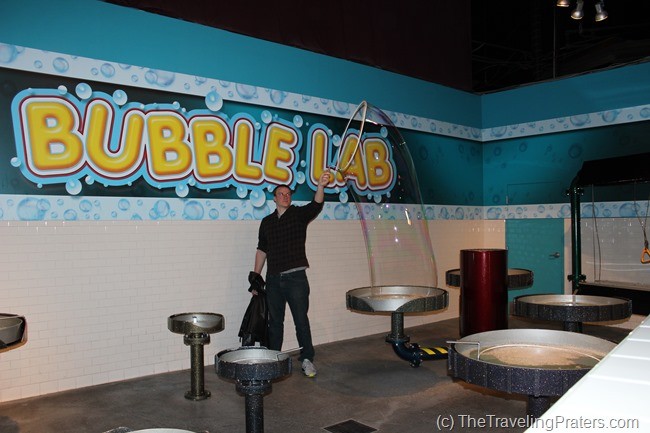 We were almost on our way up the stairs to the second floor when we discovered a brand new exhibit and the highlight of our day, an Army training simulator that thrusts participants into a war zone in an open Hummer. In Technology Defending Freedom, your mission is to recognize and destroy targets as your vehicle maneuvers through dangerous territory. Because of the violence depicted, this simulator is for those aged 13 and up. 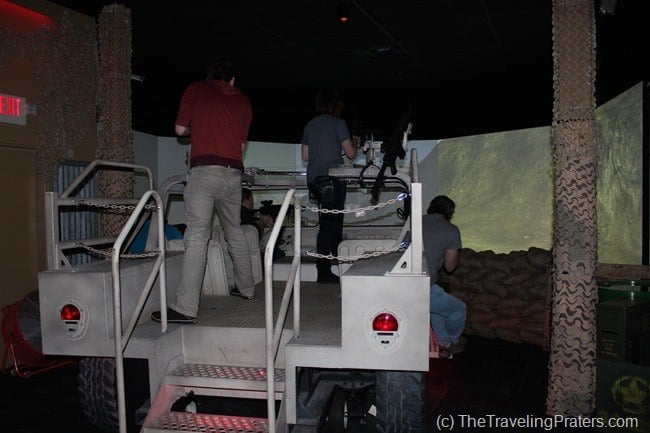 The second floor leads to what is perhaps my favorite part of WonderWorks, the Illusion Galleries. 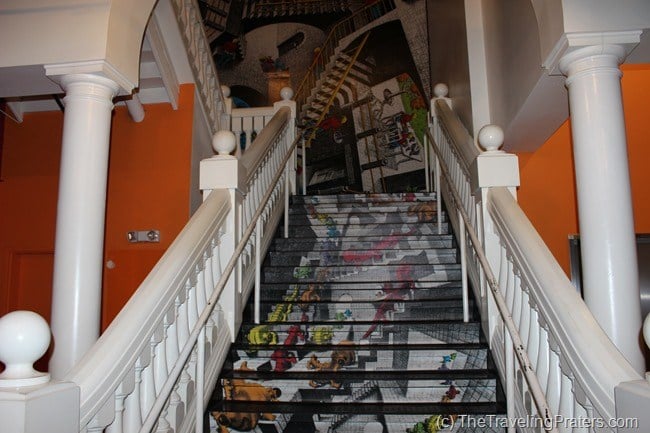 I love the Head Turners that allow you to see a face, whether you have the picture turned right side up or upside down. 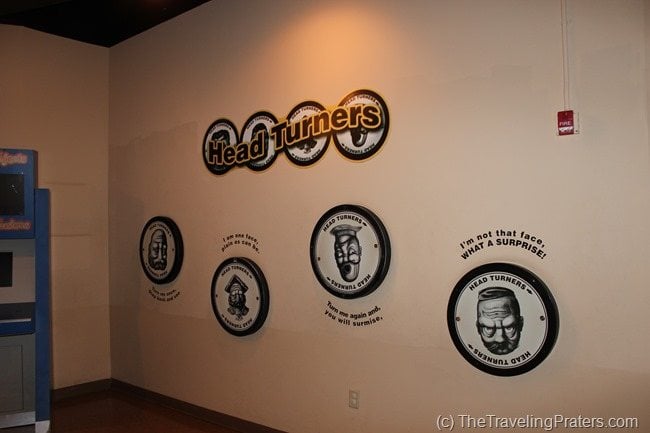 My kids loved the Wire Art that looked like a blob of wire until a light shone on the piece and transformed it into an amazing picture. 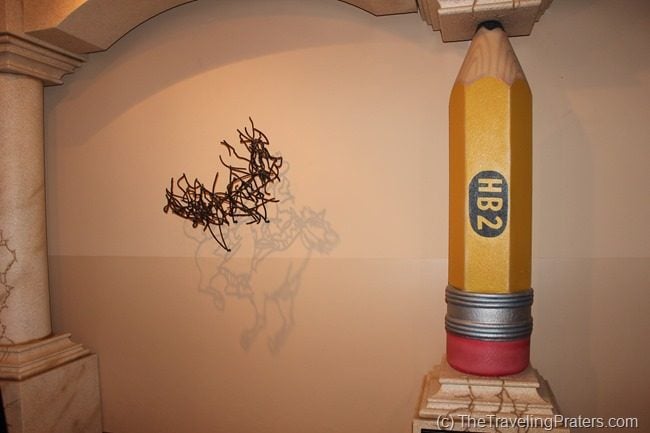 The illusions were all amazing, but there was one that made us pause and take a closer look – the Illusion Bathroom. The bathroom has a clear glass window and door that everyone can see through – you can look directly into the bathroom. The glass changes to privacy glass when a brave soul opens the door and enters the bathroom. My daughter thought she’d try it, but quickly changed her  mind. 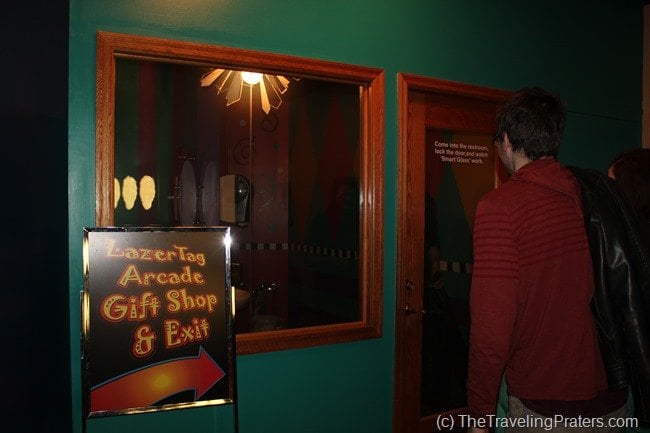 The galleries exit into the arcade where guests can play Lazer Tag (for an additional fee) and compete against opponents in a blacklight maze, grab a bite to eat or play a game or two in the arcade. 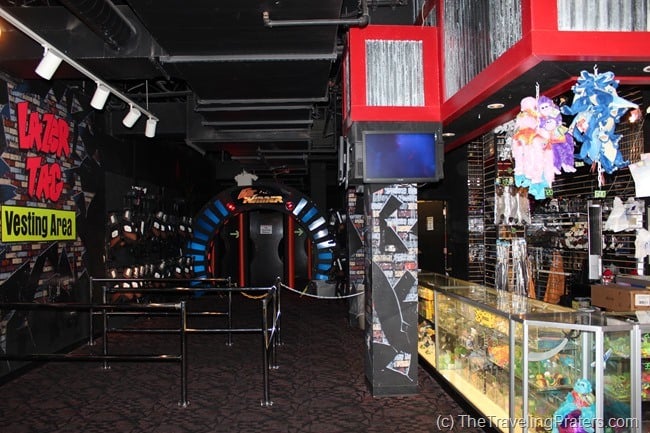 I’ve shown you what appealed to my family with teens in this post, but with over 100 exhibits, WonderWorks has attractions that kids of all ages will enjoy!

You could easily spend 3-4 hours playing, exploring and learning with your family at WonderWorks in Pigeon Forge but if you’re not eager to end your day, you could purchase a combo ticket to allow you to see Wonders of Magic evening show with Terry Evanswood, or purchase a ticket to the Wonders of Flight for a spectacular aerial view of the Smokies.

Disclosure: I received comped tickets to WonderWorks to facilitate my review. All opinions are my own. I was not asked to share a particular viewpoint.

My kids love this place! We could spend all day here.

The whole thing but my kids would probably really like the bubbles!

Love Wonderworks! My boys have been asking when we could go again (it has been a couple of years!)

With a 5 year old ~ we would love the Bubble Lab. As a military man, my husband would enjoy Technology Defending Freedom.

Although we love going to the Smokies, I don't think we'll be going there this year. Otherwise, I'd be hot on this one! I will let some friends know about the contest though!

I'd love to go back to the Smokies again this year and we just got home! Addictive, isn't it? I'm disappointed that we weren't able to hike on our last trip. Just not enough time to fit everything in. Thanks for spreading the word about the giveaway. :)