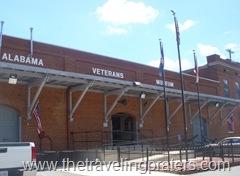 It was suggested that the kids and I visit the Alabama Veteran’s Museum & Archives some time ago and to be honest, I drug my feet because I just really didn’t think that it would be very enjoyable. I can’t tell you how wrong I was! From the moment we stepped inside, and I saw my boys’ eyes light up, 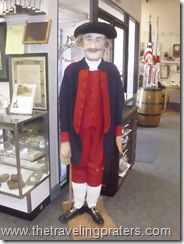 I knew we were in for a special treat.

The Alabama Veteran’s Museum & Archives is housed in a 100-year-old building along the railroad tracks that was originally used for the transport of cotton and other commodities. Though the tracks are still in use today, the building hasn’t been used as a depot for many years. It  now houses uniforms, artifacts, and memorabilia from each of the wars in United States history,  with the main emphasis on the men and women who have served from the state of Alabama.

Many of the exhibits displayed books or pamphlets that offer more in-depth information on the display for those that want to dig further. We didn’t really have time to delve in deeper on this visit, but my boys are looking forward to a return trip so they can read through the information on Sybil Ludington, the female Paul Revere, as well as WWI and WWII Trench Art.   My son remarked that the art created from artillery shells resembled Medieval Art.

With a son that wants to be a future soldier, and major 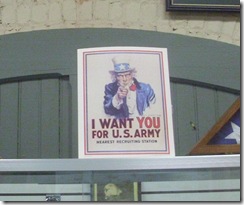 history buffs in our household, we’ve spent time in many museums that house war memorabilia but we always learn something new.  I hadn’t ever noticed that the Uncle Sam figure in the famous recruiting poster seemed to be looking and pointing directly at you. No matter where you seemed to be standing.  Personally, I also had not realized that thousands of American soldiers who lost their lives during WWI and WWII are buried overseas in military cemeteries in places such as Sicily, North Africa, Luxembourg City, Florence and Normandy. I had no idea.

I also didn’t know that WWII pilots had silk maps. Of course, a paper map wouldn’t have held up very well if th 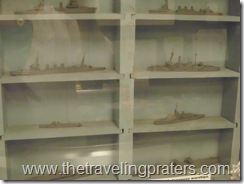 ey were shot down over a body of water. The boys were surprised to learn that dog tags have not always been rectangular. During WWI there were round dog tags that were about the size of a silver dollar. We saw a miniature kit of military ships that the Navy would use to train sailors so they could recognize friendly and enemy ships on the horizon so they wouldn’t mistakenly shoot at their allies.

I think we toured just about every inch of the museum from the gift shop to the bathrooms. Yes, we even went into the bathrooms to see the artwork th

at a local artist had painted on the walls.  The story goes that a sailor got off the ship,  grabbed  the first girl he saw and kissed her which resulted in a reporter snapping this well known picture. The subjects have never been identified.

The museum currently has over 2,000 pieces of memorabilia on display, but because they accept donations, the displays are always changing. It’s likely that it will not look the same on our next visit. The museum offers a library with books, DVD’s and VHS tapes on the upper floor which is open to the public and is an ideal resource for those working on reports or interested in military history. They also offer a Coffee Call breakfast the 1st Saturday of every month where you can meet and thank veteran’s who have fought for our freedom. The museum is free but donations are welcome. They also sell flags and commemorative bricks that you can honor a loved one with while supporting the museum.

Thank you for dropping by my blog.I've added our excursion to your meme ... which is a GREAT meme! I'm looking forward to reading all your posts for a quick tour. :)

I found you via Allied Moms :)

Have a Great Weekend!

Tonya, I didn't receive our travelers if you mailed them last week. We are out of our house here, and have less than a week on the island. If you didn't mail them, just hold on to them til I can get you a mailing address in VA. Also our e-mail has changed, so the best way to reach me is to leave a comment on the blog.

Sorry - I need to re-write the post - all of the pictures posted wonkey. I think I deleted an alignment code somewhere. . . . . I'll repost in a a bit. . . . it will be a different blog post title, so if you have access, feel free to delete the above linky. :)

Sorry - I need to re-write the post - all of the pictures posted wonkey. I think I deleted an alignment code somewhere. . . . . I'll repost in a a bit. . . . it will be a different blog post title, so if you have access, feel free to delete the above linky. :)