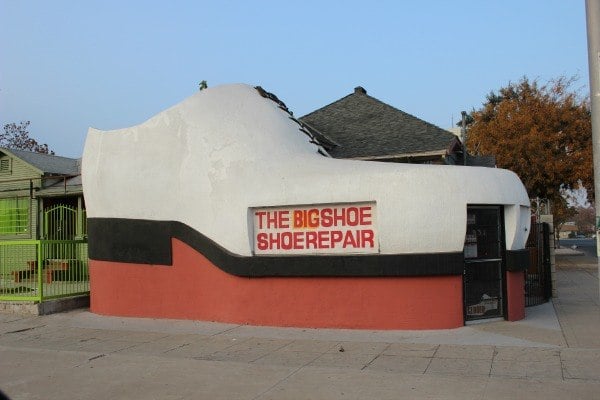 You may not believe me, but I WAS not looking for a roadside attraction when my family passed by this unique building in Bakersfield, California.

We were on our way through an intersection on our epic California road trip, when I spotted this 25 feet tall, 32 feet long, big shoe repair shop roadside attraction. I don’t think I’ve ever grabbed my camera as quickly as I did when I spotted the shoe. I fumbled with the lens cap, pointed, shot and managed to get one photo. I wanted to get a closer look, but my husband refused to drive around the block.

The grayish building, was built in 1947 by Chester Deschwanden, who worked as what else? A shoe repairman. When he died, his son, Donald who had worked at his father’s side since he was nine, took over the business which he ran for 40 years before his death in 1992.

The building was deserted for more than a decade before it was purchased by a Mexican businessman and restored as a shoe repair business. The building has been featured in several magazines and books that have featured unique buildings. Unique, it is but do you know what makes this building extra special? It’s the only shoe-shaped building in America with shoelaces.

You can see the Big Shoe Repair Shop Roadside Attraction at 931 Chester Ave in Bakersfield, California and don’t be too quick to put your camera away, you’ll find a giant pressure canner or stock pot a few houses down. Unfortunately, I wasn’t able to get a photo of that one and as I already mentioned, my husband didn’t want to turn around.

Have you seen the Big Shoe?

I have seen this building many times, I used to live in Bakersfield as a child would be in 'awe' of this shoe -I have never been in it, but I sure remember it - I was born in 1958 and left Bakersfield when I was 12 and have often thought of this unique building since - never have seen anything like it since - I guess I will never forget it

It's certainly a unique building and hard to miss! Thanks for sharing your memory of the building. :)

Whenever I see an attraction like this, I think of my father-in-law. He was the one person that was always interested in stopping at places like this and always asking questions so he could get the whole story about it.

I think I'm more interested then my teens are but I keep telling myself that one day, they will appreciate all the roadside attractions I drug them too. :)

I love all of these cheesy, corny types of vacation stops. They always make for great photo stories.

How fun is this! My mom would love to check a crazy building out like this one.

Oh gosh, its even funnier about the can shaped one down the road!