The World Famous Route 66 Rocker in Fanning, Missouri may no longer hold the title of the world’s largest rocking chair, but it still makes a fun road trip stop! 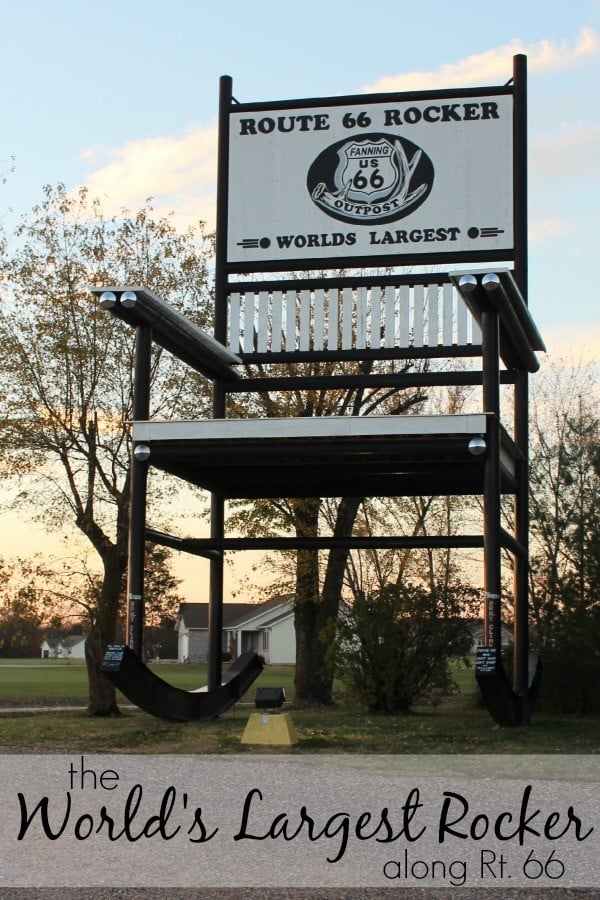 UPDATE: As of August 2015, this is no longer the World’s Largest Rocking Chair. This post was updated on April 3rd, 2018.

I didn’t set out in search of the World’s Largest Rocking Chair but when my family pulled into a gas station near Cuba, Missouri, and saw a sign pointing us to the roadside attraction, I knew we had to stop.

In 2007, Dan Sanazaro and his wife, Carolyn, owned a small complex of businesses, including the Fanning Outpost General Store in the tiny town of Fanning. Missouri. Fanning is located about four miles off the beaten path from Cuba, Missouri. Their other businesses included a feed store, an archery range, and a taxidermy shop. 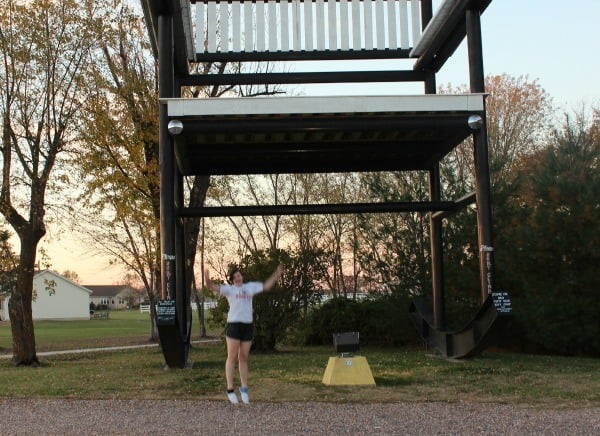 Dan came up with a brilliant marketing idea to cash in on the popularity of Route 66 travelers and draw customers to his store.  He took his inspiration from large rockers he had seen as a kid and the “Big John” rocker in Franklin, Indiana.

The Route 66 Rocker was designed by John Bland, an acquaintance of Sanazaro, who surprisingly had no engineering experience. The chair was fabricated in a local welding shop by Joe Medwick. 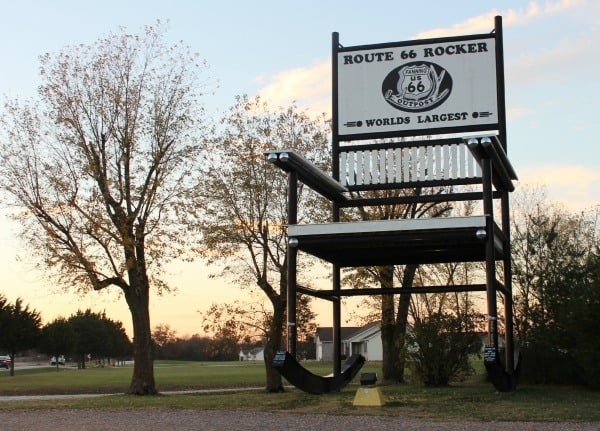 The chair was unveiled on April Fool’s Day, 2008. At 42′ 1″ tall and 20′ 3″ wide, the rocker is certified by Guiness as the “World’s Largest Rocker”. In order for the chair to receive that designation, it had to actually rock. Though the chair did rock when it was constructed, the base is now welded to hold it stationary.

Dubbed “The Route 66 Rocker”, this roadside attraction provides the perfect photo op for the celebration of “Picture on the Rocker Day” which is held the first Saturday in August each year. The Outpost hires a truck to lift people into the chair for their special photos from the seat of the mammoth rocker. 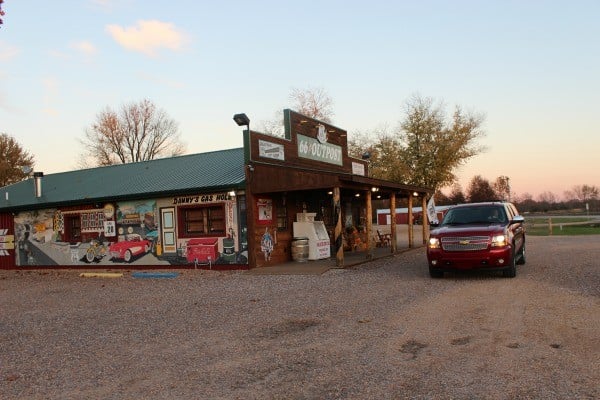 The Sanazaro family fell on hard times and had to close the business in 2015. The property was purchased in 2016 by local businessman, Ryan Thompson, who also owns Route 66 Mercantile in nearby Cuba, Missouri.

The Fanning 66 Outpost and the Rocker still remain, but they have undergone extensive changes since reopening in August 2017. The Rocker is still in its original place, but parts of the Rocker had seen better days and were in a state of disrepair. The Rocker has now been refurbished and has gotten a shiny new coat of paint. This time around, it’s sporting a bold orange and black color scheme. 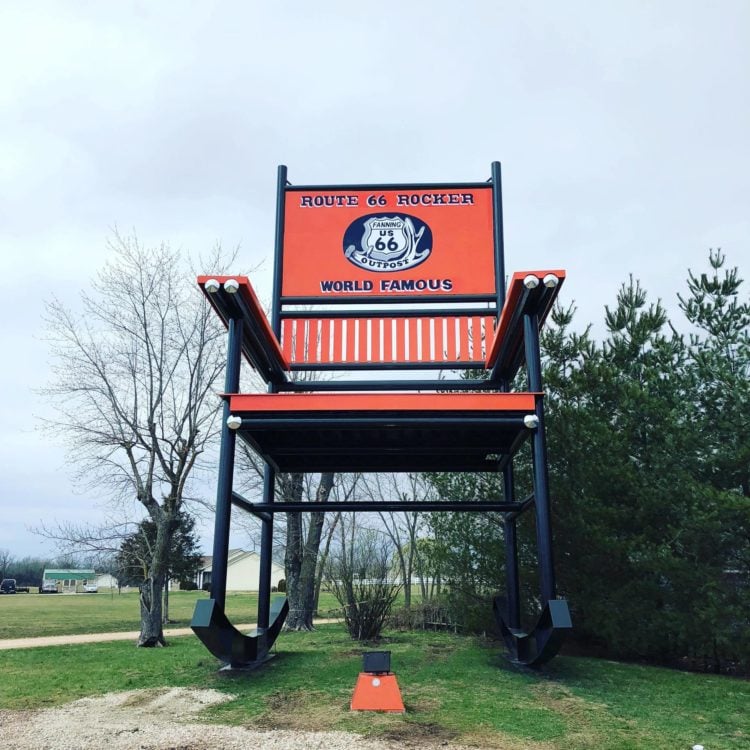 Photo Provided by the Fanning 66 Outpost

The Outpost has undergone its fair share of changes as well. It still operates as a feed store, with food and treats for your four-legged family, but they have turned the archery into a kitchen where homemade fudge and gourmet popcorn are now made. The cooler was expanded to make way for over 250 different varieties of glass bottle sodas. Soda aficionados will tell you that to get the truest flavor, your favorite fizzy drink should come from a glass bottle.

This 10,000 square-foot building is filled with a large selection of foods and drinks, as well as a variety of Missouri made products, and Route 66 memorabilia you might not find in other places. Visitors from over 30 countries have made their way to the Outpost and Rocker. The gourmet popcorn and fudge seem to be a real hit. The Outpost rotates the popcorn flavors from its selection of 300 flavors, and ships tins of popcorn all over the world. The fudge comes in a variety of 40 flavors, rotated on a regular basis.

If you’re in need of a break from your Route 66 journey and happen to be in the area, don’t miss this attraction. The Outpost prides itself on being a family-friendly attraction, and their goal is to make it an experience, not just a kitschy stop over. And did I mention how clean the bathrooms are? Never underestimate the power of a clean restroom!

I haven’t convinced my husband that August would be a good time for another road trip, but I admit that a drive through Missouri that coincides with this popular day has crossed my mind on more than one occasion.

Been here and loved it. Miss seeing the place. one day I might got back there and venture again.

Wow! That is enormous! I love these cool and fun roadside attractions.

Wow, that is pretty awesome! I just wouldn't want to sit in it. ;)

I think it would make a great photo, but I'd probably be so frightened I'd vomit. Not good!

I'm sure I'd want to get my picture taken in that chair if we were anywhere near it on the day they do that too! I'm actually not a big one for Road Trips, I much prefer to fly, but then you miss awesomely cool stuff like this when you're 35,000 feet in the air, so I guess there's something to be said for traveling by road!

If my family is heading somewhere we've never been, I prefer to drive. If it's a trip we've taken over and over, than flying is nice.

Wow, that is quite a large chair!