Just so you know, my trip was hosted as part of a promotional blogger tour of Branson, Missouri, through the US Family Guide so I could discover all the fun things to do in Branson. All opinions are my own. 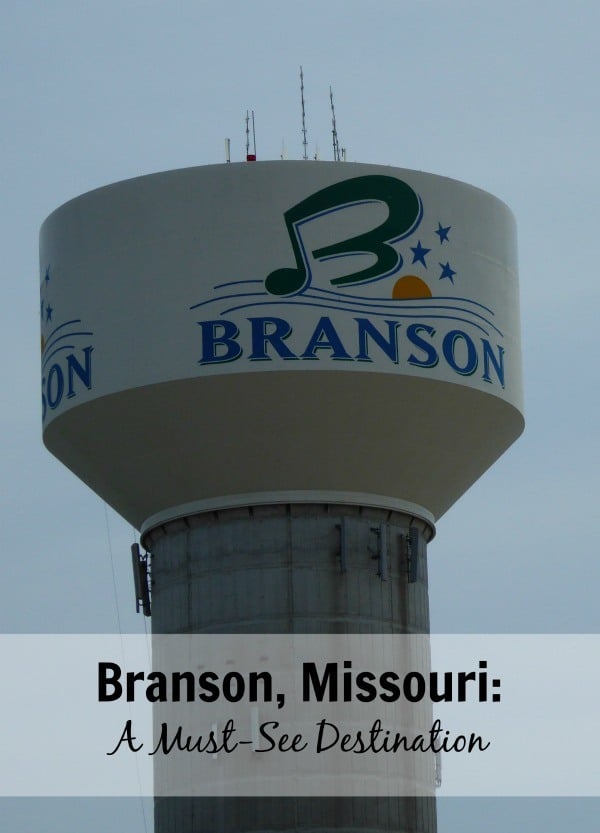 In the past, Branson, Missouri, earned a reputation as a mecca for silver-haired travelers, but did you know that it was also voted in the Top 25 Travelers’ Choice Awards of 2014 by TripAdvisor? After visiting this city in the Ozarks, I can assure you that Branson offers something for everyone and that certainly includes families of all ages.

I was invited to visit Branson with my family, but I’ve learned that it gets tough to mesh everyone’s schedules once the teens start to work. The kids weren’t willing (or able) to get off work so my husband and I set off on a road trip to Missouri to see what Branson was all about. 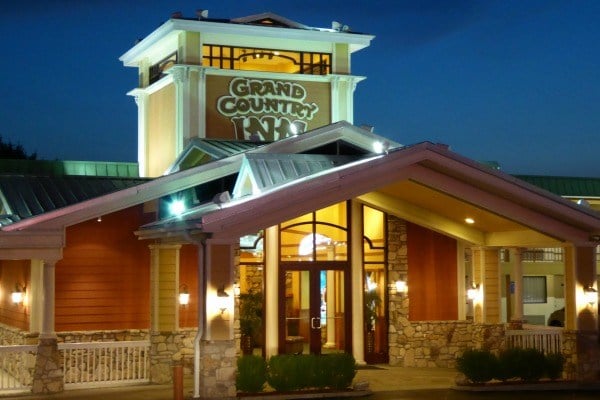 Fun Things to do in Branson

Our stay began at the Grand Country Inn. Perfect for families, this hotel offers much more than lodging. I’d wager a guess and say that if my husband and I visited Branson when our kids were younger, we could have stayed at this resort, probably not ventured off the property and our kids would have had a fantastic time.

The Complex at the Grand Country Inn

The complex at the Grand Country Inn consists of a couple of buildings for lodging, several pools, an indoor water park, restaurants, a candy shop, miniature golf, laser tag, go-karts, and shows. I admit that my husband and I didn’t spend much time exploring. By the time we checked in, we were exhausted after our 12+ hour drive. All I could think of was how wonderful a hot bath would feel before we headed off to see the attraction I was most looking forward to in the Live Music City, the Showboat Branson Belle.

You can read reviews of the Grand Country Resort on TripAdvisor (affiliate link) to learn if it’s the right property for your family. 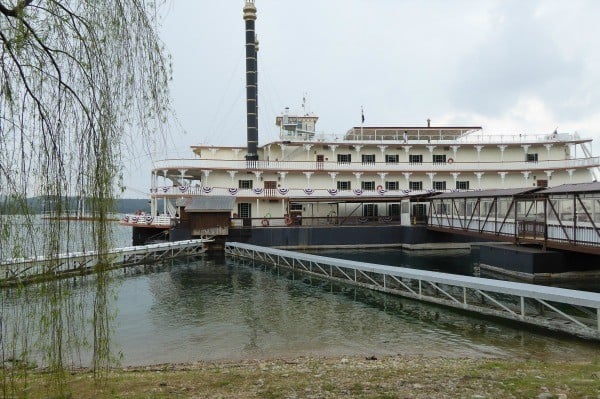 The Showboat Branson Belle claims to be America’s Most Entertaining Dinner Cruise and while I don’t have any experience to compare it to, I’d say it’s something to see.  The emcee/comedian/musician, Christopher James, was hilarious, and my husband and I found ourselves laughing through our 3-course dinner. When we finished eating, we took a stroll along the deck but quickly realized that ear infections and boat travel don’t mix well so we returned to our seats and waited for the show to go on.

As the name suggests, the show, Made in America, was very patriotic.  It made me think of my young Airman who was in boot camp and as a result, I may have gotten a bit emotional during some parts of the show. I loved the performance from The Showmen, and violinist Janice Martin actually played her violin while suspended in air, upside down. If that isn’t entertaining, well, I just don’t know what is.

This year they are adding a new variety show that includes a live band, dancers, and singers performing songs from the 70s through today’s hits. Comedy and magic round out this fantastic 2-hour cruise that’s sure to have something for everyone in your group. 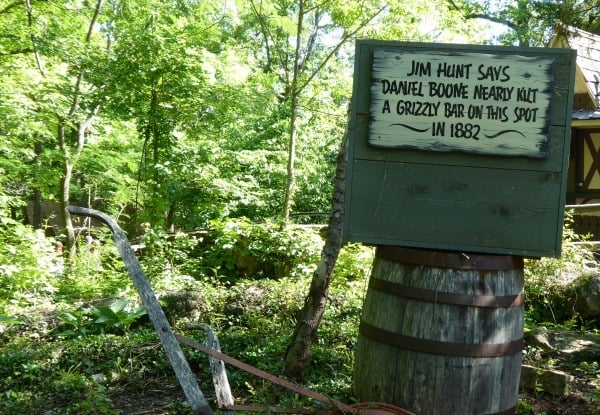 The next morning, we set off to explore the site that started it all, Silver Dollar City. This 1880s themed amusement park had humble beginnings. It started simply and literally as a hole in the ground. That hole was called “Marble Cave” and as word of the cave spread, folks would travel from miles around to lower themselves into the ground to take a look around. As popularity grew, other attractions began to pop up around the cave which is now known as Silver Dollar City.Today, tours of Marvel Cave, as it’s now called, are still offered and included in your admission to the theme park.

You’ll find thrilling rides, shows, and shopping for everyone in this family-friendly theme park. Artisans work to preserve the heritage of the Ozarks as they demonstrate their crafts at shops scattered around the park. Don’t forget to pick up some of their handiwork at one of the many shops to take home as a souvenir.

You might want to wait to eat if you’re planning on riding one of the park’s roller coasters. Silver Dollar City is planning something special this year. All you roller coaster aficionados mark your calendars and get your tickets for the Time Traveler! Hang on, it’s gonna be a bumpy ride! The Time Traveler is the steepest, tallest and fastest complete-circuit spinning coaster in the WORLD! You’ll also find seven different shows throughout the year. We visited during the Star Spangled Summer event when the park was decked out in red, white and blue. There’s no shortage of things to do in the park.  My husband and I explored for several hours and we didn’t even cover half of the 100 acres. 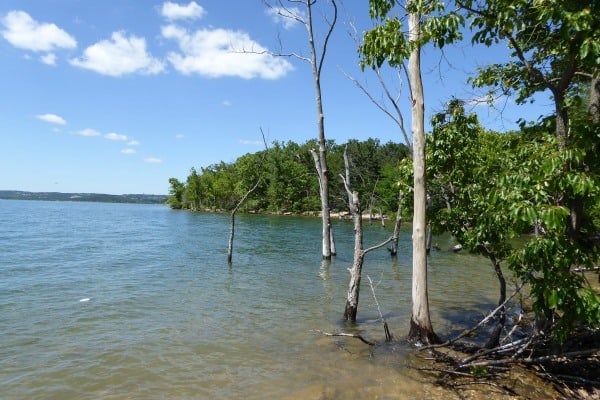 We had really enjoyed our view of Table Rock Lake from the safety of the Branson Belle, so we decided to take a closer look. After leaving Silver Dollar City, we stopped by the Visitor’s Center at the Table Rock Dam to learn more about the important role that the dam played in Branson’s history. I think you could say that without the dam, there would be no Branson, but I’ll come back to that in another post. 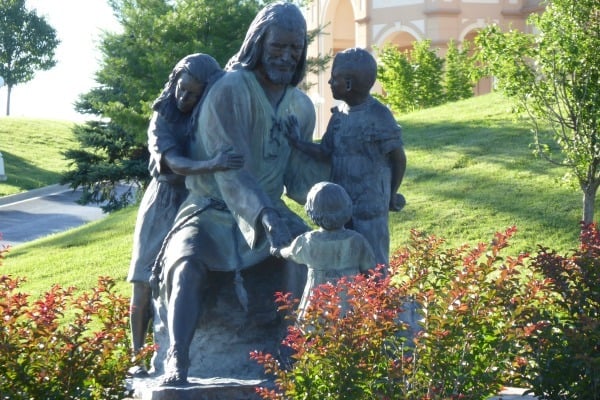 The show went above and beyond and is unlike anything I’ve ever seen. From the very first scene, I was amazed at the quality of the production, the attention to detail in the stage and scenery, and talent of the actors.

Before the show was over, I asked my husband if we could return with the kids. I know they would love Jonah as much as I did.

If you are interested, there are also Behind the Scenes tours available. Jonah is no longer showing, but this year, the Sight and Sound Theater will be adding a production of Samson. Having watched it in Lancaster, Pennsylvania, I can assure you that it is another incredible show. 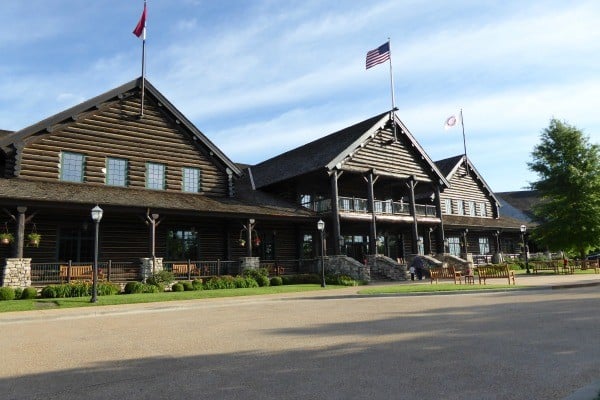 The College of the Ozarks

The Keeter Center at the College of the Ozarks

I’d never heard of College of the Ozarks before, but with kids that are college age, I was definitely interested in learning more after our visit. This liberal art, Christian college provides students the ability to work on site, allowing them to graduate free of student loan debts. The Keeter Center serves as a hotel, restaurant, and museum. If my husband and I head back to Branson, I really want to make myself at home in the Presidential Suite. 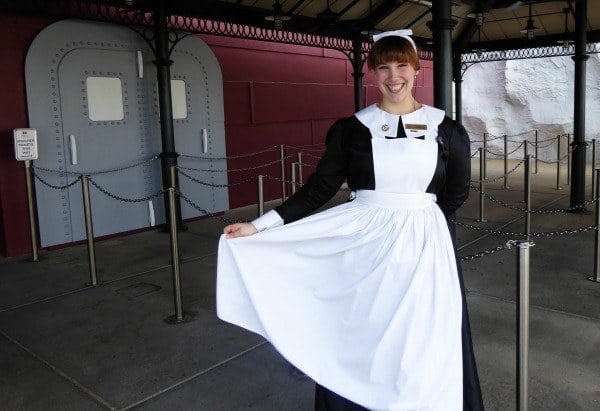 The Titanic Museum leads you through the story of the Titanic, from its exciting beginnings to that fateful day when tragedy struck. As you’re welcomed into the museum, you’ll receive a boarding pass with the name of an actual passenger, or crew member,  of the ship. You may see their name, or picture pop up during your self-guided tour of the museum and in the end, you’ll discover if they lived or perished. 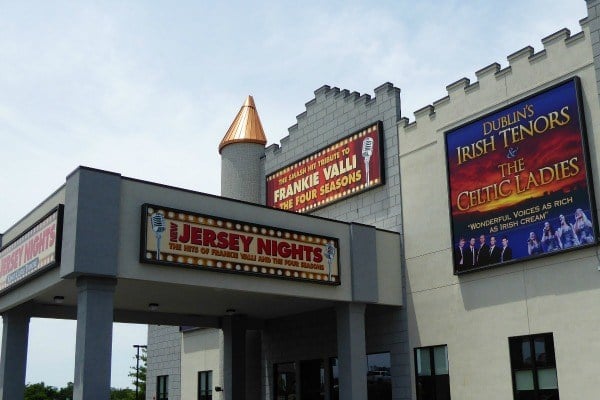 Take in a Show in Branson

After the Titanic Museum, we were ready for some live music so we headed over to the King’s Castle Theatre. Here is where I goofed up. Read descriptions thoroughly and don’t guess what a show is about based on a name. I had assumed that Dublin’s Irish Tenors & Celtic Ladies show would focus only on Celtic music. Had I read the description, I would have known that they sing a variety of music including opera, pop, swing and adult contemporary.I didn’t expect that but is fully disclosed in the show description. Oops!

I loved that this show began with a tribute to those who had served in the armed forces which once again, was a bit emotional for me. 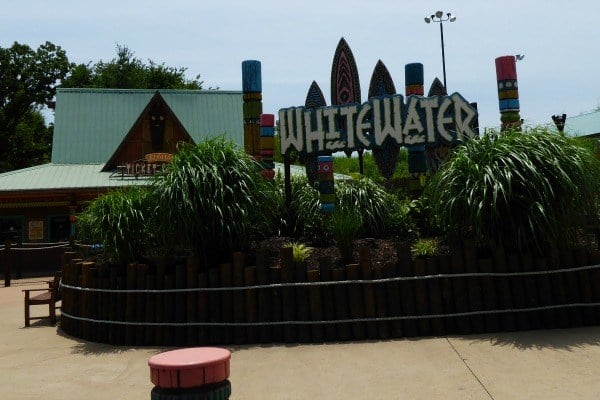 White Water is probably what my teens would have enjoyed most from our visit to Branson. When I told them about the KaPau Plummet, they were intrigued. If you’re feeling brave, step in, and hold on as the floor drops out, sending you free-falling for two stories before sliding down the tube.

My teens aren’t typically interested in water parks much anymore, but I think White Water may be an exception. With 7-story free-fall slides, a 500,000-gallon wave pool and an 800-foot lazy river, we may just need to plan a trip back to Branson. Don’t worry, White Water has attractions for the water babies as well at Coconut Cove and Splashaway Cay.

Are you planning a trip to Branson? Keep your eyes open for more in-depth reviews of the destinations. Have you visited Branson, Missouri? Share your favorite attraction.

If you’re planning a road trip to Branson, check out this post with 15+ Fun Roadside Stops to make on the way to Branson.

Check out TripAdvisor (affiliate link) for help finding a great place to stay.

If you’re looking for other unique towns to visit, we suggest Mt Airy NC and step back in time to Mayberry USA.

Very nice write up on Branson. Sight and Sound does have some awesome productions. This year they are featuring Samson and it is incredible.

Thanks so much! I saw Samson in Lancaster and thought it was great. Though between you and me, I enjoyed my experience in Branson more. ;)

Branson looks like a fun place to visit. Great photos. I like the riverboat image a lot. We've done Ride the Ducks in a couple of different cities and it's always a good time. I'll have to put Branson on our travel list now, thanks to you!