One thing I noticed on this road trip is that my body doesn’t adjust well to different time zones. It didn’t matter how late I fell into bed the night before, I still woke up way before everyone else. Day six of our road trip wasn’t any different. I woke up around four and tossed and turned, praying I could sleep for just a few more hours before finally deciding sleep had eluded me. I was awake.

I slipped out of bed and inched towards the restroom to get ready for the day, as quietly as one could be in a hotel room. After changing I attempted to sneak out the door and into the lobby when I realized that I had just exited the loudest hotel door I had ever encountered.

The lobby furniture was full of lounging people waiting to depart on the shuttle.  I detoured to the breakfast room and settled down with toast, a banana and orange juice, disappointed that there weren’t any blueberry muffins available. It wasn’t long before my family sauntered in to join me, evidence that I hadn’t been quite as stealthy as I’d hoped.

We were soon on the road. After all, we had seen California, now it was time to get home- or so my family thought. I had allotted ten days for this road trip and by golly, I was going to use those ten days to the fullest.

Our agenda for the day was to drive through Death Valley on our way to Las Vegas, where we would watch some of the free public shows in front of the hotels, and then spend the night in the city.

We jumped in the Suburban and drove for what seemed like hours before we finally found a visitor’s center en route to Death Valley. We stopped to take advantage of the restrooms and to grab some brochures. 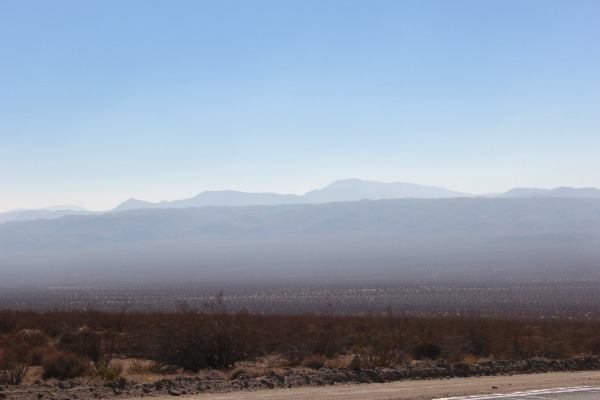 Back in the car, my husband and I plotted the route we would take through Death Valley and decided we wanted to see as many ghost towns as possible.

We continued to drive on and on with everyone in the car asking “Are we there yet?”

We were nearing the spot where the GPS, and the directions I’d picked up at the Ranger Station, indicated we should turn off when we found ourselves at the mercy of a detour due to a flooded out road that needed repaired.

We realized that the detour would add a substantial amount of time to our trip. We had already traveled an hour and a half longer than we’d originally thought and now we’d be on the road another hour and a half before reaching the entrance of Death Valley National Park.

We were now asking ourselves “Are we ever going to be there?”

We pressed on, thankful that we were traveling in the cool of November and grateful for modern transportation. 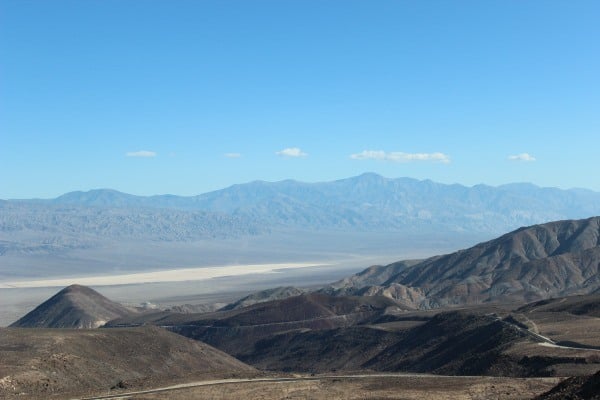 By the time we finally arrived at Death Valley, I was no longer having flashbacks of our visit to Cadillac Ranch, I was reliving it all over again. I was beginning to realize whoever named Death Valley, had chosen well. 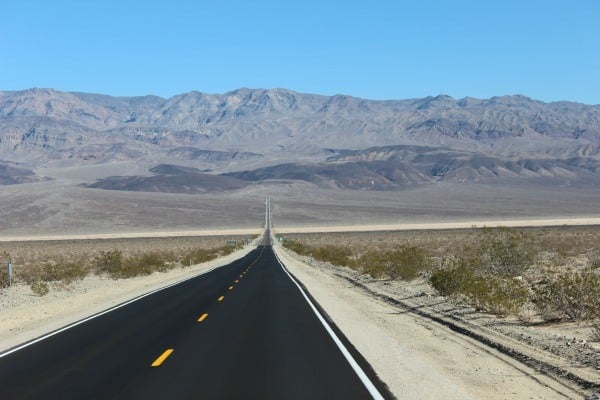 Though Death Valley was more scenic than I had imagined, I didn’t take many photos. To ask my husband to stop would have ignited a full-blown mutiny. I believe it was around this point that my oldest child began to search for a flight home. No kidding. A solo flight. Home.

I began to take photos by hanging my camera out the sunroof. 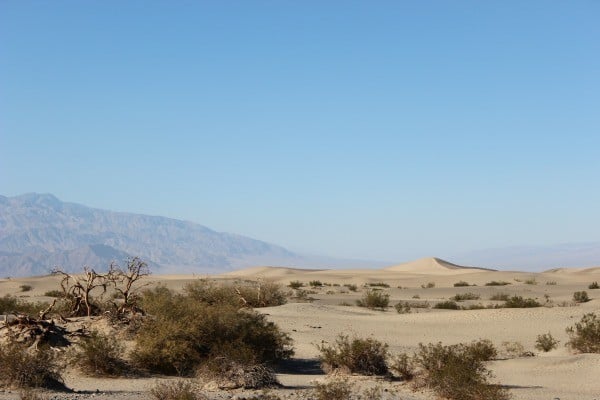 We continued past the sand dunes and I knew we had to exit quickly. My husband and I made the decision to abort our original plan and to take the fastest route out of the desert. 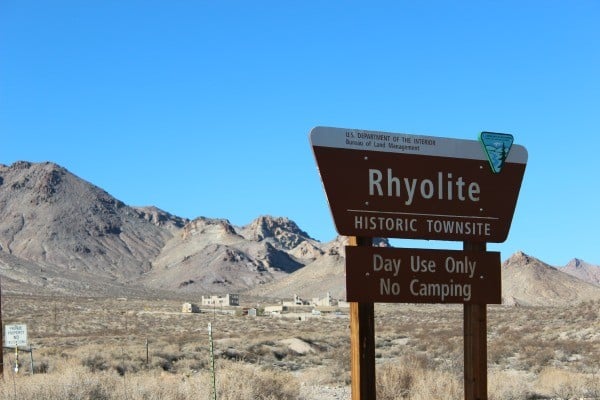 My brief disappointment of not seeing a ghost town was short lived as I realized that we were driving nearly directly past the largest ghost town in the park, Rhyolite. 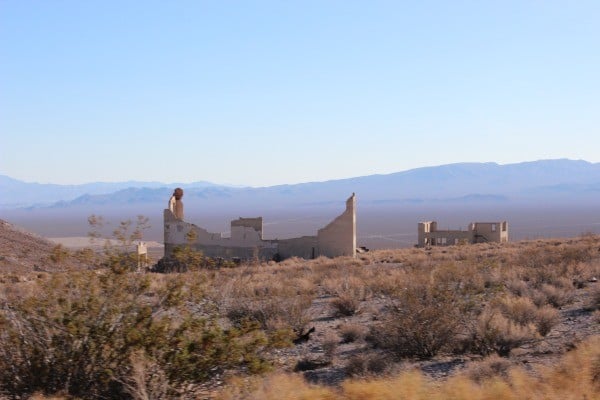 Despite grumblings from the back, we stopped to look around, if only briefly. I’ll share more about the ghost town that wasn’t as we’d imagined and the surprising roadside attraction we found another time.

Jumping back in the car we knew we needed to escape Death Valley before we all went insane.

We drove on to Vegas, arriving much later than we had ever planned. Friday night in Vegas is a bit busy. 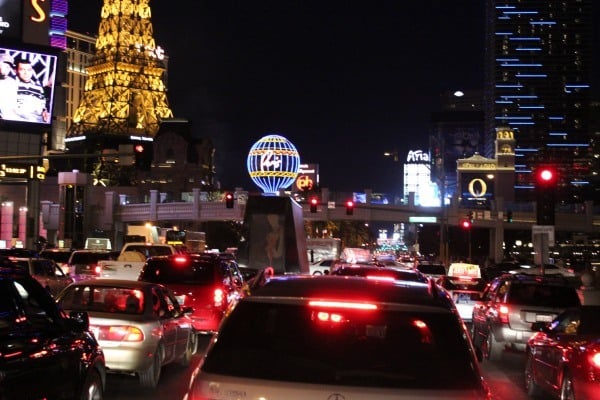 I don’t know what my husband imagined, but it wasn’t what we found. After three separate cars nearly ran into our rental vehicle, my husband decided that Las Vegas traffic was worse than Las Angeles traffic. He’d had enough and we headed off the strip and towards the Gold & Silver Pawn Shop where modern legends from the show, the Pawn Stars, sometimes make appearances. 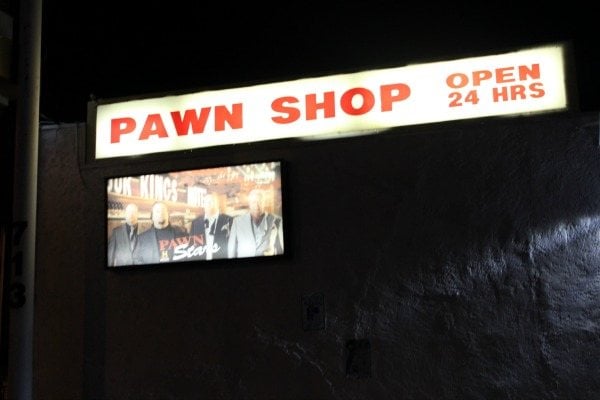 We weren’t at the pawn shop long, literally running in and out so that the only photo I got of the inside is a blur. And of course non of the cast of the series was there.

Originally, we had planned to spend the night in Vegas but that wasn’t going to make anyone happy. We continued on driving for several more hours before we could finally call this day a wrap.

Need to catch up?

This is what our map should have looked like. Let’s just say we spent way more time on the road and drove many more miles than this map shows.

Entertainment/Souvenirs: $0 (with America’s Park Pass that we purchased at Painted Canyon and the Petrified Forest)

Miles traveled for the day: 610 (not accurate, but the best I can do right now)

Total miles traveled for our trip so far: 3407

I made that drive once, but it was not really intended.

Did you get lost?

I remember that we did a trip through death valley when I was a kid, but that is about all that I remember about it.

I am sure that the tense moments were a bit frustrating, but you have created lifetime memories for your family, and future generations. You will probably laugh about some of these stories soon.

bummer that it wasn't what you expected. I love old ghost towns - and we are also big Vegas fans.

I can't wait to read more about Death Valley. It looks almost eerie just from the pictures.

What breathtaking views. I must add this to my "must visit before I die" list.