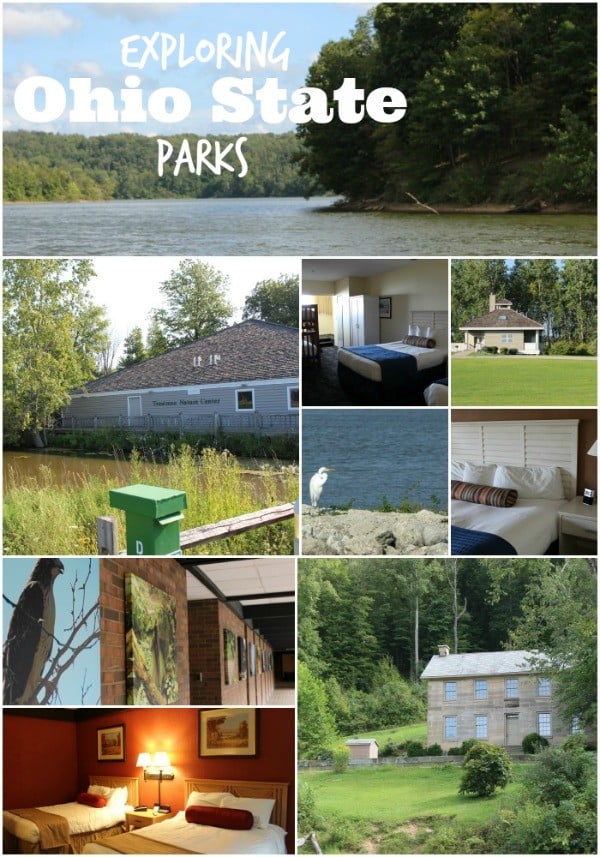 When I asked my daughter if she was interested in joining me on a press trip featuring the Ohio State Park Lodges, she had no idea how much fun it would be, and neither did I. We joined bloggers from around the world for a four night, five day tour of three of Ohio’s State Parks, exploring the lodges and nearby attractions.

Our first stop was Salt Fork State Park, a couple hours southeast of our home in North Central Ohio. I’d spent several years during my tween and early teen years in the Cambridge area visiting family. I’ve hiked the trails at Salt Fork, swam in the lake, sunbathed on the beach and heard stories of Big Foot hiding in the woods. I was looking forward to experiencing a place that I was fond of growing up, with my nearly 18-year old daughter.

We followed the GPS to the turn off for the park and continued to drive for what seemed like an eternity before the lodge came into view. The scenery is beautiful- with wooded rolling hills that open up to surprise you once or twice to give you a glimpse of the lake and the native wildlife. I would have enjoyed that drive, had I taken the time to fuel up my minivan when I exited the interstate.  (Take my Advice: If you’re low on fuel, make sure you stop to fuel up when you exit the interstate as the nearest gas station is about 15 miles away. )

The lodge is exactly what I imagined it to be. Lots of wood, leather furniture, gorgeous views. It was a bonus that we were welcomed by the friendliest front desk clerk, who made us feel right at home immediately. We headed past the large indoor pool to our comfortable room for the next two nights and didn’t waste any time freshening up from our drive so we could explore before joining our group for a boat tour of the lake.

It was a beautiful day which goes to show that you can’t always believe the forecast in Ohio, which had predicted rain for the day. As we set off on our guided pontoon boat ride, we learned that the lake is actually man-made, heard the story of  how the park came to be and saw where Big Foot could possibly reside, if indeed he exists. 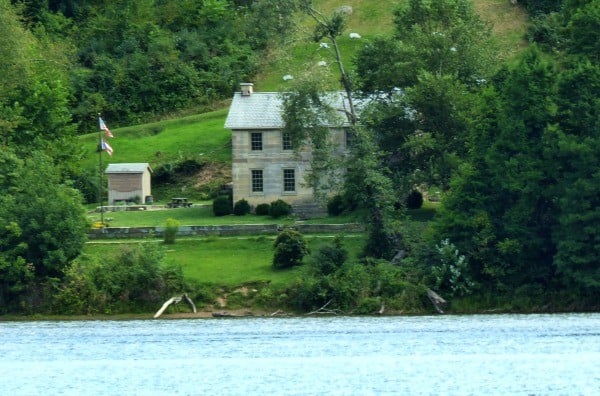 After the boat ride, we had the opportunity to go geocaching, but  my daughter balked at the idea and didn’t want me to go without her. I think her decision had something to do with the friendly front desk representative exclaiming how muddy the trails would be. I let it slide and we skipped the activity, though I regretted that decision almost immediately.

Dinner was a special treat for me.  I was able to interact with representatives from many of the attractions in Cambridge, if there’s something I love, it’s to talk travel and tourism (just incase you didn’t know by now). My daughter and I learned about the Great Guernsey Trail, a six-mile trail for walkers, bicyclists and equestrians, the National Glass Museum, Guernsey County Historical Museum and the Hop-a-long Cassidy Museum. 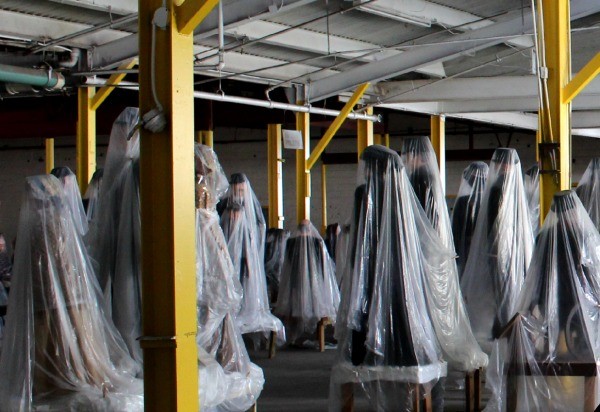 We spent day two exploring some of the area attractions we’d heard about at dinner.  Our first stop was to the Dickens Welcome Center, in downtown Cambridge. Each November, nearly 200 hand-crafted figures transform the streets of Cambridge to scenes from Charles Dickens’ England for Dickens Victorian Village. We were treated to a special behind the scenes tour at the Dickens Universe, the warehouse were the magic happens and the figures are stored. My daughter and I differed on opinion here. As I found the tour fascinating, she found it creepy. Never fear, you don’t need to subject yourself to the tour to enjoy the streetscapes that takeover the downtown each November. 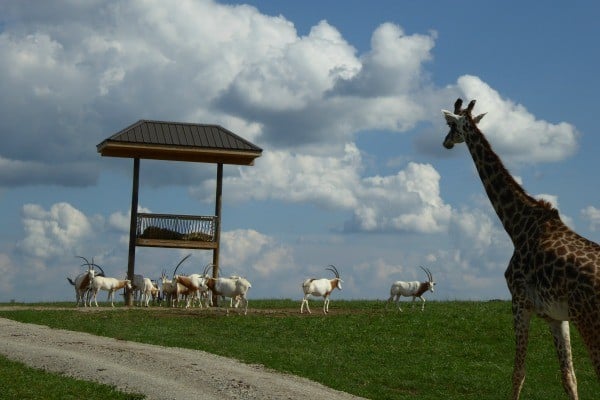 From there we were back on familiar turf as we visited The Wilds, the largest conservation center in the United States. We embarked on a bumpy ride through the pasture in search of the creatures who call The Wilds home. As a family, we’ve had annual passes to The Wilds on several occasions but this visit was one my daughter will never forget, as the Bactrain camels nearly took a bite out of the bus, and she got to pet a baby rhino! That’s right, the folks at The Wilds sure know how to impress a teenager (and more than a few adults). 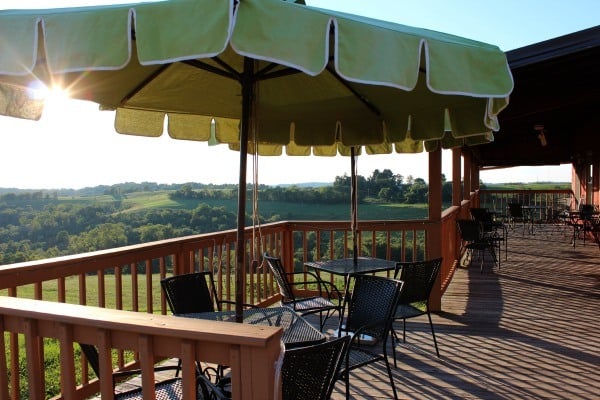 It was all downhill from there for Chelsea, as I discovered she is really picky when it comes to what she will eat. Though I thought our meal at The Terra Cotta Vineyards was incredible, all my daughter could think of was the fine cuisine of, wait for it….. Little Caesar’s That’s right. She wanted a pizza.  Go figure. So when we arrived back at the hotel that night, guess who made a special trip into town to satisfy her hunger? 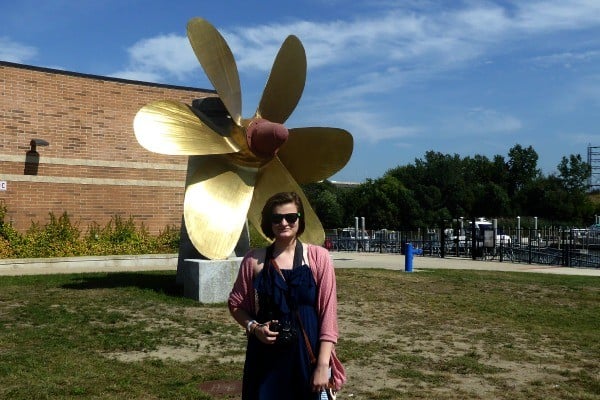 We woke early  the next morning and embarked on a three hour drive to the northwestern part of the state to explore the city of Toledo before calling it a day and heading to Maumee Bay Lodge on the shore of Lake Erie.  After eating a delicious meal at the Real Seafood Company at the Docks,  we visited The National Museum of the Great Lakes and quickly realized that we simply would not have enough time to fully explore and definitely need to plan a return visit.

From there it was on to the zoo. I have a very faded memory of visiting the zoo as a preschooler with my late grandparents’. All I remember was the hippoquarium so I really hoped to see it this time as well. It didn’t look like we would be able to fit it in, but we did and I have a hilarious story to share another time. Don’t worry, I promise you it is worth waiting for. 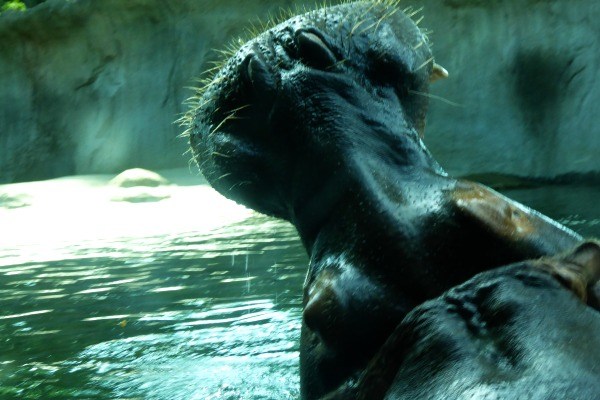 Although it was not the type of day I would ever have chosen to spend at the zoo- it was hot and humid and we were all sweating profusely,  it was an great group of people to spend time with and I’m glad I got the opportunity to revisit an attraction from my childhood. My daughter and I really couldn’t wait to check in to Maumee Bay State Park Lodge and jump in the tub before dinner. But, when we were offered the chance to visit The Toledo Museum of Art, I didn’t hesitate, despite the death glares from my daughter. The museum was very impressive and when I returned home, I told my son about it and he took my suggestion and visited a week later. Unlike his sister, he was impressed by the scope and breadth of the collection. 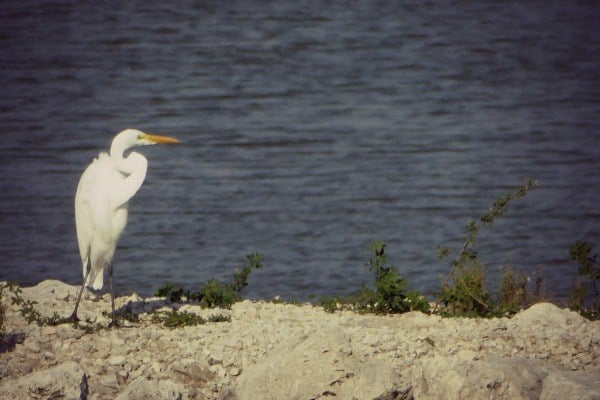 Maumee Bay Lodge couldn’t ask for a better setting. Located on the shore of Lake Erie, many of the rooms offer lake views with stunning sunrise and sunset displays. In addition to lodge rooms, Maumee Bay also has cottages, a Nature Center, nature trail, bike rentals, beach access  and a golf course.

After a quick stop at Bench Farms Farm Market and Greenhouse to see where much of the fresh produce for Maumee Bay State Park is grown, we continued to Magee Marsh which offers world class bird watching during the spring Warbler migration. I had hoped to spot one of the bald eagles that calls the area home. I didn’t see any eagles, but I did get a glimpse of one of their nests. We then turned out vehicles south and began the two and a half hour drive to the Mohican area, which is in my neck of the woods.

Arriving in Loudonville, we stopped at Mohican Adventures for an afternoon of fun to play putt-putt, test our upper body strength on the rope challenge course, or kayak, raft or canoe on the river. Chelsea and I opted for a leisurely seven-mile canoe ride with two other participants. It wasn’t as relaxing as we’d imagined it to be. The water was pretty low and several times we nearly got stuck on the bottom. We spent two and a half hours navigating the creek, narrowly missing downed trees and branches, imagining that we’d been on the creek much longer than we really had. And just when our adventure was over, my daughters’ day was made. The moment she had been waiting for and one of my most embarrassing moments ever. Let’s just say that I’m relieved that Chelsea didn’t have her phone to record the moment to watch over and over again.

The Mohican State Park Lodge was a short drive from downtown Loudonville, so I didn’t have ample time for my clothes to dry. I dropped my daughter off at the front of the lodge and waited while she retrieved the key to our room. I was so thankful to have just enough time to quickly shower and dry off before dinner.

The majority of the food served for our meal was locally grown and both the chef and the food supplier were on hand to answer our questions. Did you know that when we buy food from a supermarket, the average travel time is 1,500 miles? I try to eat foods that are grown locally- my family even raised our own chickens this past summer- so to learn that this is something the state park lodges deem important impressed me. 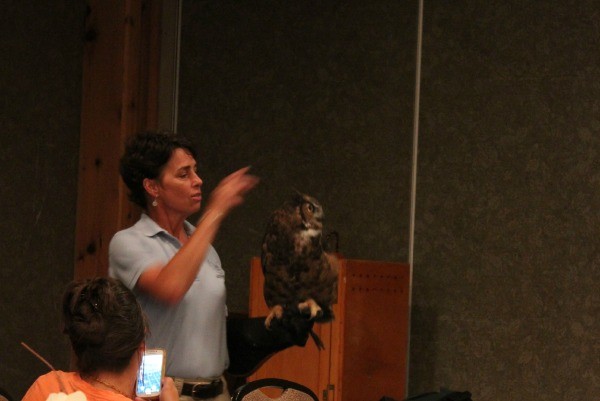 After dinner, we enjoyed a presentation from the Ohio Bird Sanctuary where we were able to take selfies with the stars of the show.

The Ohio State Park Lodge press trip was a great getaway for my daughter and I and certainly provided plenty of bonding moments- not only for us, but with the other bloggers as well. Let’s just say, it was a pretty unforgettable trip. And one that neither my daughter, nor I will soon forget.

Are you interested in learning more about what the Ohio State Parks have to offer? Keep an eye out for more posts sharing our experience. 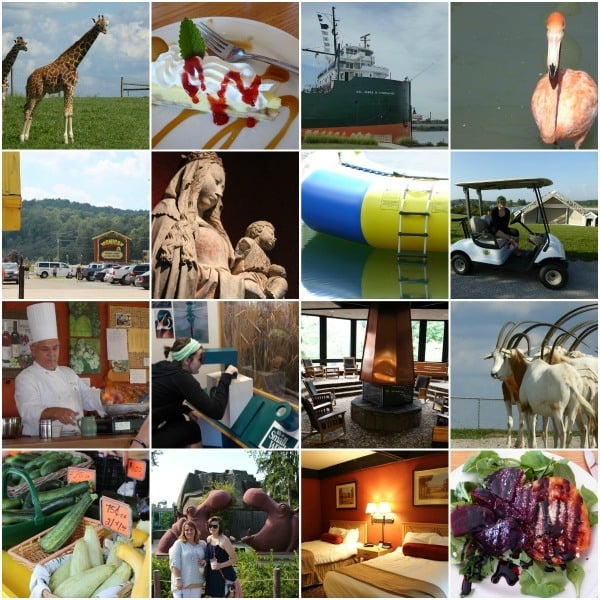 Related Posts:
The Day My Life was Made
Hike the Pleasant Hill Trail at Mohican State Park
The Wilds: Perfect for Multi-generational Family Fun

Disclosure: Special thanks to Xanterra for hosting both my daughter and I during the Ohio State Park Lodge Press Trip so we could share our experience with my readers. All thoughts and opinions are my own.