Once again, it’s time for Field Trip Friday and I have to say that when it comes to museums, this weeks field trip was one of the best that we’ve had in a long time.  Our destination was to The Historic Weeden House Museum in downtown Huntsville. From the moment we stepped inside the air conditioned home and were seated in the parlor we were treated not as tourists, but as guests.

We sat on the period furnishings enthralled by the tales of the museum’s director,  Barbara Scott. She got our attention right away when she claimed that there was 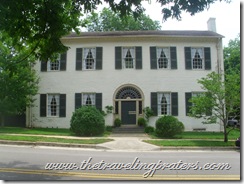 a ghost or ghosts in the house.  Apparently they have been sighted on several occasions by different people. I can’t say that I was eager to see a ghost, but the stories did raise the hair on my arms.

The historic home was built in 1819, the same year that Alabama became a state, by a wealthy mercantile business owner, Mr. Bradford. At that time he paid $50 for a block of land and had the home built. The museum, which is located in what is called the Twickenham District, is now worth $3-4 million dollars! The Historic Weeden House Museum is the oldest home in the state of Alabama that is open for tours.

Mr. Bradford lost his fortune and the home was sold and passed through a couple 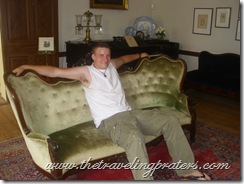 families before settling with the Weeden Family in 1845. Dr. William Weeden had 1500 slaves, owned 3 other antebellum homes,  as well as the land that is now known as the Redstone Arsenal. He sold his property, moved in town and settled into the Weeden House with his family. Six months later, he died of a heart attack while on a business trip to New Orleans. Shortly after, his wife gave birth in the home to another daughter, Maria Howard Weeden. 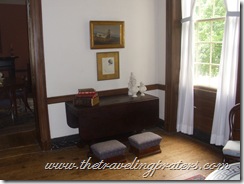 d to live in the home until April 1862 when the Yankees came to town and ordered them out.  The home was used as headquarters for Federal officers during the Civil War. The women fled that night with their slaves while Maria’s three brothers  enlisted  in the Confederate army. Remarkably, all three boys returned home after the war uninjured.  The family was now impoverished and in order to eek out a living, Maria, known as Howard, began to paint and sell her work. She would paint by the window in the parlor with a paintbrush consisting of three horse hairs.

She was so near-sighted that her nose would nearly touch the paper as she painted, yet she painted beautifully often selling her note cards and dinner cards for a dime a piece. Today a single painting of hers could sell for $20,000!

In 1892 she visited the World’s Fair in Chicago and was upset that the paintings she saw of black people did not look like the people she knew. She began painting her dear colored friends and that is what she is most well known for today. Not only did she capture the faces of those she’d grown to love, but she also captured their thoughts, voice and personality in the poems that she wrote to accompany her paintings. 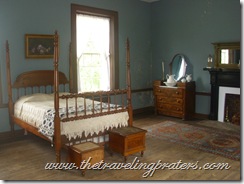 Howard Weeden published four books, one of those, Bandanna Ballads was copied and used to design the slave costumes for the movie, Gone With the Wind, though she never received proper credit. She also created silhouettes for Charles Dickens.

It is unclear exactly how many paintings Howard Weeden created in her lifetime, but you’ll see over 20 on display at the museum today. 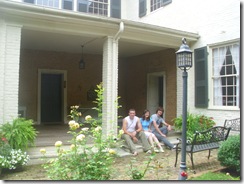 Maria Howard Weeden passed away in poverty at the age of 57 from tuberculosis in the same room that she was born in.  The home remained in the Weeden family for 111 years.

Today the home is owned by the City of Huntsville and leased by the Twickenham Historic Preservation District Association. Not only is the home open for tours, it is also available for weddings and entertaining.

Our self guided tour concluded with a delicious glass of lemonade on the back porch while we wandered the yard , viewing the rose garden and slave quarters which have been renovated into bathrooms.

If you are ever in Northern Alabama, I HIGHLY recommend that you visit The Historic Weeden House Museum. It is very reasonably priced. You can also pick up discount coupons at the Huntsville Visitors Center to save 20% . You’ll find additional information about the museum here.   Of course if you do find yourself in the area, make sure you take the time to explore Harrison Brothers Hardware Store too, it’s only a few blocks away.

Thank you for stopping by for this week’s edition of Field Trip Friday. If you’re just joining us make sure you take a peek at some of the other excursions we’ve taken.

*Barbara Scott is no longer the director of the Historic Weeden House Museum. We have toured the home since her retirement and have enjoyed the tour with the new director as well.

Hello Tonya, The Weeden house was built by my 2nd Great Grand Uncle and Aunt, Henry Chinchester Bradford and Martha Patsy Turner, they were married in Nashville Tennessee 18 September 1817. They moved to Huntsville later on and he went into the Mercantile business. He lost his business soon after the home was built and had to sale it. They later moved to Pinebluff , Arkansas where he became a MD and had a successful practice. I have a photo of both of them while living in Pinebluff, AR. My G Grandmother was Caroline McGavock Turner Tate of Nashville Davidson Tennessee, that how I know this history, it was passed down by her as well as other family history.

That's fascinating, Terry. It's great that you know so much about your family history and I appreciate you sharing it.

I love old homes, and I love the stories behind them!

Thanks Tonya! We ended up back to the Library Program again this week as our big outing. :) Mommy's Field Trip was to watch Eclipse by herself. :) We'll get out exploring more land mark type areas as the weather clears. :)