I was excited to learn that replica’s of the Niña and Pinta would not only be making a stop in Huntsville, Alabama, but that they’d be docking not even 15 minutes from our home. One of our all time favorite field trips was to see the replica of the Santa Maria in downtown Columbus, Ohio. The kids were much younger on that trip and we’d just wrapped up a unit study on Explorers. Our tour guide was amazing and we had the ship all to ourselves. What a perfect outing! When I found out we’d have the opportunity to visit Columbus’ companion ships, I couldn’t wait!

Arriving at the dock, we were surprised to find that both the Niña and Pinta were smaller than we imagined they would be. After spending a few days on a rocky cruise ship, I couldn’t imagine sailing across the ocean in the boats that were on the water before us.

The Niña and Pinta are both caravels, a type of cargo ship commonly used during the Age of Discovery when Explorers roamed the seas.   These two great replicas of Columbus’ ships were constructed in Brazil under the direction of an American engineer and maritime historian, John Patrick Sarsfield. The ships are both historically accurate replicas of a 15th Century Caravel, built using techniques dating back to the same time period. 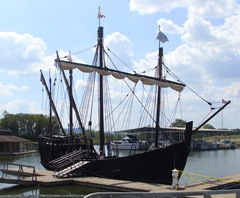 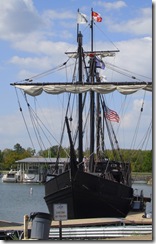 Since both of these ships are both sailing vessels we were warned before boarding that we were not to untie any of the ropes. We could look at them, touch them, photograph them but under no circumstances were we to untie them. Ropes were everywhere! 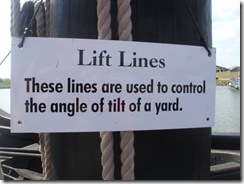 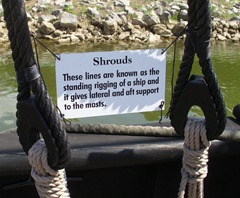 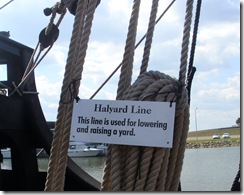 The boats were also painted black to represent the icky, sticky pine tar that would have been used to preserve the wood on the boats. 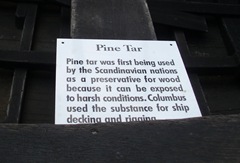 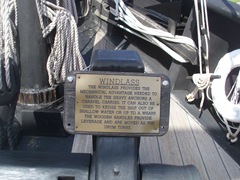 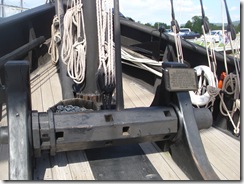 We also found it interesting that the ships had square sails rather than triangular ones to catch the trade winds. 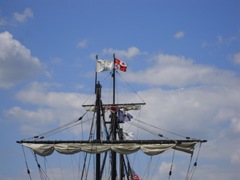 Today these ships spend warm weather traversing the rivers and lakes of the Western Hemisphere offering tours to the public as the ships dock in various locations. The crew members volunteer and we found it extremely interesting that our tour guide had just joined the crew three weeks earlier in Kentucky while vacationing with his family. He saw the Crew Wanted sign and away he sailed. He hasn’t been home since and will spend the winter in Mexico while the ship is dry docked for repairs. Now that really is an adventure, isn’t it?

You can find a schedule for the ships here and if you are lucky enough to have the dock in a marina near you, check out this easy Ships in a Bottle tutorial at Noggins and Nonsense. It would make a fabulous follow-up activity that your younger students will enjoy.

Have a field trip that you’d like to share? We’re all ears, so please do. It’s really simple. Just link up with Linky Tools. It’s not necessary, but I would be grateful if you included a link back to my site so more people can learn about Field Trip Friday. Don’t forget to stop back next week for more Field Trip Friday fun! Until next week~ Happy Field Trippin’! 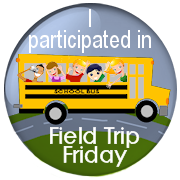 So glad to hear that you were able to see the ships while they were in Chattanooga! They really are neat...I still think it would be a lot of fun to volunteer on one of the boats!

WE went!! and it was one of the neatest things we have done! we had to wait till this past fri. and the weather was as neat as the boats. the only bad thing was early that morning the smoke from the fires on signal mnt. was comeing into town but thankfully the wind changed and we all had a great day.

WE went!! and it was one of the neatest things we have done! we had to wait till this past fri. and the weather was as neat as the boats. the only bad thing was early that morning the smoke from the fires on signal mnt. was comeing into town but thankfully the wind changed and we all had a great day.

Anonymous- How cool that you'll be heading to Chattanooga to see them! I hope you really enjoy your trip.

The ships are about an hour away from us this week and one of the homeschool groups had scheduled a tour to see them on Columbus Day! How cool would that have been? I was almost jealous! :)

how cool!! so glad your kids liked them. We are driving to chattanooga next weds to see them. I hope they are as neat as i think it will be!!