Last week, the kids and I accompanied one of the homeschool groups that we belong to on a naturalist led hike at Russell Cave National Monument. You’ve heard me mention this amazing attraction several times before because not only is it one of my favorite places to visit in Northern Alabama, it is now on my list of favorite fall hikes.

We arrived at Russell Cave National Monument, viewed the small museum display and began our tour by watching a short 7 minute movie. The video gave a brief history of the cave while focusing on the  story of its joint excavation by the National Geographic Society and Smithsonian Institution.

Next we took a quick walk along the broadwalk to the cave entrance. Once inside, one of the Park Ranger’s, who is also the Park Historian shared more of the history of the cave with us.  We heard about the nomadic people that once frequented the Russell Cave following food and seeking shelter during the cold winter months; a great lesson in the early people of Alabama. 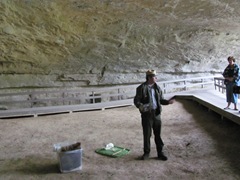 We learned about the hunting practices of the Indians at Russell Cave, how they would hunt deer by camouflaging themselves with deer skins and antlers. Apparently, they were pretty believable because they have found at least one hunter killed by an arrow while dressed for the hunt and believe he died as a result of an accidental shooting.

It was also interesting to learn that they would fish by throwing the powder from crushed Buckeyes into the stream leading to the cave. The powder, which is poisonous to humans would paralyze the fish and they would float to the top of the water allowing the Indians to scoop them out one by one.

We also learned about the excavation of the cave. Did you know that archaeologists do when they find fossilized poo? They can warm the feces which will soften it and then they go through it to see what people at that time, thousands of years ago, ate. Sounds like a smelly job to me.  Gross tidbit of information, but memorable.

A weapons demonstration followed the cave talk and ended with the opportunity to try out an atlatl, bow & arrow and blow gun.

The atlatl was hooked to the spear, increasing its power up to three times.

Though we enjoyed each aspect of the field trip, our favorite part was the hike along the nature trail. Not only is the naturalist that we accompanied very knowledgeable, but we were also pleased with ourselves for finishing this short hike after the ordeal we faced the first time we attempted it. (You really do need to go read that, and let me just say that 80ish degrees in the fall is much different than 80ish degrees in late spring here in Alabama! )

The trail is still mainly up, up and up, but the fall foliage was certainly a site to see, especially when you were at the top and able to look down over the trail to see the rock outcroppings strewn along the path below. It was quite beautiful. I will warn you that though this is a paved hike, it is steep heading up and heading down so be prepared to give yourself plenty of time to rest along the way. You’ll be happy to know that after every major incline, you’ll find benches available so you can rest and catch your breath if needed. 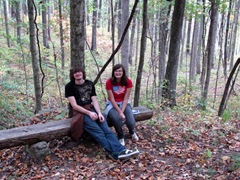 Though the park service says this is a 1.2 mile hike, I can’t count the times I heard someone gasping, this is only a mile?  I found it interesting that The Falcon Guide: Hiking Alabama  claims that the hike is a bit longer at 2 miles in length and it certainly feels longer yet.

This was an incredible outing and though we’ve enjoyed the times we’ve been there on our own as a family, it was that much better going with friends.

The kids and I recently began reading about Alabama state history, now that we are official residents and I’ve decided that we will incorporate many field trips into our study. Russell Cave National Monument was a great place to start.

If you stopped by for Field Trip Friday, make sure to read this post to find out about the changes taking place and don’t forget to stop back next week for the 1st monthly edition of Field Trip Friday!

Until next week~ Happy Field Trippin’!

I had been arguing with my close friend on this issue for quite a while, base on your ideas prove that I am right, let me show him your webpage then I am sure it must make him buy me a drink, lol, thanks.

this is the way a blog should be! thanks!