Roadside attractions are the perfect way to break up a road trip and if you ask my family, it’s even better if that attraction turns out to be somewhere you can eat too. Today I’m sharing about my experience visiting the very first Kentucky Fried Chicken store, the Harland Sanders Café and Museum, located in Corbin, Kentucky, a short distance from the Interstate.

This fun stop is right on the way for those heading to the popular southern vacation states of Tennessee, North Carolina and Florida.

If you’ve ever grabbed a tub of finger licking good Kentucky Fried Chicken and asked yourself, “Where was the first KFC?” then this post is for you!

You’ve come to the right place because not only can I point you in the right direction, I’ve actually visited the Harland Sanders Café and Museum on several occasions. The KFC museum makes the perfect stop to grab a bite to eat and stretch your legs when road tripping past Corbin on Interstate 75 through Kentucky. You’ll find more fun stops off I-75 here, here and here.

Now, back to that question.

Where is the original KFC?

The original KFC can be found in Corbin, Kentucky.

Listed on the National Register of Historic Places, Harland Sanders Cafe and Museum is the birthplace of one of America’s icons, and my husband’s favorite fast food restaurant, Kentucky Fried Chicken. 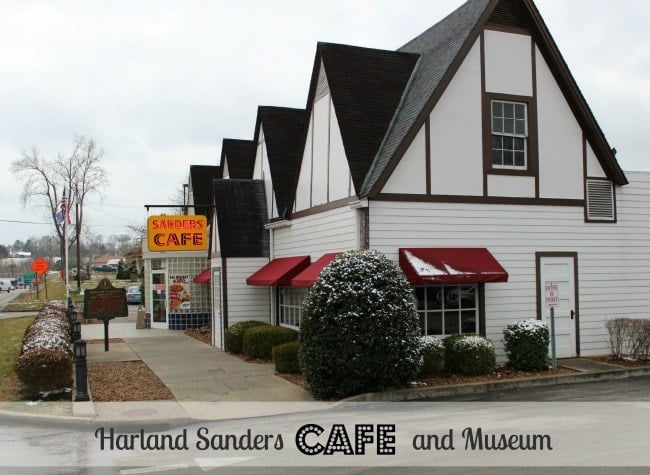 My family drove past the Corbin exit on I-75 for years and each time, I would comment how much fun it would be to stop and grab a bite to eat ‘next time around’. When we planned our road trip to the Smokies a few years ago, I knew the time had arrived for us to finally stop and take a look around the Harland Sanders Museum.

As we pulled into the parking lot, my kids groaned. They were clearly not impressed by Colonel Sanders Cafe, but I encouraged them not to judge a book by its cover.

I, on the other hand, was giddy with excitement and couldn’t wait to explore the Kentucky Fried Chicken museum located inside.

The wood-sided exterior was welcoming and a historical marker positioned across from the vintage neon sign that read Sanders Café notified us that we were in the right place. Side A read:

BIRTH OF A LEGEND

Colonel Harland Sanders began the part of his life that brought him fame in a small gasoline service station on the opposite side of this highway. Born on September 9, 1890, near Henryville, Indiana he left school at twelve to support his family. He held a wide variety of jobs as farmhand, soldier, railroader, secretary, insurance salesman and ferryboat operator until 1930 when he came to Corbin, moved his family in the quarters behind the station and started pumping gasoline. This was then a main route to Florida from the north. Traffic slowed during the Great Depression so Sanders, who enjoyed cooking, augmented his meager income by selling meals to tourists. His food was liked, His reputation grew and his career as a restauranteur began. 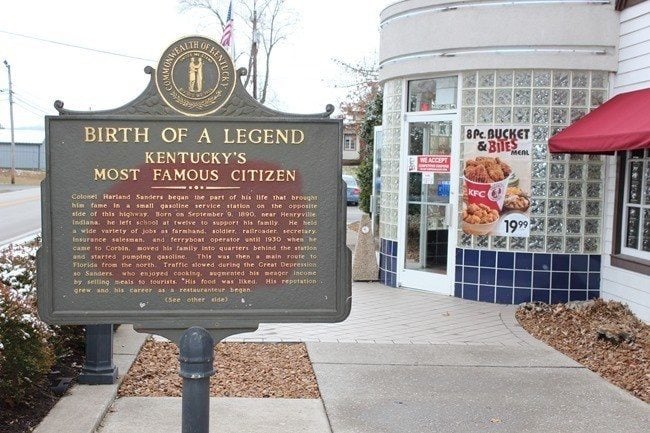 Continued on Side B:

In 1932 Colonel Harland Sanders bought the small restaurant near this site. Here he combined good cooking, hard work, and showmanship to build regional fame for his fine food. His restaurant and mote, now gone, flourished. To serve his patrons better Sanders constantly experimented with new recipes and cooking methods. Here he created, developed, and perfected his world famous Kentucky Fried Chicken recipe. In 1956 plans were announced for a Federal highway to by-pass Corbin. Threatened with the traffic loss, then 66 and undaunted, sold the restaurant and started traveling America and selling seasoning, and his recipe for fried chicken to other restaurants. His success in this effort began the world’s largest commercial food service system and made Kentucky a household word around the world. 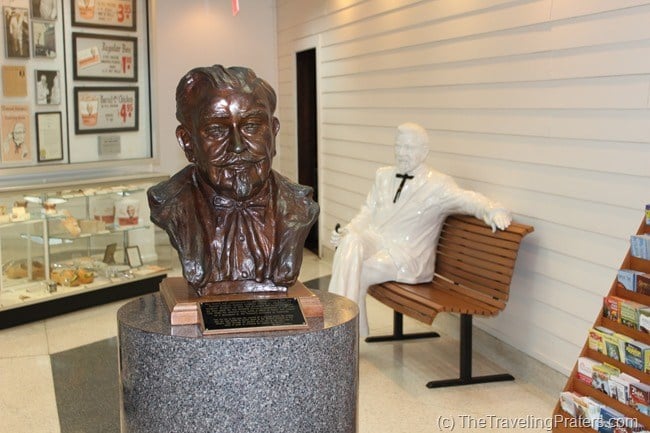 What will you See Inside the First KFC in Kentucky?

Stepping inside the restaurant, you’ll immediately see display cases showcasing memorabilia from bygone days as well as a fast food counter that looks much like the counter at any other KFC across the country. 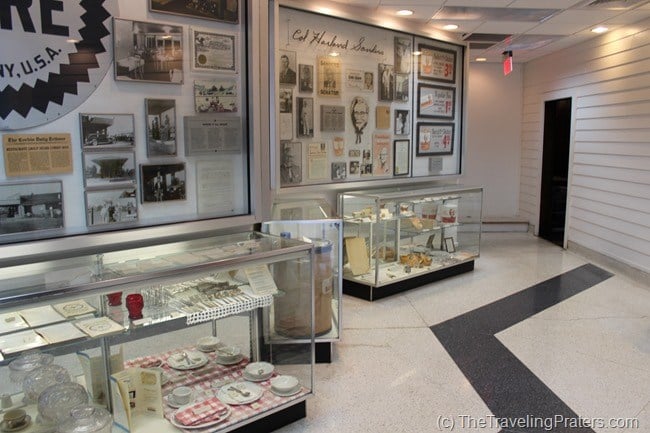 While my husband placed our order and waited for our food, the kids and I wandered around, viewing the display cases. We saw KFC memorabilia, original place settings, menus and even scraps of paper of Colonel Sanders hand-written recipes. 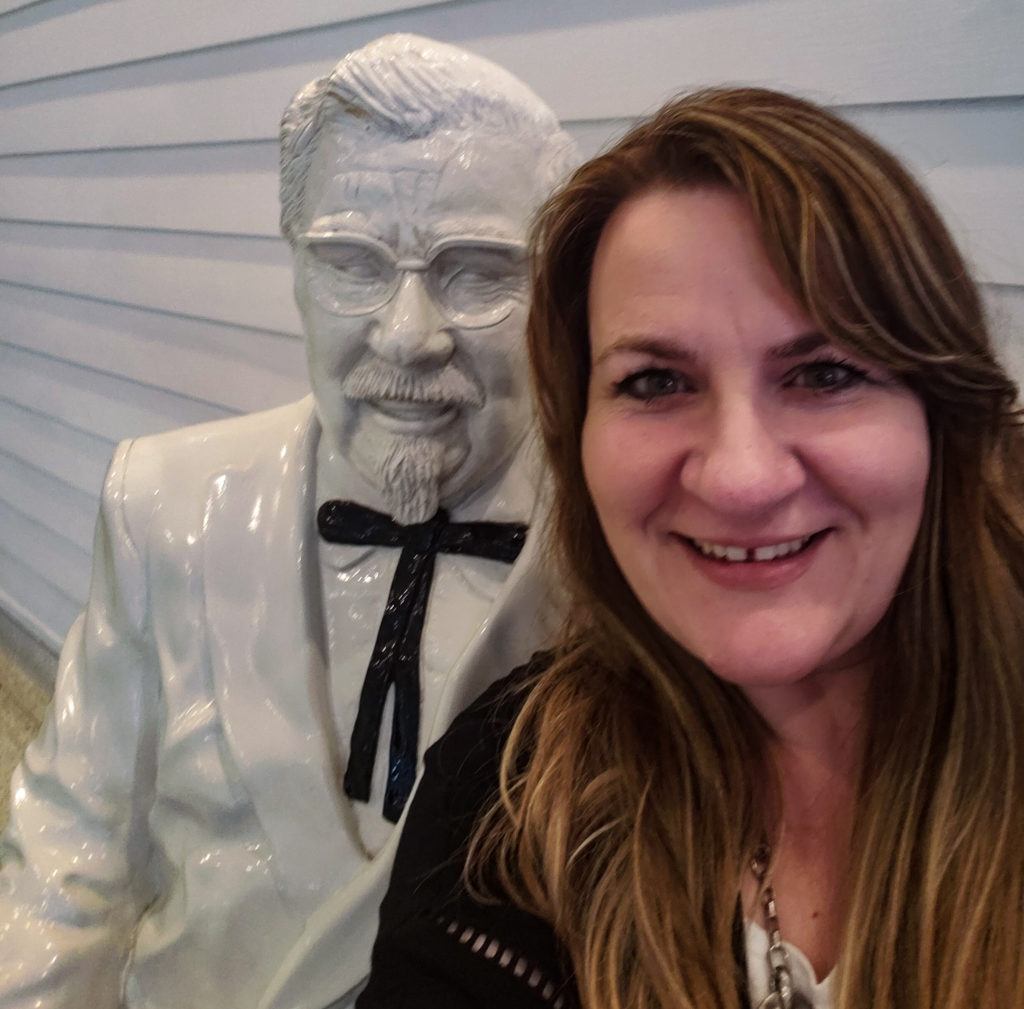 The kids’ and I took turns posing with the life-size Colonel Sanders statue and it’s a tradition that I continue each time I stop. 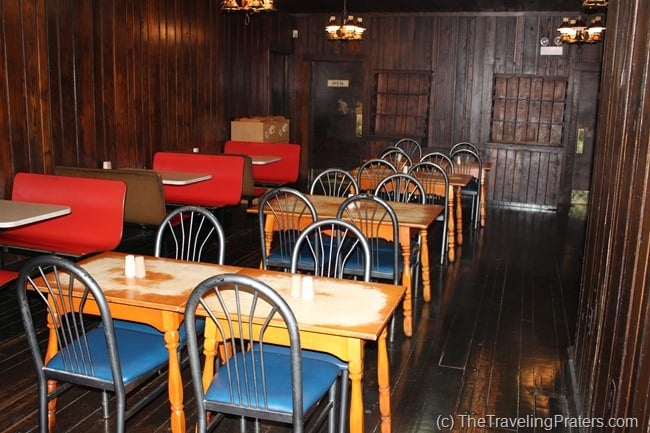 Stepping into the dining room was like stepping back in time. I’m told the dark creaking floors and dark paneled walls are reminiscent of the original 1940’s lobby. 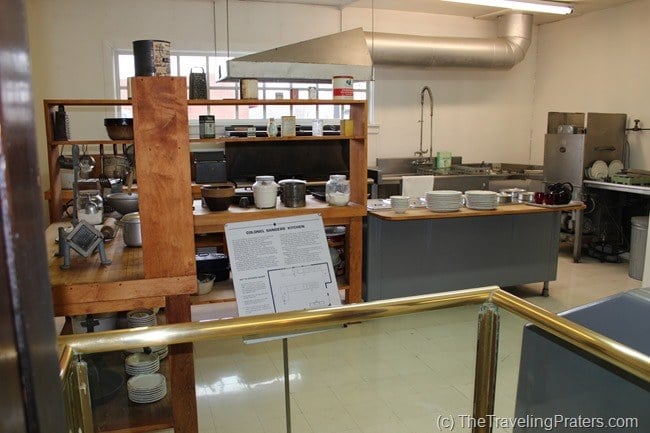 Surrounding the lobby are several displays, including the kitchen where the original “Finger Lickin’ Good” Kentucky Fried Chicken recipe was perfected. 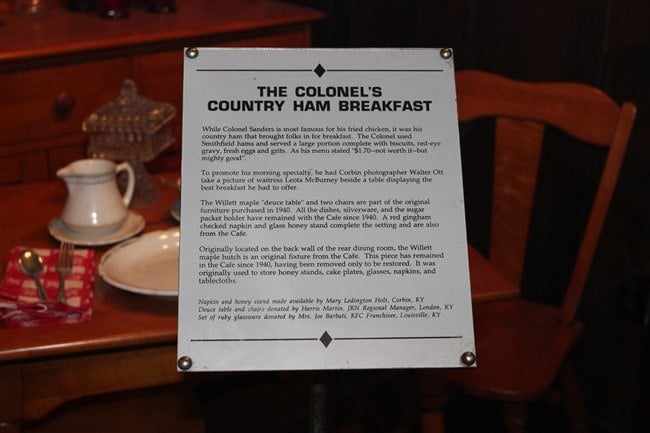 We also learned that while Colonel Sanders made Kentucky Fried Chicken a household name, he didn’t always serve only chicken. He welcomed his guests for a breakfast of Smithfield ham, biscuits & gravy, fresh eggs and good ole’ Southern grits. 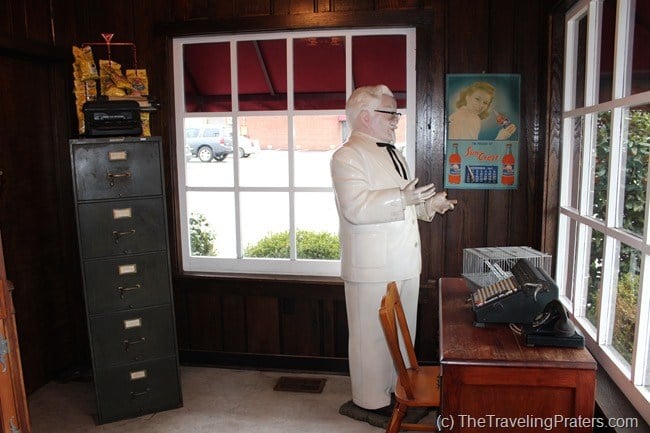 You’ll see Colonel Sanders office and a replica of one of the sleeping rooms that was part of the Sanders Motor Court. 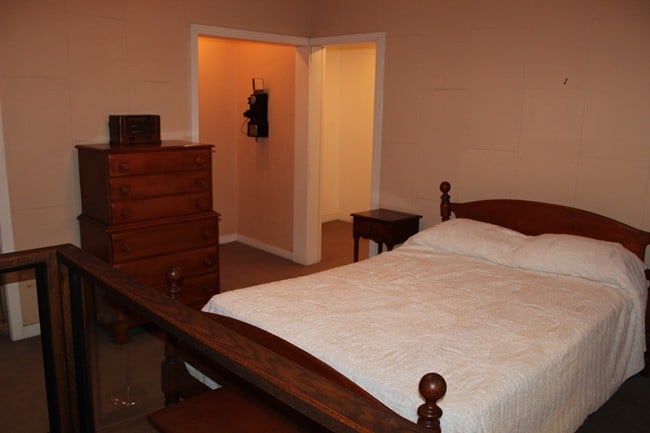 The sleeping room was actually part of the Colonel’s marketing strategy to encourage traveling guests of the cafe to rent a room in his Motor Court. Knowing that the lady of the house was the one to okay a room, he built a replica room in his dining room which contained the restroom for the cafe. 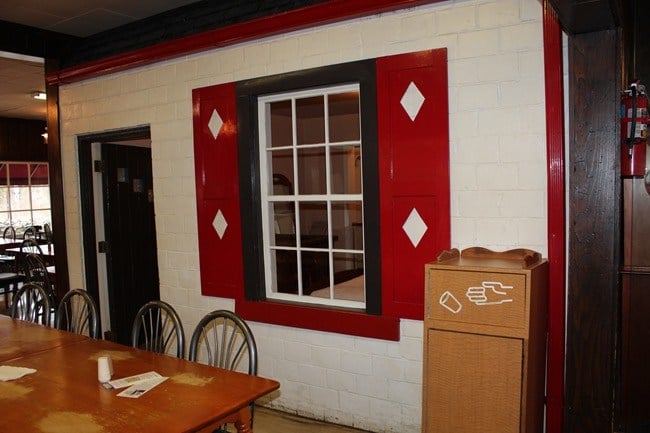 He hoped that as women passed through to the restroom, they would be impressed by the modern facility and encourage their husband’s to rent a room in his Motor Court. 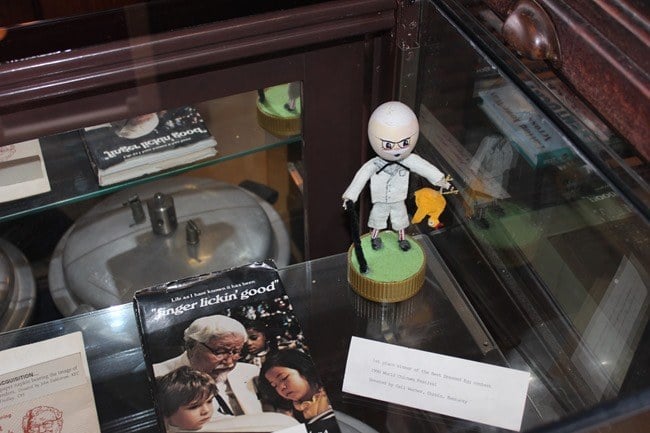 You’ll find more display cases inside the dining room which serves as the Colonel Sanders Museum. Filled with kitschy artifacts that are fun to look at, you’ll find a small selection of souvenirs are also sold at the food counter so you can prove to all your friends that you made the pilgrimage to the first KFC in Kentucky, “Home of the Original Recipe Chicken”.

You won’t be alone, judging from the varied license plates in the parking lot and the cameras I saw in use inside the building, this small roadside attraction draws a quite a number of visitors that are not locals. 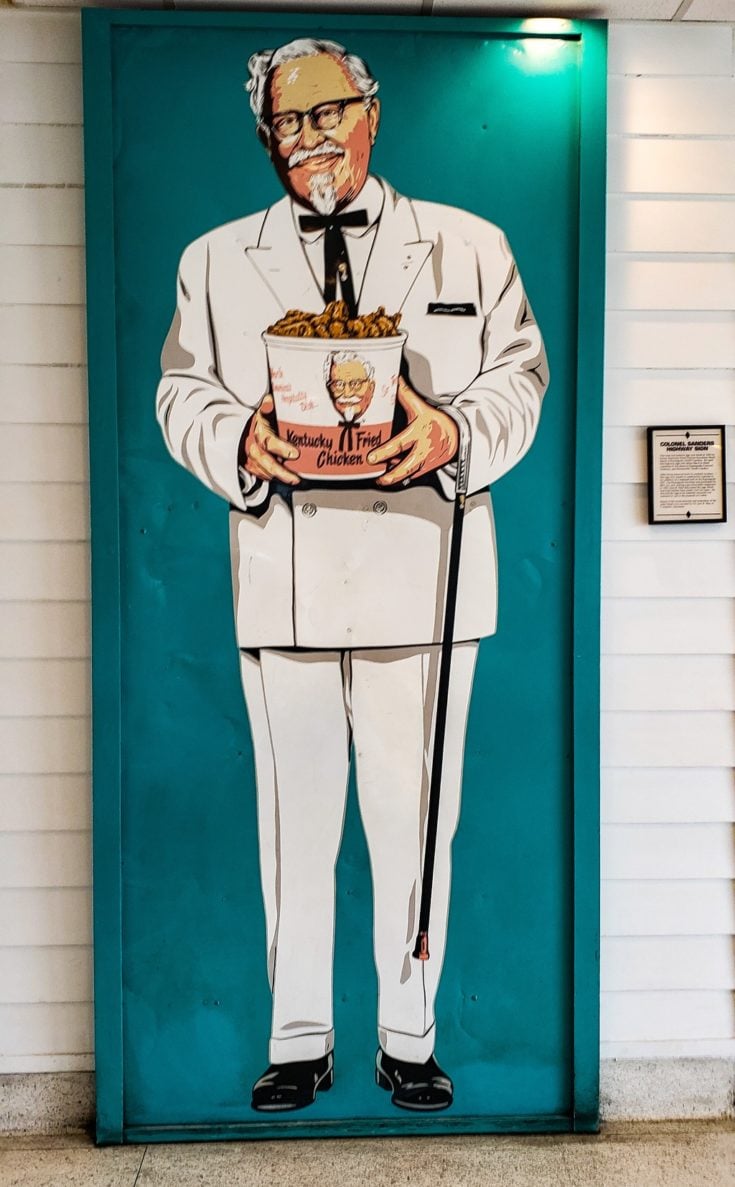 Do you need another reason to visit KFC in Kentucky? In my opinion, a perk for us northerners is that the southern states often have liver on the menu. That’s not something you see in Ohio!

When is the Best Time to Visit?

It’s important to note that this is a working restaurant and the museum aspect is woven throughout the dining room- it’s not a separate space. The best time to visit is during the slower hours, before or after lunch and the same for dinner. Though even during busier times you’ll find people up, walking around and viewing the displays. A meal purchase is not required and there is no charge to view the exhibits but if you have a chance to learn about the first ever KFC, wouldn’t you want to grab a bite to eat?

I think you already figured out how I answer that question.

Address: 688 U.S. Route 25W North Corbin, Kentucky
Driving Directions: Take exit 29 from I-75. Go south on 25E for one mile then right on 25W for 1/2 a mile. The restaurant is located on the right.
Phone: 606-528-2163
Harland Sanders Café and Museum Hours: Open daily, 10 a.m. to 9 p.m.
Group Tours can be arranged in advance.
Cost: Free
Want to learn more? Visit this website: http://colonelsanders.com/history_colonelSanders.asp

Interestingly, the original KFC is listed as a roadside attraction, one that is definitely worth a little detour and even my teens agree.
LOOKING FOR MORE ROADSIDE ATTRACTIONS? – Here are over 50 quirky spots to visit across the United States.

Are you a fan of Kentucky Fried Chicken? Would you ever consider stopping at this Corbin Kentucky KFC?

If you’re interested in more unique museums and attractions check out the Titanic Museum Branson (there’s also one on Pigeon Forge), The Troll Hole in Ohio, and The Billy Graham Library in Charlotte, North Carolina.

How much did entry to the museum cost? :)

The museum is free and integrated around the operational KFC that is there now.

Can someone pitch in their two cents as to what is the best time for visiting this place I.e when they make it fresh this is the best kfc I Ever had any where but eating at 8 from warmer was definitely not the same as around noon when I visited it the first time

I have very fond memories of cooking KFC chicken back in 1963 in Midland Ontario Canada while in high school . I remember the biscuits and packets of honey that used to be included in the buckets . I remember once the colonel was coming for an inspection and we the staff were pretty excited about his arrival ,unfortunately we were told later that his daughter made the visit instead of Harland..... I still like to put honey on my chicken . Planning to visit the museum in mid Feb on our way to Florida

Thanks so much for sharing your story, Don! I hope you enjoy the museum/restaurant. It has become a favorite stop for my family now.

Great post. You still look adorable in all your travel glory! :)

Adorable is not the word I would have used for that picture, Kerri. You crack me up.

I love this post. My Dad used to have a KFC. I met the colonel several times. Great post.

Wow- that is so cool that you were able to meet the Colonel! I remember watching him in the old KFC commercials on TV when I was younger. This was a fun stop and such a great way to stretch your legs and fuel your belly on a road trip.