The Joys of Geocaching

Thanks to Jessica Lippe for writing this guest post.  Jessica is a writer who has lived across the United States and currently resides in her birth state of Oregon. Read more about her everyday adventures at her new website, JessicaLippe.com.

Does going on a treasure hunt appeal to you? Then you may enjoy geocaching! Check out our beginner’s guide to geocaching to get started right away.” 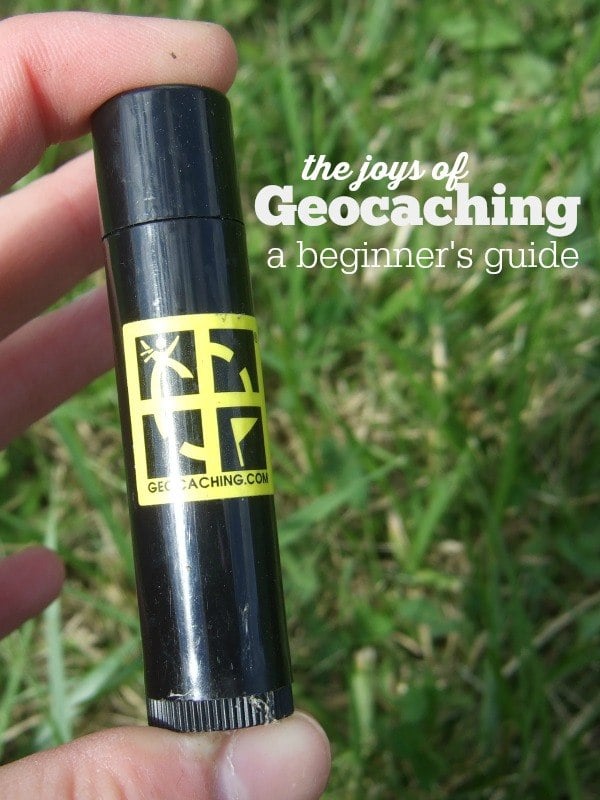 I once had a severe allergic reaction to an unknown plant at the beginning of a holiday weekend. Instead of traveling during my time off, I had to spend the rest of that long weekend swallowing Benedryl whenever I was conscious enough to do so.

On another occasion, I was walking around a park when I realized that a police car was following me! The cop rolled down his window and asked if I was okay. Apparently he received a call that there was a suspicious person in the park who matched my description!

These are just two of the many stories I get to tell thanks to geocaching.

And no, most of the time, geocaching doesn’t involve law enforcement or swollen extremities! Instead, it is an exciting (and usually safe!) outdoor activity that individuals, couples, families, and anyone of any age can enjoy!

So what is geocaching, anyway?

I get asked that question quite a bit, and I describe it as being “like a worldwide treasure hunt for grown-ups!”

Anyone in the world can hide a weatherproof container in a publicly accessible area, and then post the GPS coordinates of that container, or geocache, online at a website such as geocaching.com. Members of that site can then retrieve those coordinates and possibly a few clues.

After plugging those coordinates into any GPS device (or simply navigating on your smartphone), they can then take themselves, their friends, their families, and even their dogs to hunt for the geocache! It’s the ultimate combination of the outdoors and technology. 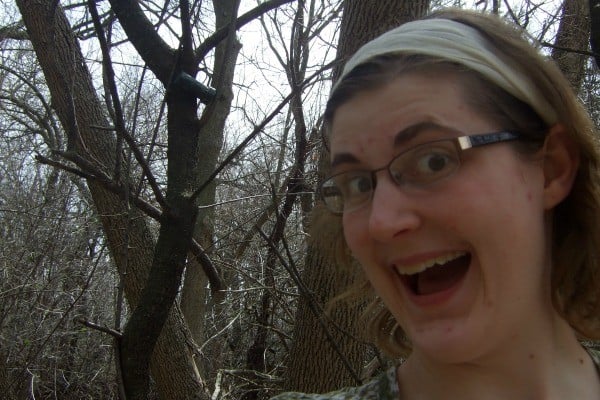 The first geocache I ever found was a camouflaged pill bottle hanging from a tree in a natural park near Fremont, Nebraska.

I decided to hunt for this geocache because I wanted to do something fun and adventurous, but at the time I could not afford to travel outside of town.

Since then, I’ve located dozens of geocaches in every state I’ve lived in, and many of the places I’ve visited. No two geocaches are alike!

I’ve found several tiny, magnetic geocaches that just look like manufacturer’s defects on signs and park benches. All that fits inside of these is a small strip of paper to sign your name.

I do prefer the larger ones, such as ammo cans, because they’re filled with all kinds of trinkets that others have left, and you can take one of them in exchange for something you brought along. 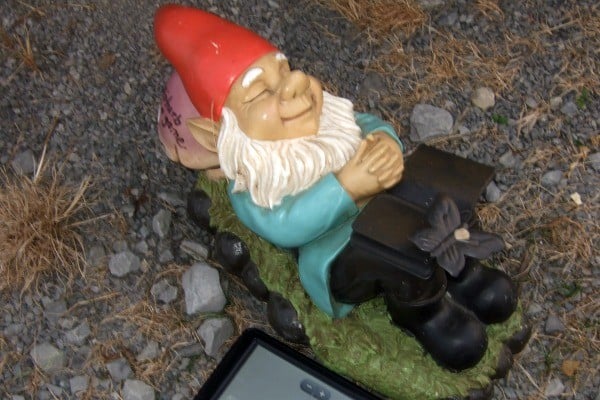 Geocaches can add adventure to your day even when you’re at home.

You may be surprised to find several geocaches within just a few miles of your home. Geocaching can also enrich your travel experiences, too.

When I visited the Cardinal Center in Marengo, Ohio, there were several lawn gnomes throughout the campground. Only upon turning them upside-down would anyone realize that they were actually geocaches!

I once found an EarthCache (a geocache that, instead of having a physical cache, takes you to an interesting place) at Niagara Falls that showed me a large rock which was originally on the Canadian side, but because of glacial movement it ended up on the American side during the Ice Age! If it wasn’t for geocaching, I would have just thought it was another boulder along the trail. 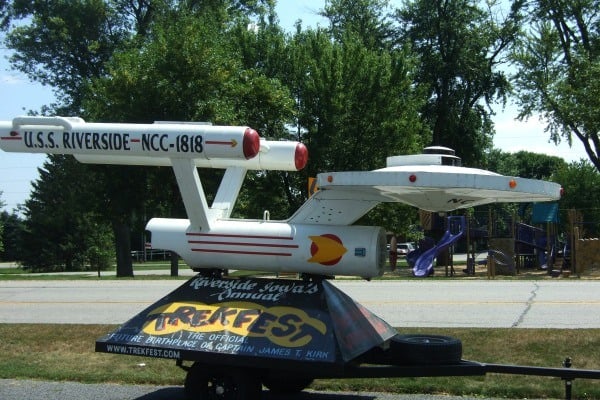 When I went to Riverside, Iowa to see the” future birthplace” of Star Trek’s Captain Kirk, I discovered that the area had a multi-cache. That meant that, before I could even get the cache coordinates, I had to run around town and get numbers off of the USS Riverside statue and the birthplace memorial stone. I was then given math problems with all those numbers. The answers were the geocache coordinates!

If you get your kids involved, geocaching can be a fun way for them to practice a variety of school subjects, such as geography, math, history, science, and reading.

If you have never gone geocaching before, I encourage you to download the app and create an account at Geocaching.com and find some caches that are close by.

Tips to Help You Get Started Geocaching

1. If you can, find someone who has experience geocaching and ask to go with them. I personally love to introduce people to the joys of geocaching, and oftentimes, the newcomers find the geocaches before I do! 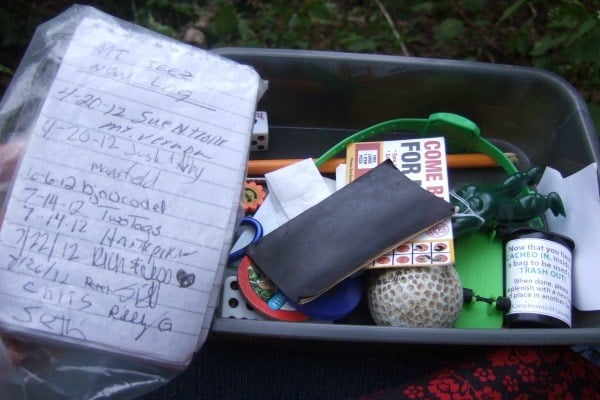 2. Each geocache has two different ratings: one for the difficulty of finding it, and one for the type of terrain. Beginners should start out with one-to-two star difficulty ratings to get a feel for how geocaches are hidden. If anyone in your group has physical disabilities, you can stick with the low-rated terrain geocaches.

3. While your smartphone or GPS should take you as close as possible to the correct latitude and longitude, remember that this is a three-dimensional search. Very rarely are geocaches at eye level. They are either high in a tree or structure or low on the ground or under something. However, it is against the rules to bury geocaches, so there’s no need to bring a shovel.

4. Look for things out of the ordinary. Is there a screw that’s in a strange place? It could be a geocache. Large geocaches in the woods are often hidden by being covered with a pile of bark. Some people make geocaches that look like other objects, such as birdhouses, logs, or even animal droppings, so these can be extra difficult!

5. Always bring a pencil, pen, or marker. Every geocache should have a log book, but the smaller ones do not have room for a writing device. Signing your name proves that you actually found it. 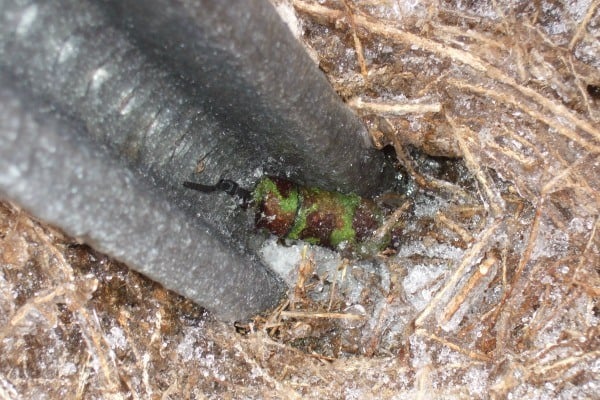 6. Also bring a camera. There are some reasons that you can sometimes not sign the logbook, such as if it’s full or wet. I once visited Northern Kentucky when an ice storm hit. The geocache I found was sealed shut with a thick layer of ice! Of course, it’s a good idea to take pictures of your geocaching team for the memories as well.

7. There are a few other tools you may need from time to time, such as tweezers, a ladder, or possibly high adventure gear. These sort of tools should be noted in the geocache’s description, so read it carefully!

8. Many geocaches, especially the larger ones, have small toys and other items for trading. This is a great way to score free souvenirs, but make sure to do it right.

First, always bring a trinket of equal or greater value to swap with. There’s little that’s more disappointing than a cache full of nothing but business cards and expired coupons.

Also, for safety, make sure anything you place in a geocache is family-friendly and does not contain food or medication. 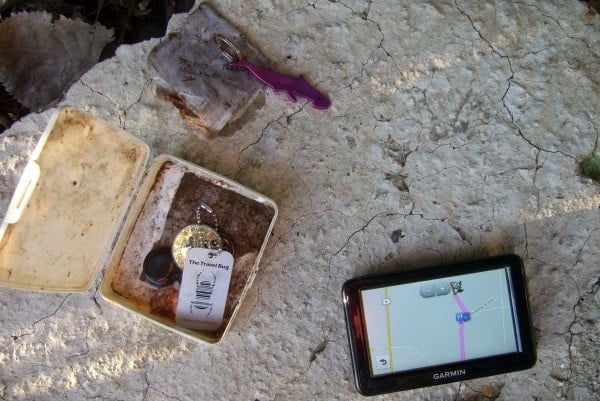 9. There are special souvenirs in some geocaches with names like Travel Bug or Tech Tag. Each of these has a unique tracking number and a travel goal. If you look up the tracking number online, you can learn about who the tag belongs to and where it has been so far.

These souvenirs can be fun to participate in, but only take them if you plan to put them in another geocache that will get them closer to their intended destination.

10. After finding a few different geocaches, you may be inspired to create one of your own. There are specific rules you have to follow, but this can be a fun way to bring people to your area and introduce your neighbors to the joys of geocaching!

Have you ever gone geocaching? What was your favorite find?