Did you know there are several Pete Nelson treehouses in Ohio that you can rent for overnight stays? How fun would it be to stay in one of these masterpieces? 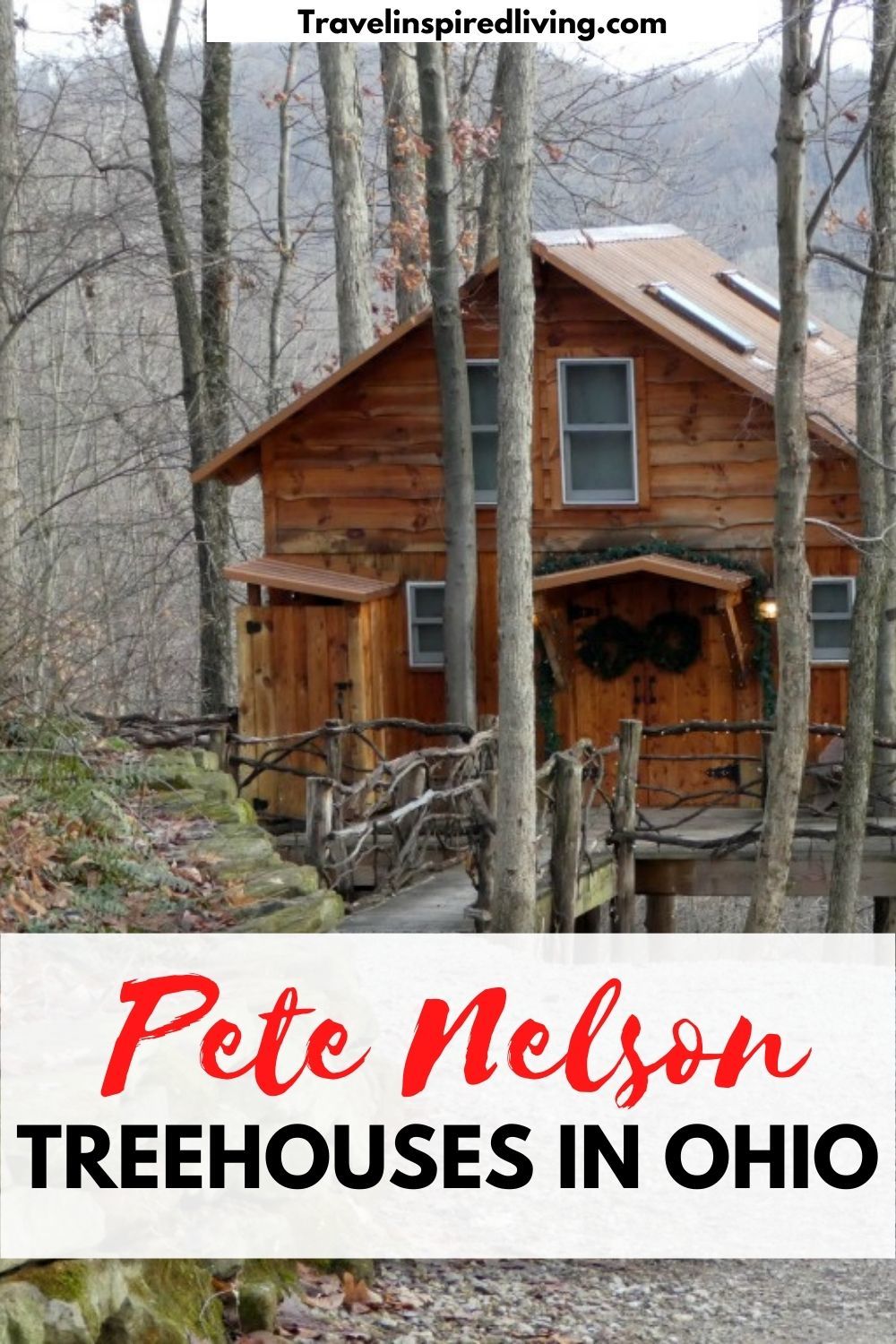 When we’re not van camping, my other favorite way to travel is to explore unique places to stay in Ohio and beyond. This has included treehouses, train cars, castles, and Scottish crofts.

Treehouses are some of my favorite types of places to stay; it’s usually a fun glamping experience that puts you close to nature without all the hassle of camping. We’ve had a lot of fun treehouse getaways in Ohio, including several Pete Nelson treehouse rentals in Ohio. These spots are definitely worth checking out, and they make for a perfect socially-distanced getaway with your loved ones.

Who is Pete Nelson?

If you’re wondering who Pete Nelson is, then I’m guessing you’re not obsessed with the Animal Planet TV show Treehouse Masters. Pete is a treehouse builder who rose to prominence thanks to the TV series highlighting his creations. He has taken the idea of a backyard treehouse and turned them into stunning homes around the U.S.

In Washington State, his family opened a bed and breakfast made up entirely of treehouses, and later founded the family business which designs and builds treehouses.

You can find Pete Nelson treehouses in botanical gardens, zoos, summer camps, corporate or non-profit organizations, and even nightly rentals!

There are several places where you can see, or stay in, a Pete Nelson Treehouse in Ohio. Whether you live in Ohio or plan to visit soon, save this post so you can stay in a Pete Nelson treehouse on your next Ohio weekend getaway!

The newest treehouse rentals in Ohio are part of a large project by the Metroparks Toledo Foundation. The village opened in 2020 and is the largest publicly-owned treehouse rental site in the United States.

For an overnight stay, you can choose from four treehouses that sleep anywhere from two to six people. There are also platforms where you can set up a tent or hammock and sleep outdoors in the trees. Finally, there is a huge “common area” treehouse that can seat up to 49 people.

In an effort to give back to the community, certain nights are set aside for community programming, camps, and subsidized stays. Others may rent an individual treehouse for an overnight stay or rent the common treehouse for day use. On four special weekends a year, the entire village can be rented out. Imagine what a fun family reunion spot this would be!

White Oak Treehouse at the Mohicans 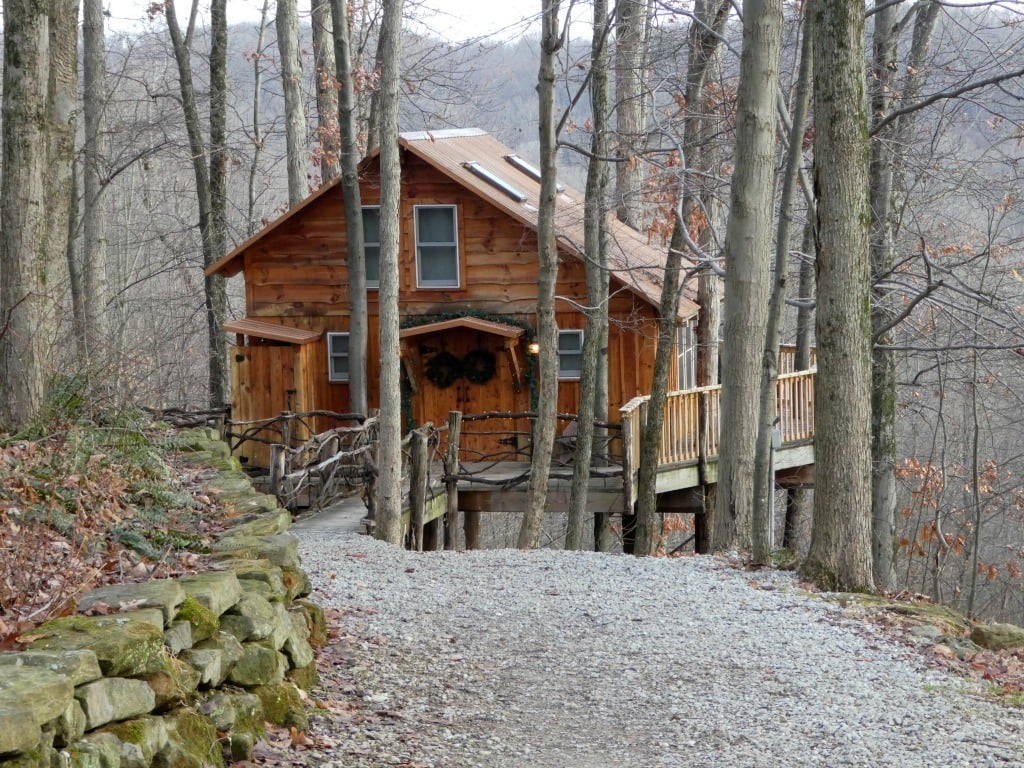 The first Pete Nelson treehouse rental in Ohio is located at one of our favorite spots, the Mohicans. The Mohicans is a resort property on the edge of the Mohicans Wilderness in Central Ohio. Construction of the White Oak Treehouse began in 2012 in conjunction with Pete Nelson. The success of this project quickly led to the idea to create an entire tree house village at the Mohicans.

Take a peek inside:

The White Oak Treehouse is quite the glamping destination. With two bedrooms, a full bath, outdoor shower, fully-equipped kitchen, and spacious living room, this can hardly be considered “roughing it.” The interior looks like an upscale log cabin, while the outside deck and it’s four-top table is the perfect place for dining in the trees. You can sleep up to six people in three queen beds at this Pete Nelson-designed Ohio treehouse.

Little Red Treehouse at the Mohicans 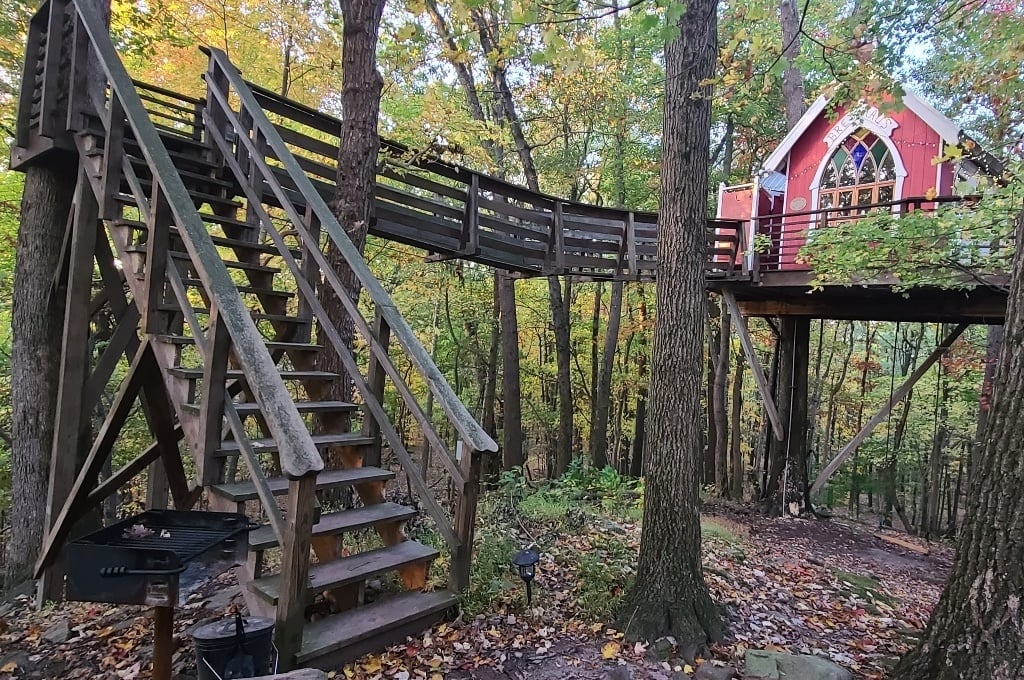 Quickly following the success of the White Oak Treehouse, the Mohicans again partnered with Pete Nelson to build a second treehouse rental. Using a local Amish crew in conjunction with the Nelson team, this treehouse rental was built in 2013 and featured in an episode of Treehouse Masters. It was originally created as the Treehouse Brewery but quickly repurposed into an overnight rental.

Take a peek inside:

My husband and I stayed the night in the Little Red Treehouse and we were instantly hooked on treehouse glamping in Ohio! This cozy treehouse rental has a queen-sized bed in a loft with ladder access. Staying in this treehouse is closer to camping or glamping, as there’s just an indoor toilet, but the shower is outdoors and only open in the warmer months. It does come with a kitchenette, charcoal grill and a DVD player. If you are looking for an affordable romantic getaway, a stay at the Little Red Treehouse at the Mohicans is the perfect spot!

Glamping in Ohio: Checking out The Mohicans Treehouse Village

10 Things to Pack for a Treehouse Getaway

Have you seen any of these treehouses?