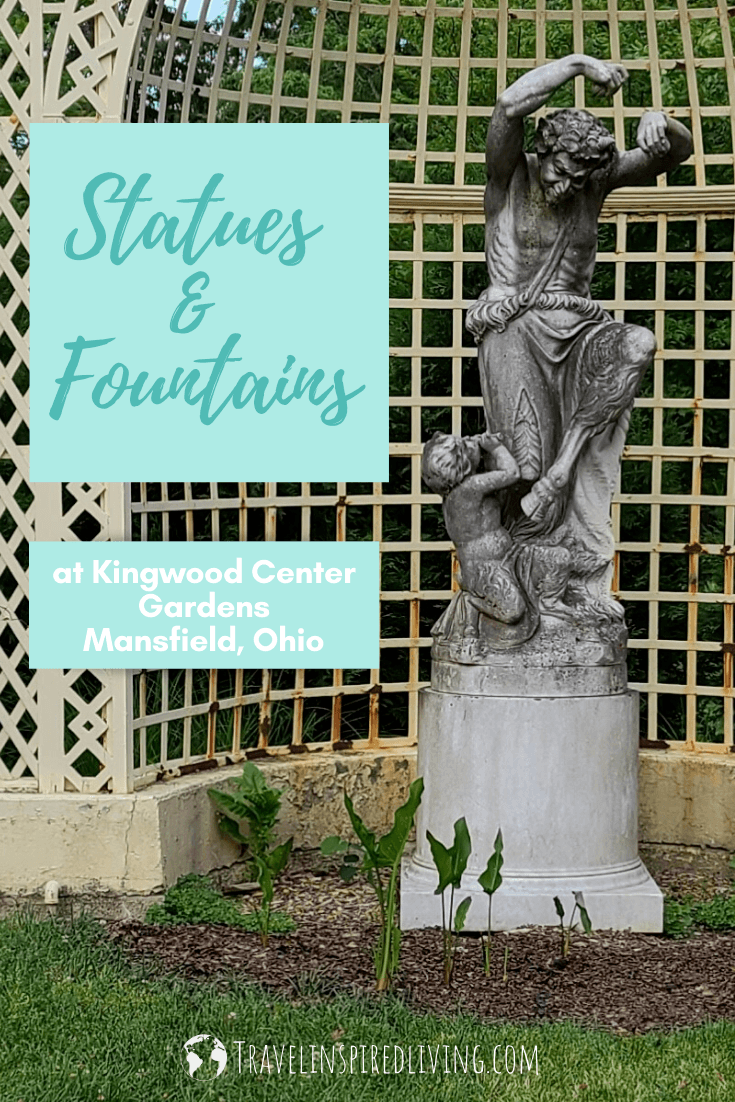 I’m not going to lie. Kingwood Center Gardens is one of my favorite places to visit in Mansfield and has been for years. When our kids were small, my husband and I visited often. As adults, they continue to visit on their own and now, my husband and I visit without them and with the grandbaby, especially during Christmas at Kingwood.

Kingwood Center Gardens has changed and evolved since our first visit many years ago and I’m excited by the changes that will be unveiled in the coming weeks and months. Improvements to the Carriage House, a new StoryBook Trail and a gorgeous Visitor Center that will debut soon.

Recently, my oldest son and I visited the garden for a tour of the statues and fountains that are currently on the grounds. Additional statues will be added with the opening of the Visitor Center so you’ll want to visit often and keep an eye out for new additions to the property.

Of the statues and fountains that are currently seen at Kingwood, 12 are original. By original, it means they were on the grounds at the time that Mr. King inhabited Kingwood Hall. I’d love for you to see all of them for yourself so I’ve created a Statues and Fountains scavenger hunt that you can print out and take with you on your next visit.

Our tour of the grounds began at the Linden Road entrance where we headed to the small gazebo to see the shell fountain beneath the structure. The gazebo area is a popular spot for intimate weddings.

Next door to the gazebo is the herb garden where you’ll find Lucy and Lucifer, two stone rabbits that seem to appear in a different location each season. I can’t say I love the names.

You’ll have to look closely in the Courtyard near the greenhouse if you’re going to spot the next sculpture. The Peacock was made by NECIC during their summer manufacturing camp in 2019 in an effort to teach sixth to eighth-grade-age kids about the manufacturing process. The Peacock was silver when placed at Kingwood.

Originally, the sculpture rested outside Kingwood Hall but has since been relocated and may be moved yet again. Over the past year, the metal has developed a rusty patina that gives it an aged look and allows it to blend in more with its surroundings.

You’ll also find a set of three mushrooms near the large fountain that connects the terrace with the formal gardens. Not much is known about the mushrooms other than they were donated by a private donor.

Though the fountain looks like it could have been in place in the 1920s, it wasn’t built and installed until the 1990s. The base is original to the ’90s while the fountain itself has been replaced.

It looks like it’s made as stone but it is actually made of a manufactured material. Grab a seat on one of the nearby benches and enjoy the sounds of the trickling water running down the base of the fountain.

As you enter the courtyard of Kingwood Hall, you’ll find urns placed atop the brick wall entrances. The urn is a popular motif you’ll find repeated at Kingwood and on the mansion itself, just take a peek at the front of the property.

Flanking the steps to the home, you’ll find a male and female, shepherd and shepherdess statues. These are believed to be the oldest statues at Kingwood and were selected by Clarence Mack, the architect, to match the French Provincial and European feel of the property.

You’ll find similar style pieces at the back of the residence, along with more urns. These pieces were also more than likely selected by Mack.

Located on the terraced formal gardens you’ll find some of my favorite sculptures. Tucked amid the evergreen hedges pruned to look like walls, you’ll find Lady Of Gaillardia. Little is known about the sculptor other than it was commissioned from sculptor Anton Vozech, who believe it or not was from Ohio. He used three models to create the nude figure.

My personal favorite statue at Kingwood is the Pan sculpture, the half-man, half-goat which is located directly up the steps from the Lady of Gaillardia. In ancient Greek, Pan is believed to be the god of the wild (shepherds and flocks), rustic music, and fertility.

If you look closely, you’ll see a shell-shaped fountain at the bottom of the steps that lead to the Pan sculpture. Though not an exact match, it does compliment the shell fountain at the gazebo across the park.

The final statue is a Satyr- also half-man, half-goat who is believed to be the companion of Pan, the god of fertility, and Dionysus, the god of wine and ecstasy. The Satyr is often associated with imbibing in wine, music, dance, and women.

Sadly, there is not much known about the majority of the statues and fountains on the property. Unlike our current age where everything is meticulously documented, a half-century ago that was not the case.

The Statues and Fountains Tour is offered once a year for a limited number of guests. While it is inexpensive at the current price of $10 per person, if you opt to support Kingwood Center as a member you can shave 50% off the ticketed price and the money still goes to support ongoing projects at the gardens.

You can read more about some of the garden sculptures at Kingwood in this post from their website.

Don’t forget to download my free Statues & Fountains scavenger hunt printable before your visit so you can find the outdoor art pieces on display.