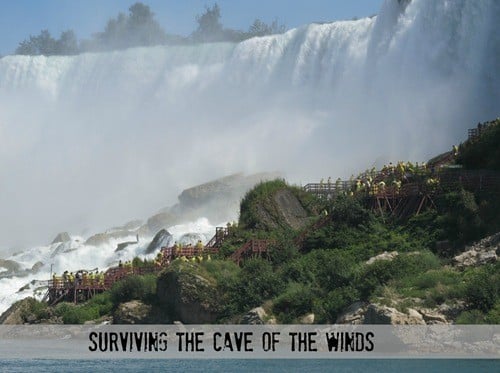 The last time my husband and I had traveled to Niagara Falls with any of our children, our oldest son wasn’t yet a year old and spent the day strapped to my husbands’ back in a baby carrier.

Did I happen to mention that Nickolaus turned 19 in July? Yep. He’s grown quite a bit since this picture was taken. 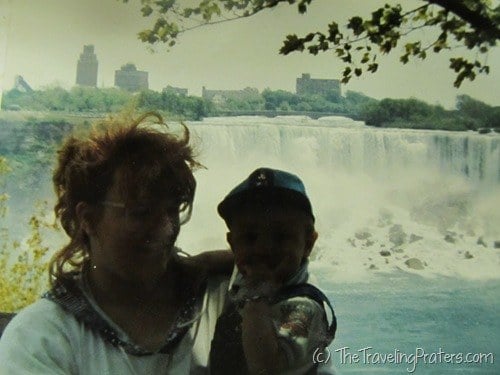 We spent that early summer day in 1994 viewing the falls and walking through Niagara Falls State Park and over the bridge to Canada until our feet hurt. One thing we didn’t do was take the Cave of the Winds tour because children had to be able to walk on their own. That rule still applies.

Fast forward nearly 20 years to our spur of the moment weekend trip, and the Cave of the Winds attraction was at the top of our list. 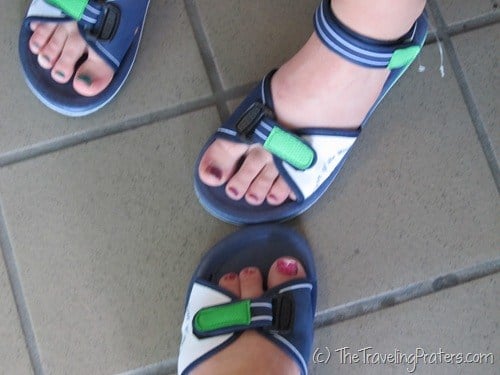 Cave of the Winds is located at the base of Goat Island. To get there we donned our complimentary souvenir sandals and ponchos, and descended a distance of 174 feet by elevator into the gorge while listening to the elevator operator give us some brief history about how the elevator shaft was constructed.

It took many men two years to dig through the rock to create the tunnel shaft in 1924. The rock that was removed from the ground was used to construct the buildings that house the elevators today. 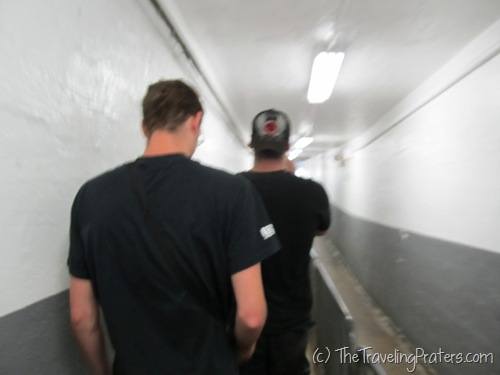 Are ride was over in a moment and we stepped from the elevators and walked through a tunnel that led us to a paved walkway which provided a short path to the boardwalk. Along the way we were able to look behind us to catch a glimpse of the Horseshoe Falls and many people stopped and posed for pictures. 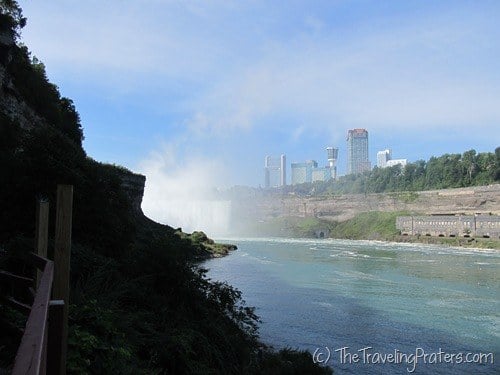 The brief information on the elevator ride into the gorge and the return trip to the top of the falls, is about all you get as far as a tour guide goes. You’re pretty much on your own. Honestly, this was a good thing. I can’t imagine what it would be like to try to hear a speaker over the roar of the water fall on the hurricane deck! 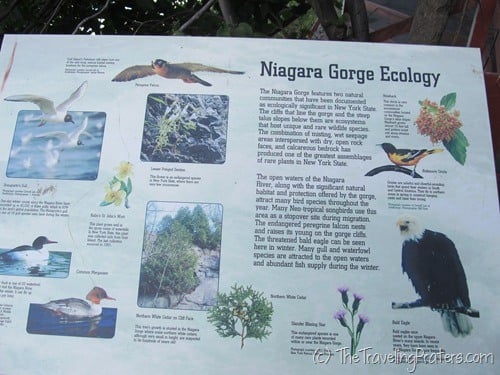 You will find a number of informative signs along the trail that offer additional facts about the ecology and formation of the gorge and history of the falls. 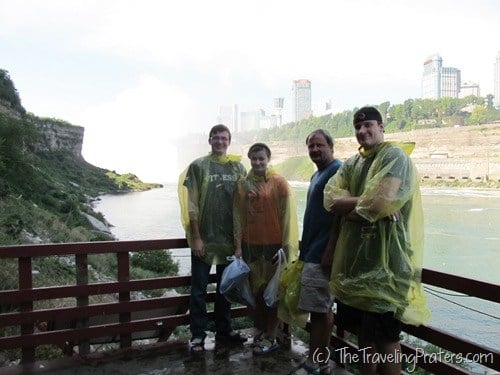 Contrary to its name, Cave of the Winds is not an actual cave. I hadn’t realized that though it was once a cavern that did actually look out from behind the falls, due to safety issues and falling rock caused by years of erosion, the original ‘cave’ was destroyed by dynamite in the 1950’s. 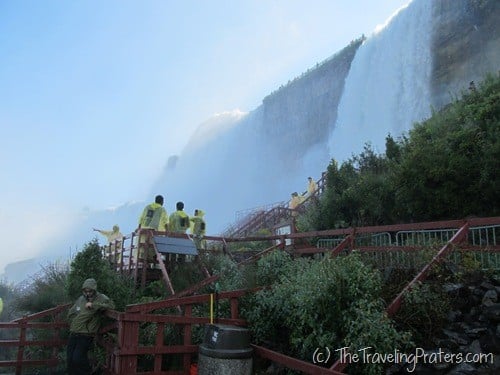 I can’t say that we were too disappointed. The hurricane deck is the closest that we’re likely to ever want to be to a waterfall. 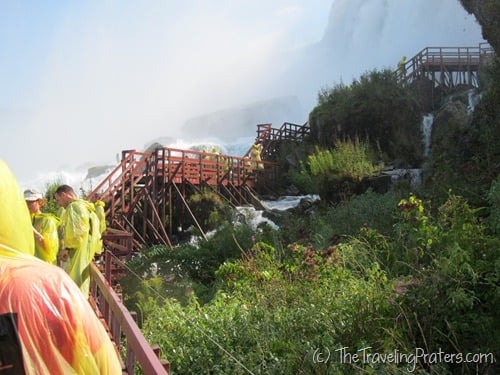 You’ll leave with an appreciation for the power of the Falls. You are welcome to linger along the boardwalk as long as you like but unless you really enjoy getting soaked from the spray, you’ll probably move through it rather quickly. We probably spent little more than a half hour and that includes reading signs and stopping to take a few pictures. 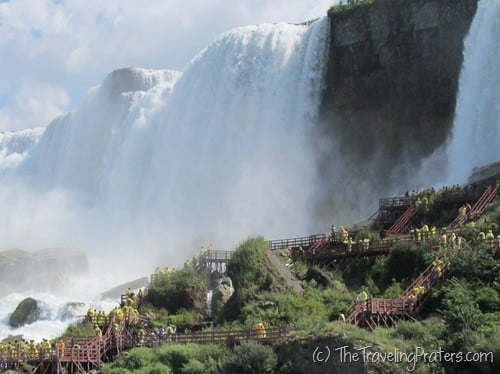 The view was beautiful and Cave of the Winds is certainly an experience that my entire family wholeheartedly recommends. 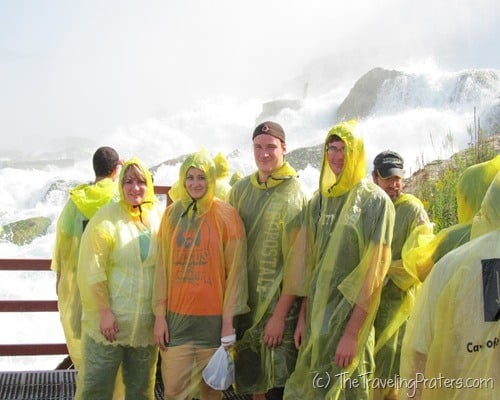 My post, A few Tips to Enjoying a Niagara Falls Vacation, offers some pointers when it comes to surviving the Cave of the Winds. I’ll reiterate once more to arrive early. This is a very popular tourist attraction and though it wasn’t overly crowded when we arrived, keep in mind that there were plenty of people and we were there right at as the attraction opened.

And for female visitors, this is not the place to wear a cute summer dress or loose fitting clothes. Let’s just say that the wind really kicks up the closer you get to the Falls.

And for those interested in experiencing a virtual trip to the Falls, here’s a short video that I recorded from the top of the Bridal Veil/Luna Falls.

Have you been to Niagara Falls? What did you enjoy most?

This post is linked to Travel Photo Thursday with Budget Travelers Sandbox be sure to stop by for ideas of where to plan your next getaway!

I love the Falls. Probably has something to do with me being a Canadian :) I have been twice, and both times to the Canadian side. Loved it. My only regret is not going on the Maid of the Mist either time. I was with people who weren't interested. I'm not sure why I didn't go on my own...next time!

I've been to Niagara Falls twice, but not to the American side since I was very young. On the Canadian side you can get up close to the falls from below, too. Such a gorgeous natural wonder.

Mary @ The World Is A Book

Great video and with a rainbow bonus too. We love Niagara Falls! We saw this tour while on the Maid of the Mist boat and they seemed to be having more fun. From your pictures and experience, we really need to do this tour next time. How awesome to be that close to the powerful waterfalls.

Love the rainbow in your video. I visited Niagara Falls back in the 70s -- boy, that was a lifetime ago! We didn't get as close and didn't need ponchos or closed shoes. Will keep those in mind for my next trip.

So it seems those ponchos are well worth it?! hehe! looks like a great day!

The ponchos and sandals are provided by the Cave of the Winds - I added the word "complimentary" to my post so readers don't think that was extra. The state park provides them because they definitely are needed! Even with the ponchos, we got wet. The wind in the gorge and coming off the falls can reach speeds over 60 mph so you certainly feel "the mist" of the water. :)