The Cave of the Winds wasn’t the only attraction that we enjoyed on our getaway to Niagara Falls. There was another attraction we were eager to visit, the Maid of the Mist. 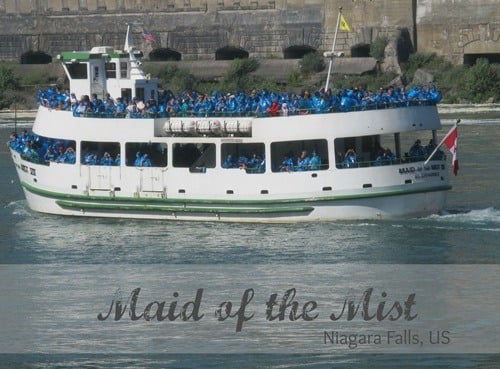 The Maid of the Mist operates from both sides of the border and was originally a ferry service to take people back and forth between the US and Canada. When the ferry service was no longer needed due to better bridges spanning the gorge, the idea to act as a tourist vessel was formed in the mid-1800’s. 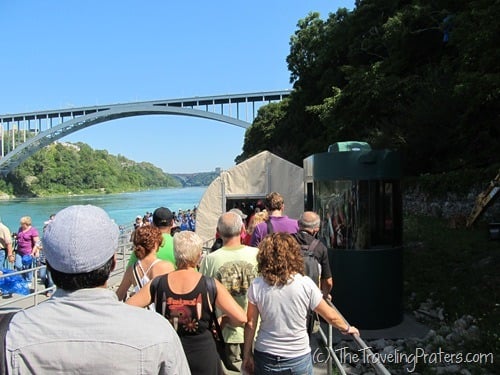 The Maid of the Mist was included in the Discovery Passes that we had purchased for our spur of the moment weekend road trip.  The pass allows access to five popular attractions and unlimited one day trolley rides for a low, per person charge.

Access for the Maid of the Mist is at the Observation Tower where visitors are crammed into an elevator and lowered into the gorge. There you are handed a free souvenir raincoat- which you do not want to put on until you are ready to board the boat. While waiting you’re pretty much in full sun. Imagine wearing a plastic garbage bag in the middle of summer and you’ll pretty much understand why you don’t want to put your poncho on sooner than needed. 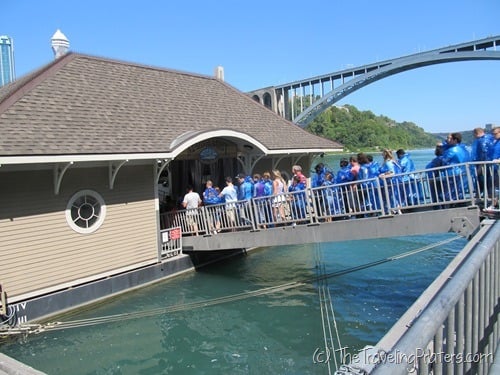 The boats look extremely crowded but I was pleasantly surprised to find that it wasn’t uncomfortable once you boarded. Children of all ages are permitted on the boat, though the mothers with young babies in strollers seemed to spend more time trying to keep their little ones from getting wet than they did watching the scenery.

Since the majority of visitors to Maid of the Mist climbed upstairs for the best view and we were at the end of the line, we opted to stand at the rear of the boat. We were able to look downriver for a beautiful view of the Rainbow Bridge which houses Rainbow Tower home of the carillon that we heard chime during our visit. 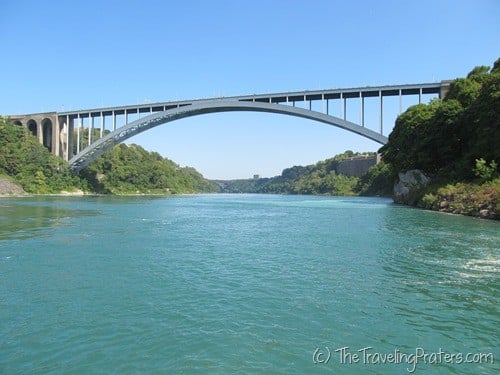 The boat ride also offered an incredible view of the Cave of the Winds attraction and both American Falls, the Luna and Bridal Veil Falls. 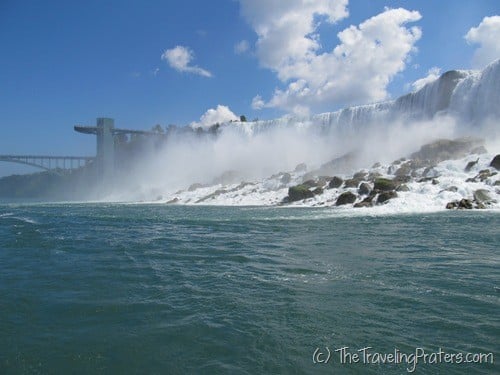 My kids cracked up when we got on board and saw our emergency escape hatch. I said a quick prayer that it wouldn’t be needed. I don’t know why, but boats always make me just a wee bit apprehensive. 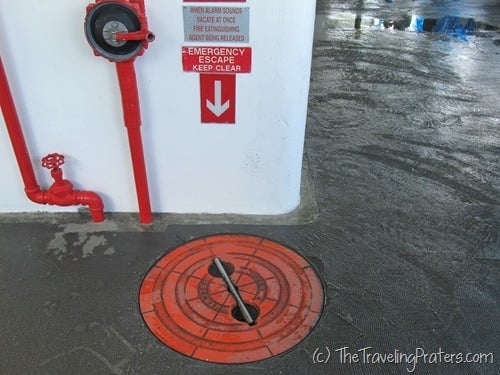 The boat ride was narrated but we couldn’t hear what was said. I don’t know if this was due to where we had chosen to stand or if it is generally difficult to hear over the noise of the engines and roar of the waterfall.

As we approached the world famous Canadian or Horseshoe Falls, the water began churning, the wind kicked up and we felt a steady spray of water. It was difficult to get a picture of the view due to the spray and because much of the falls is shrouded in mist.

I did manage to get a picture as the boat turned and we headed back to dock. Though we weren’t able to see much as we had approached the falls, we certainly had an excellent view as the boat retreated. And we didn’t have to fight with any crowds to do so. 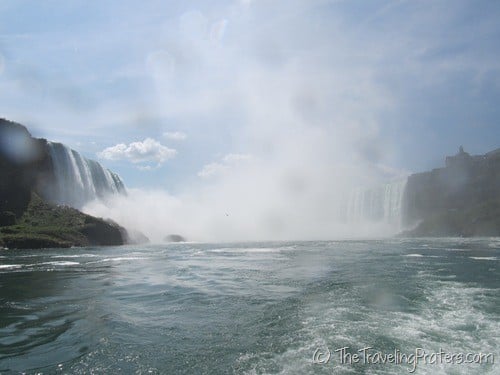 I tried pretty unsuccessfully to get a picture of my family in front of the falls. 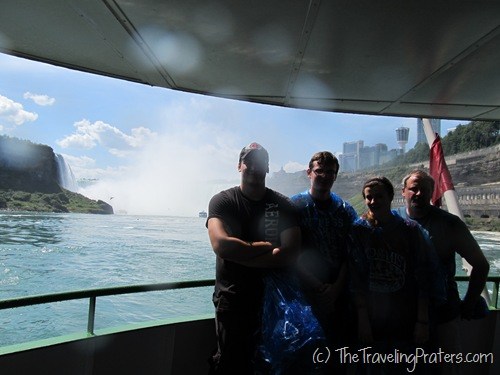 The boats run constantly during operating hours so as we pulled away from the falls, another boat was waiting to take our place. 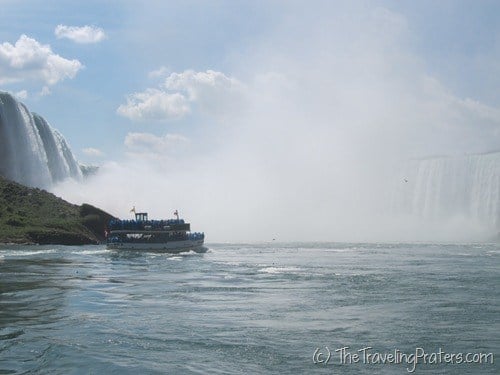 When we exited the boat, we were transported back to the top of the gorge via the elevator to the observation deck which offered an amazing view. 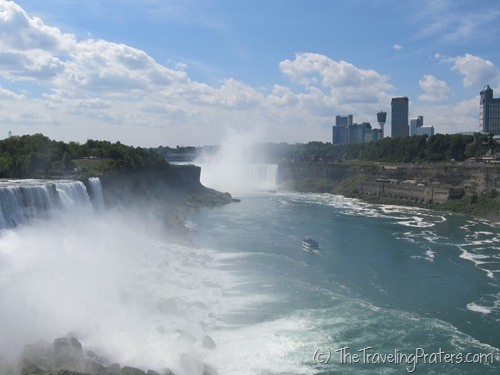 We enjoyed the Maid of the Mist and were glad to have had the experience. It was amazing to feel the power of the falls in the churning water but if we HAD to choose only one attraction, Cave of the Winds had our vote.

If you have a passport, I believe the best view of the Horseshoe Falls is on the Canadian side, otherwise I’d suggest a trip to the Observation Tower or a quick stop by the Top of the Rock Restaurant on Goat Island.

Have you ridden on the Maid of the Mist? How did you like it?

This post is linked to Photo Friday with Delicious Baby and Friday Daydreamin’ with R We There Yet, Mom?

What a cool experience, especially for the kids (and the kids at heart)! I'll have to put the Maid of the Mist on my list for my next trip to Toronto. Thanks for sharing your family's experience. Glad you were able to take those beautiful photos.

We visited the falls from the US side many years ago but we chose not to do the Maid of the Mist tour! I was under the impression that the US side was the preferred place to see the falls. Wherever you were, the view is spectacular.

This is coming up for us in the next week! I am so excited and I am doubly excited that we will get to ride on the historic Maid of the Mist. Thanks for the tour.

I thought I had heard Maid of the Mist was no longer aloud to operate any longer due to loss of contract.

Yes and no. They lost a bid on the Canadian side but will operate for another year or so. They will hopefully remain to operate in New York but that is also unclear because they also lost their winter storage which is also on the Canadian side. Hopefully they can find a solution. It would be a shame to see them replaced.

Wow- what a cool experience - I would love to see Niagara Falls one day! Thanks for linking up with us!

The Falls is beautiful. One of my favorite anniversaries was the one my husband and I spent in a room overlooking the falls. Absolutely gorgeous. At night it's lit up and on certain nights they have fireworks over the Falls too.