When it comes to visiting Boston, Massachusetts, it’s easy to get overwhelmed by all the options. Our new guest contributor, Julie DenOuden, recently visited the city and has put together this easy to follow, walkable itinerary of how to spend three days in Boston. 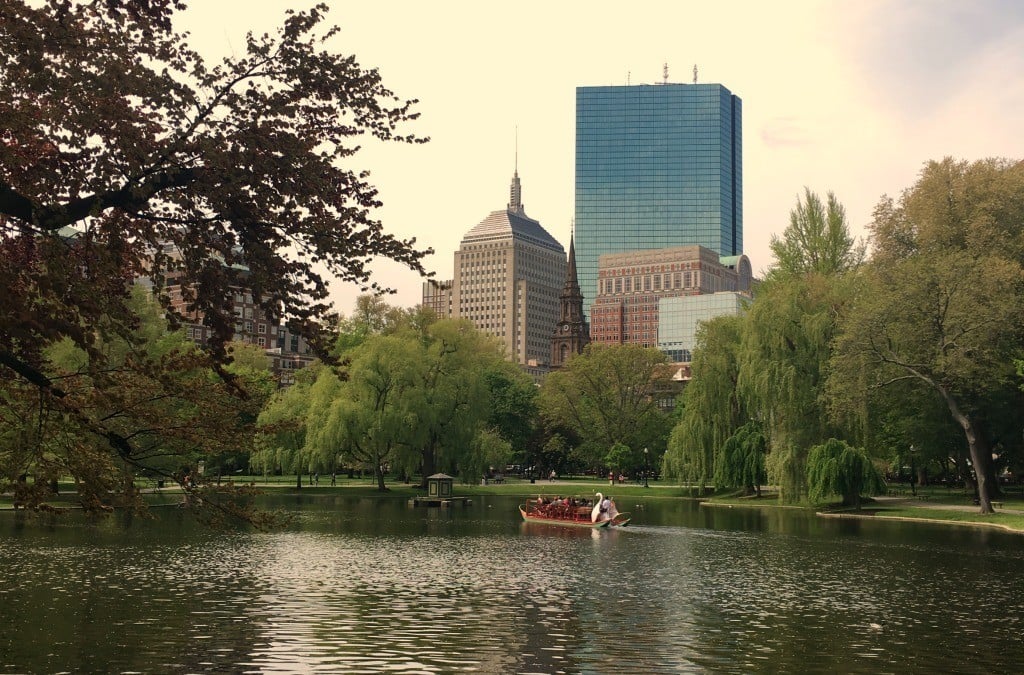 I absolutely love history and since at almost 400 years old Boston, Massachusetts is one of the oldest cities in the United States I couldn’t pass up the opportunity to spend three days exploring Boston! Boston is a city filled with American firsts including the first college (1636, we’ll visit on day one!), first public park (1634, where we’ll head on day two!), first lighthouse (1716), first World Series (1903), and so many more American firsts!

When I travel I love exploring new places on foot so when I discovered that according to U.S. Census Bureau data, just over 15% of Bostonians walk to work (the highest percentage among the major U.S. cities) I got excited! As you are planning your trip to Beantown, be prepared to lace up your walking shoes to make the most of your three days in this city. 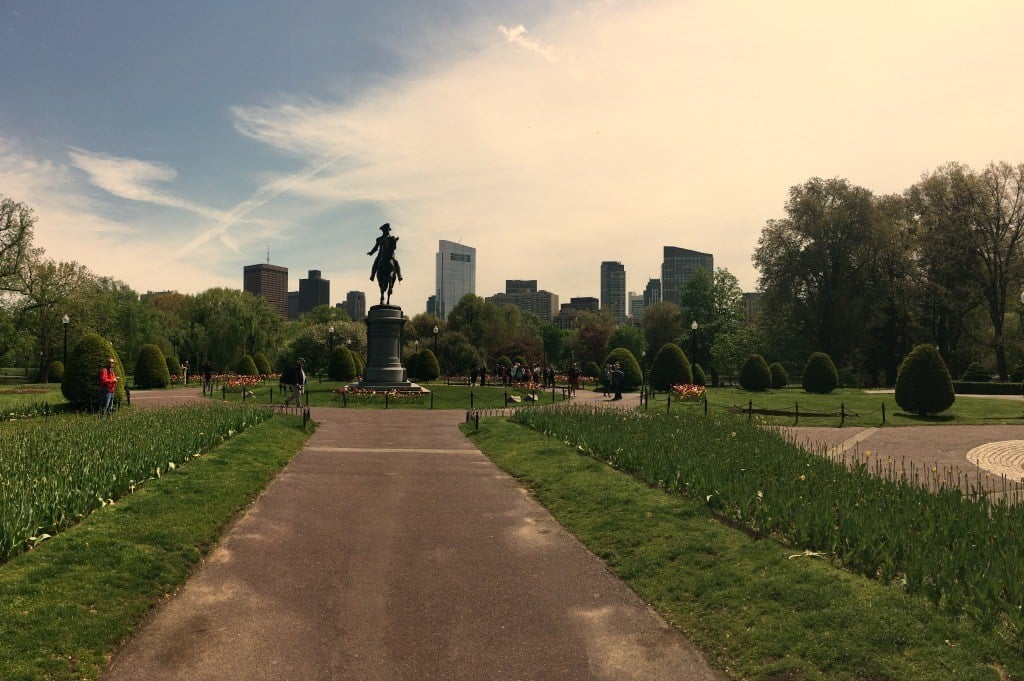 Day One in Boston – Explore Cambridge

On our first day in Boston we’re going to cross the Charles River and head to Cambridge. As I wandered through the streets of Cambridge I couldn’t help but think that everyone I met along the way was probably a genius…because who else studies at Harvard and MIT?!? Rather than take a tour of Harvard I’d recommend downloading a scavenger hunt from Big City Hunt where you can not only explore the campus but also learn interesting trivia along the way. Founded in 1636 it is America’s oldest learning institution. Harvard has been around for so long that when the school first opened they didn’t offer Calculus…because it hadn’t yet been invented!! Before you leave campus be sure to visit Harvard Bookstore to pick up some Crimson gear.

After you complete the scavenger hunt stop for lunch at the Border Cafe where you can get absolutely delicious food such as Gulf Coast Seafood Enchiladas!! When the restaurant first opened they offered Tex-Mex favorites but then taking inspiration from chef Jose Creole they began to incorporate Cajun food into their menu and the results are absolutely delicious! 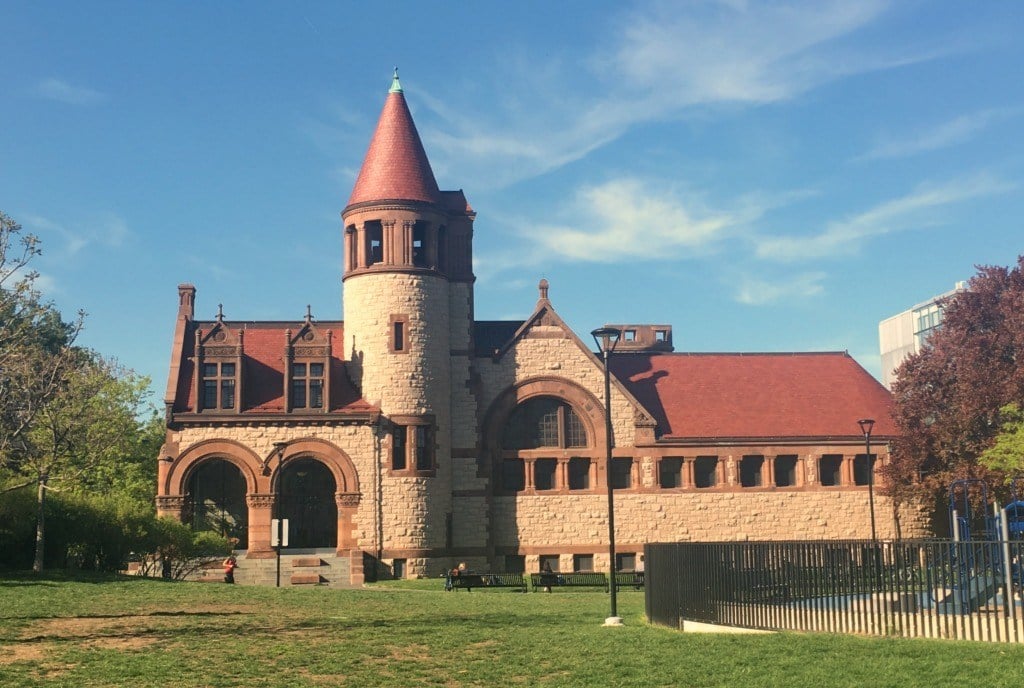 Since no trip to Cambridge would be complete without a stop at The Curious George Store make a stop there after lunch before setting off to explore the MIT campus and the Cambridge Public Library. The architecture of the original library is absolutely gorgeous and it will bring you back in time several hundred years. If you’re visiting during the spring, summer or fall bring a book and enjoy a snack out on the lawn! 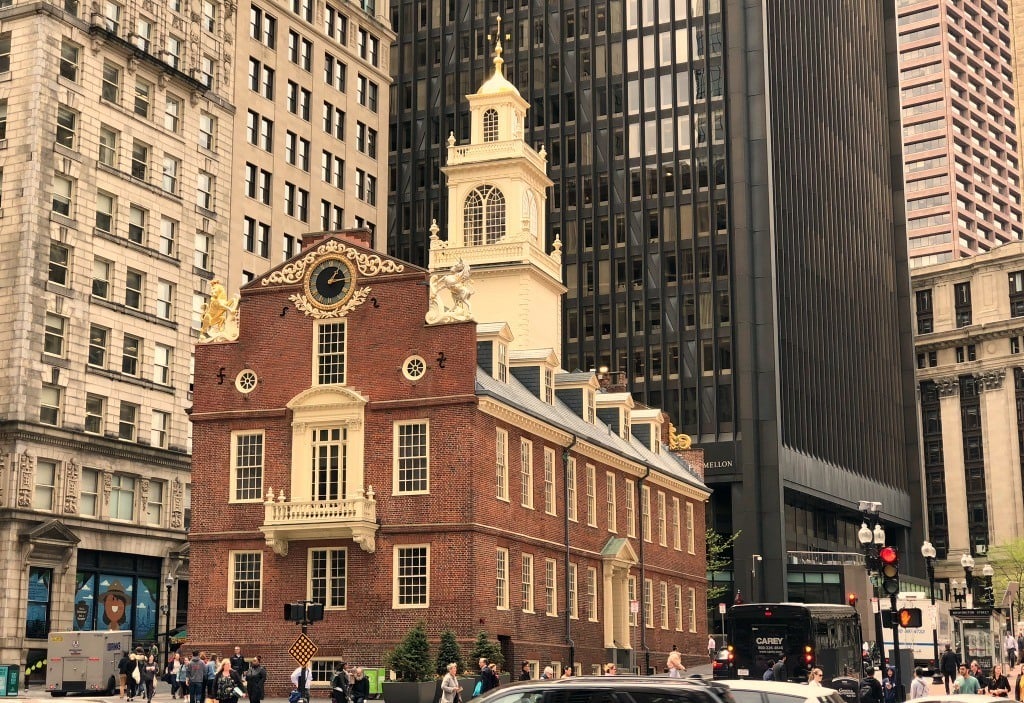 On day two in Boston, it’s time to head to one of those firsts in America! Boston Common (not CommonS!) dates all the way back to 1634 and is the oldest public park in the United States! Before you head into the park make your way across the street and spend some time exploring the Boston Public Garden where you can take a ride on the iconic Swan Boats and visit the Make Way for Ducklings statues. Installed in the late 1980’s the statues of Mrs. Mallard and Jack, Kack, Lack, Mack, Nack, Ouack, Pack, and Quack are one of the most popular Boston attractions for kids. 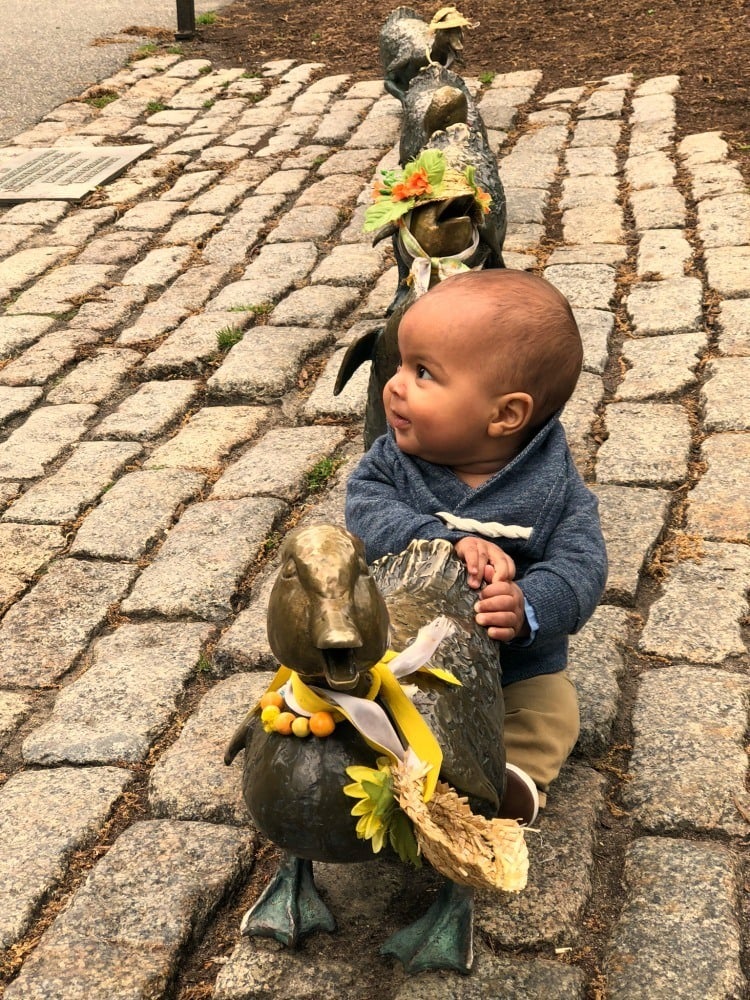 Then it’s time to hit the Freedom Trail! You’ll follow the red-bricked red that leads you to 16 historically significant sites including Paul Revere House, Old North Church, King’s Chapel, Old State House and more! This trail is only 2.5 miles but you’ll want to dedicate a good portion of your day (or at least your afternoon) to the trail because there is so much to see along the way! And when you pass by former meeting house Faneuil Hall, a popular marketplace, be sure to grab a clam chowder bowl from Boston Chowda.

In a day filled with iconic Boston sites, you’ll want to wrap up the day with a ballgame at Fenway Park (be sure to travel between April and September!) home to the Boston Red Sox. This stadium was built in 1912 and is home to the well known Green Monster! Not only can you watch a Major League Baseball game but you can enjoy tater tots from the concession stands and a stroll down Yawkey Way to soak up Sox history. 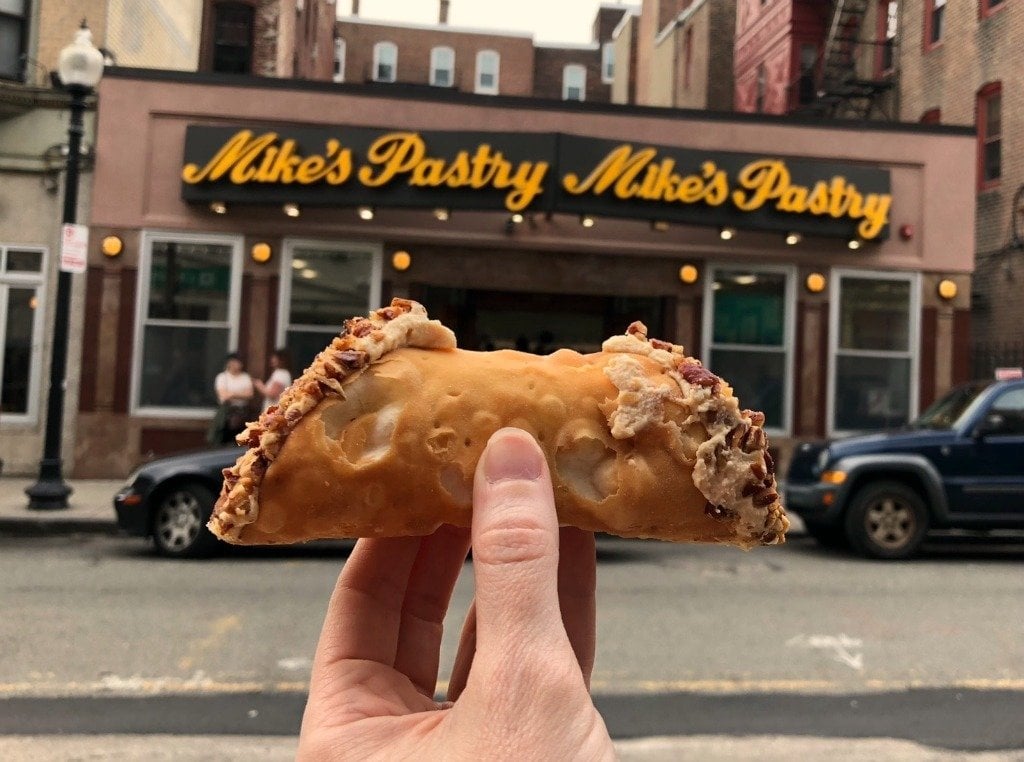 For our third and final day in Boston, we’re heading to the North End for some delicious Italian food and exploring sea life! Interesting fact about the North End, back in 1919 a storage tank holding more than 2 million gallons of molasses burst and spread through the North End of Boston making it the worst molasses-related accident in history! A trip to the North End would not be complete without a visit to the New England Aquarium. I would suggest going first thing in the morning when the aquarium opens so you can do some exploring before taking a mid-day whale watching tour. After the tour head back inside at the aquarium to finish exploring and make sure you spend time visiting the penguins and the Giant Ocean Tank…where you can see three sea turtles!!

Wrap up your day with a stroll down Hanover Street. Pop into Mike’s Pastry, home to scrumptious cannolis, and pick up one, or more, different cannolis to sample. Then stop by any one of the Italian eateries lining Hanover Street. There is absolutely no way to recommend just one because there are so many delicious options you can’t go wrong.

There are so many things to do in Boston! The city is filled with iconic sights, delicious food, and hidden treasures worth exploring. You could easily turn three days exploring Boston into a full-week exploring this city, but for now, enjoy your three days!

Have you been to Boston? What did you enjoy most about the city?

Did you enjoy this post? Check out these popular posts too:

Learning from the Architecture of Historic Downtown Chicago

Tips for a Smoother Traveling with Kids Experience

A Scratch off Travel Tracker Map for Travel Lovers

Pin it for later: 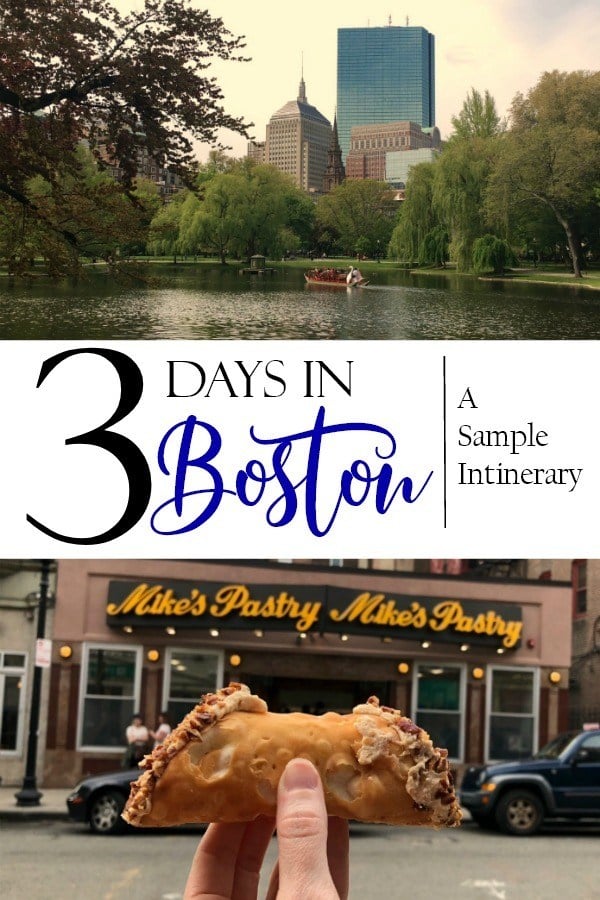 Seriously !!! If your time is limited and you want too see the most fascinating historical things in 90 minutes try the amazing Boston Duck Boat tour. The Duck Boats tour (with a narrator )the city of Boston, Cambridge, past MIT , Bunker Hill and much, Much more . Great Time !!!!!!

I've done Duck Boat tours in the past and really enjoyed them. I agree that they are a great way to see a new city. Thanks for sharing!

I was in Boston a couple years ago but only got to play tourist for one day before a week of meetings. I walked the Freedom Trail - I'm like you in that I really love history! Great guide to the city and excellent photos. Who knows, maybe I'll get back there someday! :-)

I"ve loved Boston since I first visited as a teen and have been back many times. The city has so much history, character, culture and a vibrant waterfront. I loved the aquarium too but the last few years have been there in the deep of winter. Too cold to do much exploring, Hope to remedy that this fall.