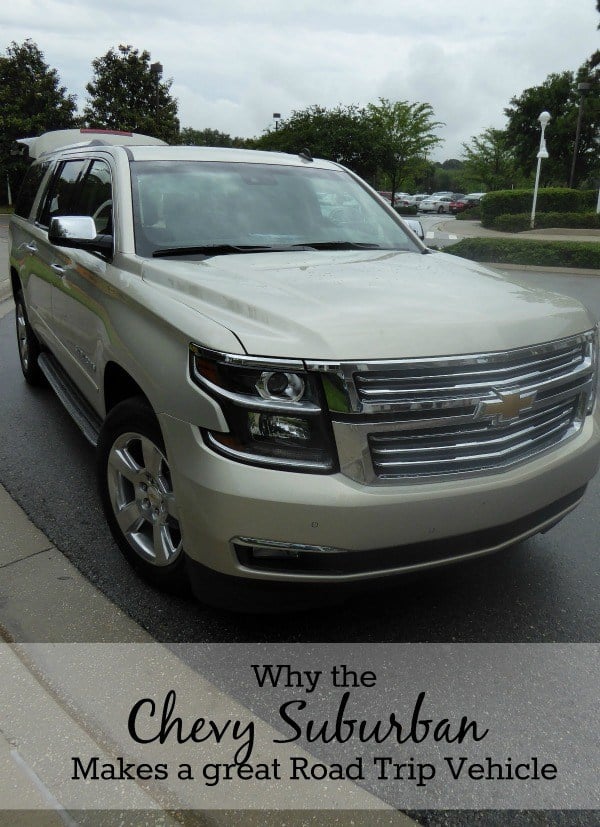 When it comes to dream cars, my views have evolved with each new phase of life.

As a new driver, I could think of nothing I wanted more than a Ford Mustang.

As a new mother, a mini-van topped my list.

When my kids were school-age, I had my eye on the mid-size SUV, the sporty Chevy Trailblazer.

From there, my family’s nomadic lifestyle led to driving a full-size Chevy Conversion Van, which my middle child actually learned to drive with. I loved that conversion van, but I’ll spare you the name my teens dubbed it.

These vehicles were followed by my all-time favorite, a Chevy Tahoe. But as much as I loved my Tahoe, my teenagers did not (unless they were in the driver’s seat). Every time one of them needed to pile in the third row seat, World War III would erupt, ruining many family outings.

It became such a hassle that when my husband needed a new truck for work, I voluntarily gave up my Tahoe, knowing he’d get a great trade-in.

I was convinced there wasn’t really a vehicle on the market that would work well for my picky family. And then we rented a 2014 Chevy Suburban and drove from our home in Ohio to California and back.

I’ll be honest with you, after our 5,000 mile road trip, I’d bonded with that full-size SUV and I may have teared up just a bit as my husband drove it off into the sunset to be returned to the rental car agency.

What Makes the 2014 Chevy Suburban so Special? 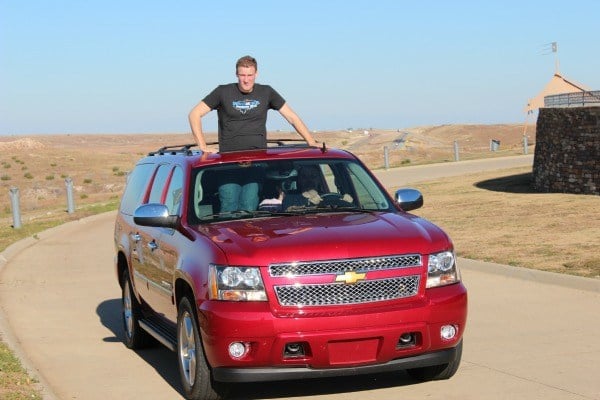 1. Plenty of space for all my family’s luggage.

One of the reasons we prefer to road trip vs. air travel is that we’re not limited to what we can pack. Providing our gear fits in the vehicle, of course. The Chevy Suburban offers a ton of cargo room, which means plenty of space for clothes and gear for my family of five.

2. Lots of space to spread out and legroom for the tall guys in my family. 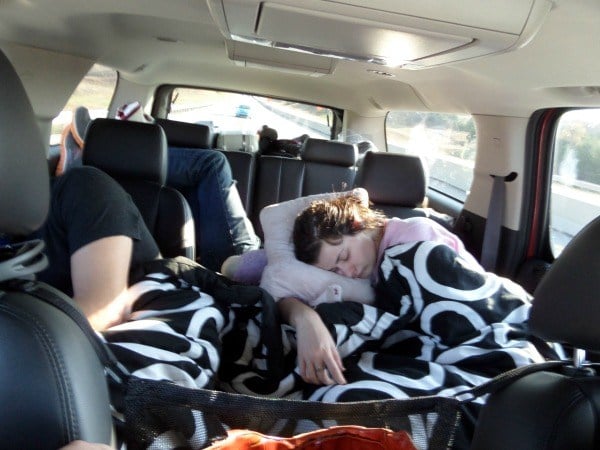 If you ask my teens why they loved the Chevy Suburban, they would give an unanimous answer of  “the space”.  At 5’7”, I’m the shortest person in my family. My boys are both around 6’3” the Suburban offers more inches of legroom for passengers in the third row seat than the similar Tahoe- the difference between a comfortable ride and one that none of us wish to relive. But beyond legroom, there is just more space in general. Plenty of room for my brood to spread out and get comfortable with their blankets and pillow pets.

For a full-size, heavy SUV, the new Chevy Suburban gets 15 mpg in the city and 22 mpg on the highway.

When my family sets out on a road trip, we pack our smartphones, tablets, iPods and cameras- all of which need to be charged. Repeatedly. The Suburban offered plenty of ports to charge our devices- ensuring peace (or as much as can be expected) throughout the trip.

5. The entertainment system is awesome.

The 2014 Chevy Suburban has two TV Monitors (plus the My Link monitor in front- but that doesn’t count when you’re driving), a DVD player and wireless headphones. The radio also plays multiple CD’s and if my husband and I weren’t listening to the radio in front, our teens could man the controls from the back seats.

Let’s face it, we all like to drive a nice looking vehicle and the Suburban certainly turns a few heads.

When we faced an unexpected snow storm in the mountains of Colorado– I was comforted knowing that the vehicle offered 4-wheel drive that could engage with the touch of a button. How cool is that?

I really loved the 2014 Chevy Suburban that my family drove across country last fall and I couldn’t imagine a better road trip vehicle until… I saw the new 2015 Chevy Suburbans this past week at the Traveling Mom Retreat at Walt Disney World.

Why the New 2015 Chevy Suburban is even better than last year’s model. 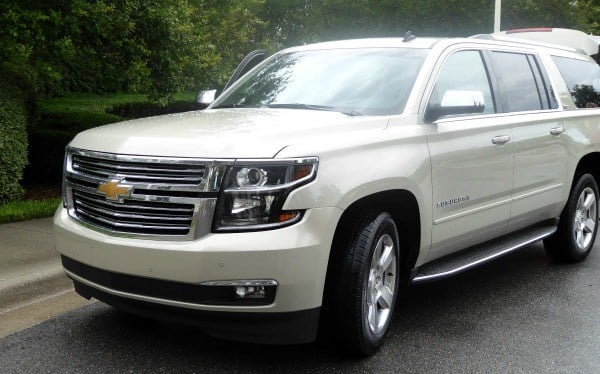 The new 2015 Chevy Suburban has undergone a major redesign just in time for it’s 80th birthday! Can you believe the Suburban holds the title for the longest running automobile nameplate in the nation? That’s pretty remarkable. The Suburban has long been known as a reliable vehicle that is perfect for hauling- whether that would be your large family or your family’s recreational vehicles.

This year, the Suburban debuts with a new look beginning with the headlights and inlaid doors that are triple sealed, making the Suburban the quietest full-size SUV on the market. 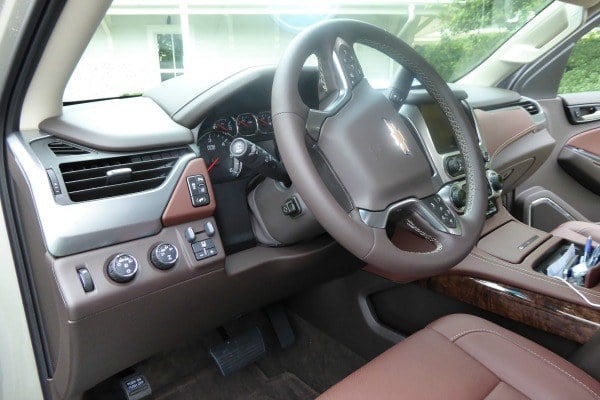 The 5.3 liter Ecotech engine also allows cylinder deactivation when cruising down the highway and not hauling anything. That means that this 8-cylinder vehicle actually drives on four cylinders, improving gas mileage by up to 10%, just adding to the reasons why I think the Chevy Suburban is a great road trip vehicle. 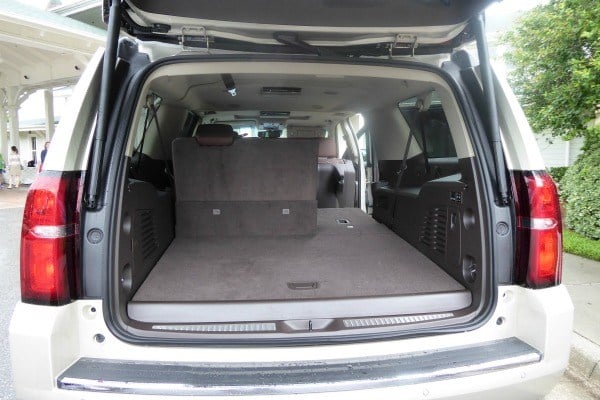 Remember all that cargo space I mentioned? The Suburban now allows you to lower the second and third row seats at the push of a button.

And because we all know how important it is to stay alert when you’re traveling, Chevy added new driver alerts and driver assistance technology like front park assist and forward lane departure warnings. And I didn’t even mention OnStar and the 4G LTE Wi-Fi connection that is an available option. Just think of how that would revolutionize your next road trip!

I love all the new features, but honestly, what matters most to me when I’m traveling is the comfort of my family and as I’ve mentioned, the Suburban allows plenty of space for my family to spread out and get comfortable and stay comfortable- if that means a drive across town, or a trip across the country.

What is your dream road trip vehicle?

Disclosure: My family paid to rent the Chevy Suburban for our road trip in 2014. While at the recent retreat in Walt Disney World, Chevy provided vehicles for the Traveling Mom and She Buys Cars writer’s to preview and test drive.

Hi Tonya thanks for sharing this. We are bringing my elderly parents both 85 over from new Zealand for a 3 week trip around mostly yosemite park. We have booked a suburban el or similar. I was concerned it may be a bit big but the comfort sounds awesome and I wanted to make this trip as easy on mum and dad as possible. Do the Tahoe give as good a ride and as quiet? Thanks Nathan

The Tahoe is equally comfortable and quiet. The only hesitation I would have with elderly parents is that the step up in and out of the SUV may not be comfortable. I recently traveled with my mom and dad and much preferred a minivan for that reason.

We almost always find the best deals and rent through Budget Rental Cars. I get the best deal checking prices as far out as possible and paying in advance. The closer it gets to the rental date, the higher the prices go. I also bid on Priceline for the best deals. You'll need to keep in mind, you can only bid at airport locations and if your bid is accepted, the car is yours. You won't be able to cancel without a hefty fee, if at all. Airport locations always charge a hefty fee for taxes so I factor that in on my bid. I typically rent a minivan and in our case, we've always been offered an upgrade for very little more. A minivan is enough room for my family, but if I NEEDED an SUV, I'm not sure I'd count on getting it as a sure thing.

Nice ride, I'm going to be in a used budget though... buying again soon.

Gas mileage and room are the selling points for me. I hate to say that comfort comes in after those! We have a growing family of 5 so space is a must!

My dream trip vehicle would be one with awesome mileage and space for the passengers and luggage.