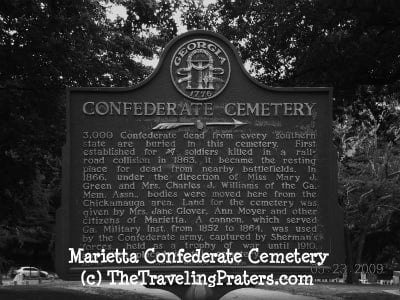 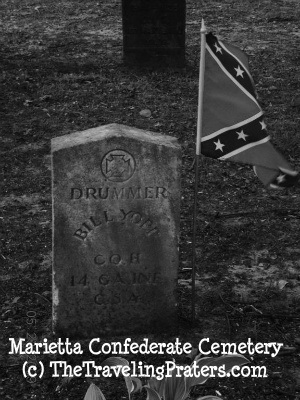 The graveyard was originally established on donated land after a nearby train collision killed 20 soldiers. Shortly after, soldiers killed in the nearby Kennesaw Campaign were also buried on the grounds. After the battle at Kennesaw, a project began to remove the Confederate killed from the Chickamauga battlefields as well as the Atlanta campaign. Today, the cemetery is the final earthly resting place for 3,000 soldiers, 1,000 of whom are unknown. 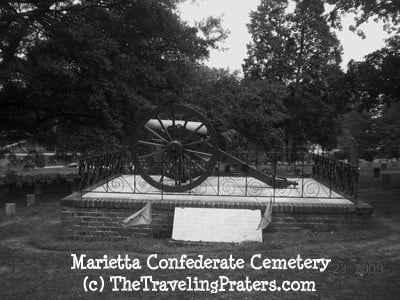 The lone cannon on display, known as “Little Cannon”, was used by the South in training operations at the Georgia Military Institute prior to its use in combat. It was abandoned in Savannah and claimed by Sherman as a war trophy, returning North with the Union soldiers at the end of the Civil War before its return to the South through an Act of Congress in 1910.

The Marietta Confederate Cemetery is thought to be the oldest confederate cemetery and the largest one South of Richmond. It is also the first place in the South allowed to fly the Confederate flag after the Spanish-American War. 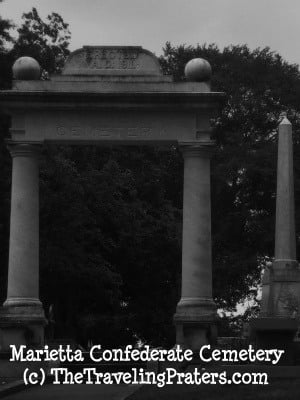 Born and raised in the North, I had no idea that the South celebrates a Confederate Memorial Day on April 26th– the day of the surrender of Confederate General Joseph E. Johnston to Union General William Sherman on April 26, 1865; we just happened to visit the cemetery at that time. Though Alabama, Texas, Florida, Georgia, Louisiana, Mississippi, North Carolina, South Carolina, Tennessee officially celebrate a Confederate Memorial Day, the dates vary with each state from January to June.

If you plan to visit the Marietta Confederate Cemetery, you can download a brochure that includes interesting legends, history and information about the memorials and grounds.  I also shared some suggestions on how to turn a trip to a cemetery into a full-blown field trip at the Homeschool Village; Frugal Field Trips: Cemetery.

Finally, if you happen to find yourself in Marietta, don’t forget to drive past The Big Chicken–    it’s a roadside attraction you aren’t likely to forget.

Hey I am a traveling teen in an RV with my family this is such a cool blog! I am keeping a blog about my travels also.