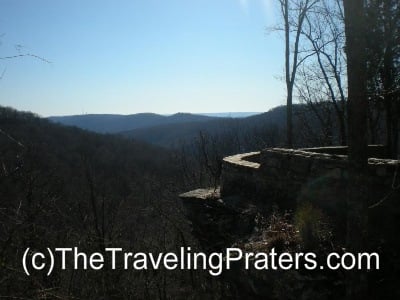 One of the overlooks at Monte Sano State Park

Monte Sano State Park in Huntsville, Alabama was the first place we ever called home when we embarked on life as a full-time RV family and a place that we all think of with special fondness.

Living in a mountaintop campground with over 2000 acres of land to explore, with bike trails, hiking trails and a disc golf course, there’s something sure to please everyone at Monte Sano State Park.  There was only a few things missing,  we didn’t pack bikes,  didn’t know how to play disc golf, and actually arrived in Huntsville just in time for the rainy season. We learned quickly that we needed to take advantage of the breaks between rain showers, and enjoy the scenic views from the trails.  We found several surprises tucked away in the woods of Monte Sano.

Located amid the Bamboo and Weeping Cherry trees, we  found a neglected, but enchanting Japanese Tea House in the midst of a Japanese Garden, minutes from our campsite. If you stop in the camp store, they have a brochure that will tell you about each of the plants and trees that are found in the garden.  The brochure also translates the Japanese characters into English, but the signs have been well weathered and we didn’t see anything in need of translating. While we were exploring the area, the kids excitedly found a turtle that they wanted to keep, but reluctantly agreed to return it to the wild, where they found it. 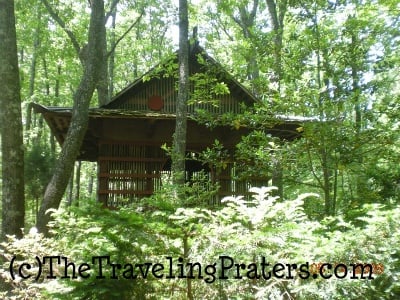 Though Monte Sano doesn’t offer educational Ranger programs, they do sell a guidebook for teachers in the Campground Office that will lead you on a self guided tour of the outdoor classroom.  This was certainly a surprise.  Having visited Monte Sano many times, we’d never noticed the outdoor classroom.  The classroom is found easily off the Fire Tower Trail near O-Shaugnessy’s Lily Lake.  There are 18 stops on the tour and along the way, you’ll learn about canopy trees, shrubs & brush and see a butterfly garden.  You’ll also see Flirtation Path and a tree that was struck by lightening. 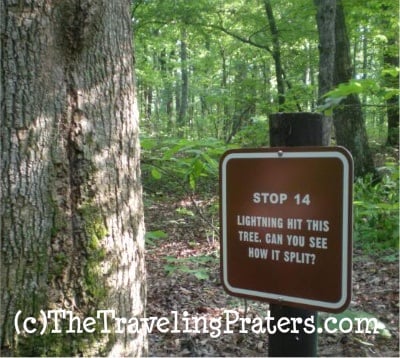 One of the stops in the Outdoor Classroom

According to records we found at the library, Monte Sano has an intriguing history.  One romantic legend tells how Monte Sano got it’s name.  A young man, Monte, the son of a pioneer settler fell in love with a beautiful, young Indian maiden, the daughter of the Chief.  The couple would  meet often and secretly and make plans to marry at Inspiration Point.  One night, Monte told his lover that the marriage they had been planning could never be. Not only did his father object to the union, but so did the chief.  Sadly, the maiden cried “Oh, Monte, say ‘No’, and not able to bear the thought of living apart, they both jumped to their deaths from Inspiration Point so they could be reunited in the ‘happy hunting grounds’.   I’ll never mispronounce Monte SAY-no again.

Monte Sano truly was one of our favorite parks to explore in Northern Alabama. You may enjoy these other posts about this beautiful state park:

Hiking with a Naturalist at Monte Sano State Park

So glad you posted this one. I could never pronounce it right. Do you think they made up the story just to help us pronounce it?

lol! Too funny- I guess too many people were trying to figure out the correct pronunciation. What better way to remember than by making up a horribly sad legend, huh?

such a great place to go! you really have been everywhere! lol

We LOVED Monte Sano. We'll be making a quick trip to Alabama the end of the month and if we don't manage to fit in even a quick hike here, I'll be so disappointed!