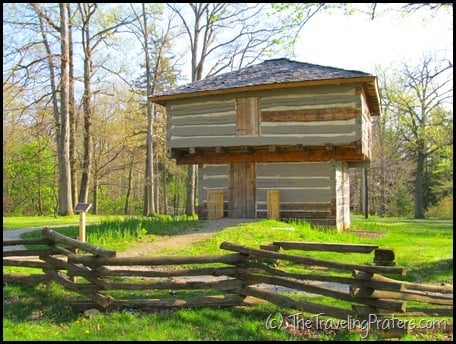 The Blockhouse in South Park has been a prominent feature of Mansfield for over 200 years. Built on the square of Central Park during the War of 1812 by soldiers from Coshocton, the Blockhouse was originally constructed to protect the early settlers from possible Indian attacks.

Though the Blockhouse was used briefly in the capacity with which it was built, it did serve the newly formed Richland County as the first courthouse, jail, school and hosted the first religious service.

The structure served as courthouse for three years until a suitable replacement was built. The blockhouse was sold for $56.40 and moved from the square to a new location on East 2nd St. Though nearly a dozen blockhouses were built, by the end of the 19th century, only one survived.

In the early 1900’s, Mansfield required the blockhouse just in time for the Centennial Celebration. It was restored and briefly moved near it’s original location in Central Park before being dismantled and reassembled in South Park where it sat for nearly a century.

In the 1920’s the Blockhouse once again served the community.This time to be used as a meeting place for the Boy Scouts who equipped the structure with electric lights and gas heat. It was used in this capacity until the early 1980’s.

In celebration of Mansfield’s Bicentennial, the Blockhouse was once again dismantled, restored, moved to a more prominent location in South Park and reassembled where it stands today.

It is possible that the Blockhouse is the oldest remaining courthouse and jail in the entire state of Ohio. Pretty cool, huh?

The Blockhouse now stands as an iconic image in South Park on the edge of the Historic Boulevard District of Mansfield.

In addition to the Blockhouse, you’ll also find a marker memorializing the tragic Sultana disaster, Civil War cannons, a tribute to Johnny Appleseed, a memorial to those who served in the Ohio Volunteer Infantry during the Civil War, a pavilion, playground, corn hole games, short hiking trail and outdoor bathrooms.

You can plan to allow as little as 15- 30 minutes to view the Blockhouse and memorials found in South Park or spend the afternoon allowing the kids to play on the playground equipment and having lunch in the pavilion or outside picnic tables. 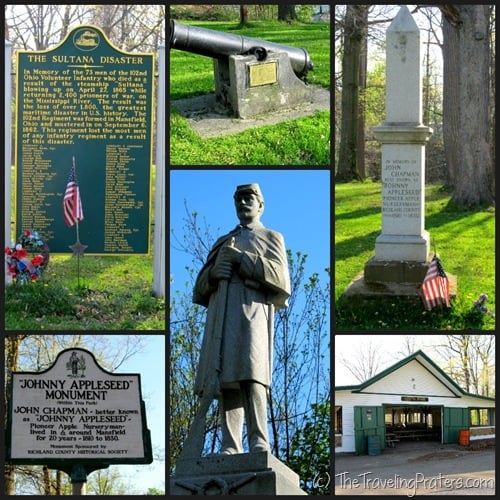 You may enjoy these other Mansfield area attractions:

The park has local historical value with 1812 Blockhouse, 1808 Log Cabin, and currently building a working Blacksmith/Cooper shop. A place for kids to play and picnic tables for a picnic lunch. In the summer there is a program for children called Fun in the Park and in October an historical reenactment event. More information about the buildings can be found on Facebook at Richland Early American Center for History.

Grew up in Mansfield in the 1950's in South Park (we lived on Pinecrest). Attended Grammer school grades 1-4 at Brinkerhoff, I walked to school each day passing by the Blockhouse. Fond memories!

Thanks for sharing those memories with me, Susan! The Blockhouse is now open select days of the year so we can take a peek inside.