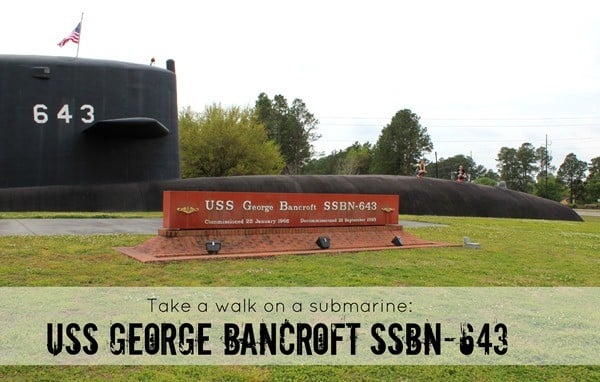 Roadside attractions have a special place in my heart. Maybe it’s because I love things that are quirky and unusual; the things that you don’t see everyday. Or maybe it’s due to the budget conscious side of me that tries to stretch our travel budget just a little bit further, so we can see more, and do more without sacrificing the quality of our trip. Since many roadside attractions are free, I’ve found that adding one or two on each trip tends to ramp up the fun factor while giving my family an excuse to get out of the vehicle to stretch our legs. 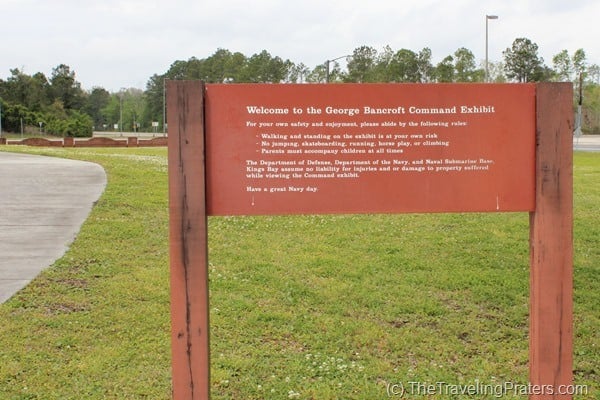 You may have noticed that my recent trip to Florida was full of roadside attractions. I’ve shown you several, and believe me, there are more to come. 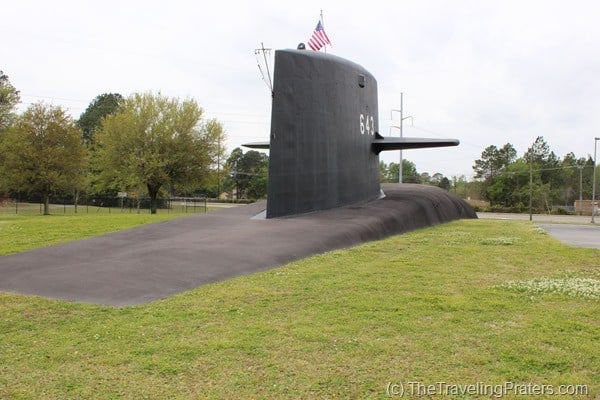 One of my personal favorites was the USS George Bancroft roadside attraction located just outside the gates of the Kings Bay Naval Submarine Base in Georgia. Located minutes off I-95, this stop was well worth the detour. 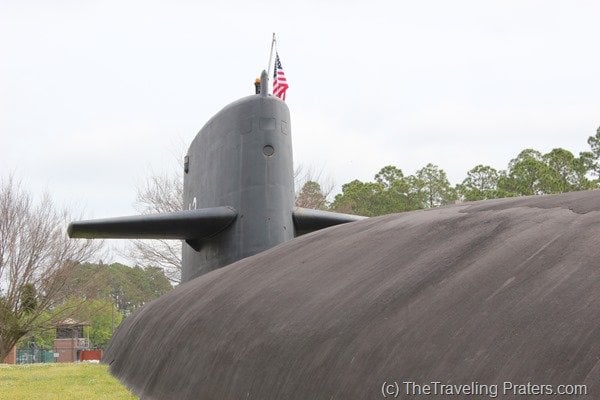 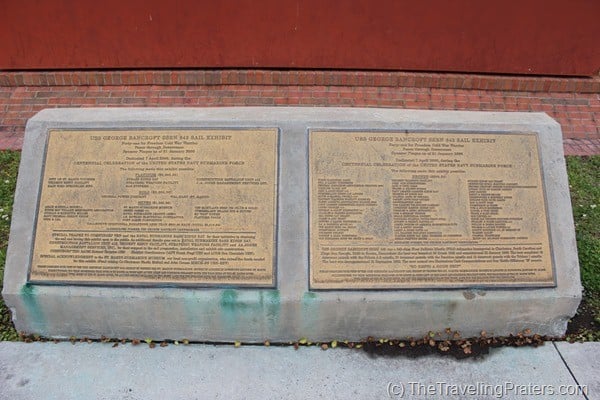 That would have been the end of the USS George Bancroft, but members of a local submarine veteran’s group began a grassroots effort to save the Bancroft. Their efforts succeeded in securing the sail of the submarine, which was used to create the exhibit. Members of the community pitched in to construct an earthen hull which was covered with black gunite, a mixture of cement, sand and water.

The resulting “submarine in a sea of grass” that makes for an incredible photo op. 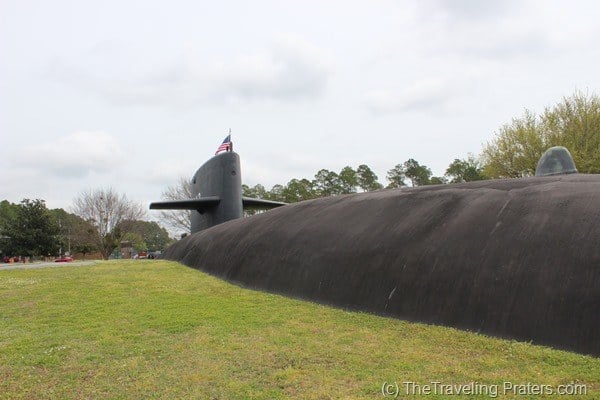 The exhibit was dedicated on April 7, 2000 while celebrating he 100th anniversary of the submarine forces.

While you’re welcome to walk along the cement hull, climbing on the sail, or command center, is strictly prohibited.

You’ll find plenty of parking in the Pass & ID parking lot- even plenty of room for RV’s.

This site gets a thumbs up from both of the teens.

The Big Muskie in Miners’ Memorial Park
Visiting the Harland Sanders Cafe and Museum in Corbin, Kentucky- the First KFC
A Stop at the Giant Cross in Orlando

I served on the Bancroft Gold Crew from Sept 1981 in the yards at Portsmouth, through until June 1984, when I left to be an instructor at Nuclear Prototype in Ballston Spa, NY.

Thanks for sharing and for your service. I just stopped at the USS George Bancroft a couple weeks ago for some updated photos.

Its an honor to SERVED FROM 81 TO 86 on the USS GEORGE BANCROFT BLUE CREW. 6 patrols. RADIOMAN

Thank you for your service!

I served on the Bancroft from 1979-1982. I was there at the sail dedication and it was awesome. Note: the Naval Academy (where I graduated in 1977) has one dormitory (the largest in the world) and it is named Bancroft Hall. When I got my orders to the Bancroft I thought well here I am back in Bancroft!

Oh my goodness, James! I had no idea. I can imagine your disappointment in thinking that you'd be back at the dormitory but how fascinating that it is the largest in the world. Thank you for your service and for providing interesting insight to the USS George Bancroft.

I made my fourth patrol on the USS George Bancroft SSBN 643 (blue crew) as AN(SS) Kenneth E Catlett thanks to my Skipper , Capt Robert OMalia.. seeing our boat honored in this way makes me very proud. Thanks to all that worked so hard to get this done. Respectfully ,QM 1(SS)ret Kenneth E Catlett

THank you for your service!

Tonya, I visited this "roadside attraction" because I'm a former crew member and we recently (2015) held a reunion there. Thanks for writing about my former home. P.S. Small typo to correct, should be walkin on the hull not haul.

Thanks for the correction, Tom. I knew that, just overlooked the spelling and of course spell check doesn't catch everything. I made the correction in the post. Thank you so much for your service.