You may be familiar with the World’s Largest Bat -baseball bat that is- in Louisville KY but did you know there is another object that vies for the title?

Roadside attractions remind me of my childhood days when I’d travel with my mom and dad or grandparents to Port Clinton, Ohio to see the now-closed Prehistoric Forest and Mystery Hill or the Blue Hole in Castalia, also now closed.

I don’t know what thrilled me about these attractions, but the fascination has continued into my adulthood. Now with children of my own, I still find myself like a giddy little girl when we travel and pass by the unusual. And the excitement is contagious as my own children now point out the extraordinary sites that we encounter.

Well, that’s a lie. One of my children will point out those sites. The other two are starting to come around.

Whether it is the Big Chicken in Marietta, Georgia, the Field of Corn in Dublin, Ohio or the Dolly Parton statue in Sevierville, Tennessee, Roadside Attractions never fail to catch my eye.

But the fun doesn’t stop there.

I don’t simply seek out roadside attractions to visit, if I can get a chance to sleep in one, I’ll do that too. The Wigwam Motel is only a couple hours from Louisville and is one of the places that fit the description of unique places to sleep.

It is well worth the stop and can you believe it is where my husband and I chose to stay for our 25th wedding anniversary?

Can you believe my husband agreed to it?

That my friends is true love. 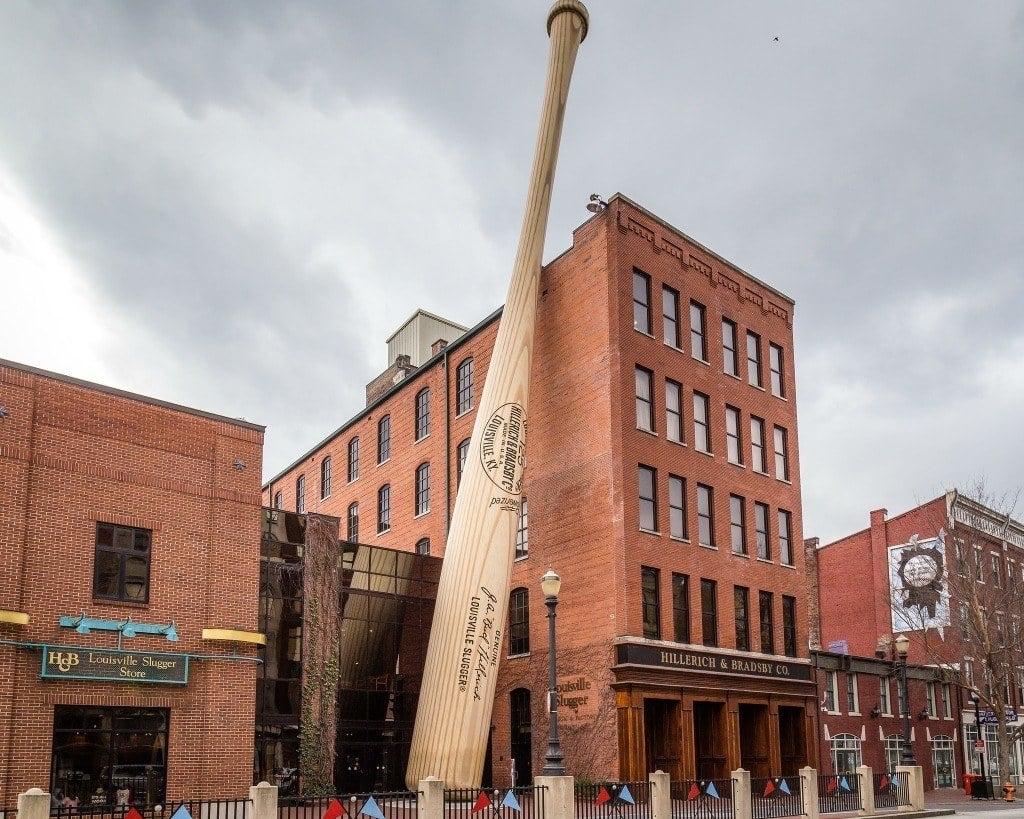 Anyway, back to what I was saying; in my quest to visit new-to-me roadside attractions, I opted to get off the highway on a trip from Alabama to Ohio and check out downtown Louisville with the intent of seeing the world’s largest bat. But I was surprised to find there isn’t only one bat in town making that claim- there are actually two, very different bats; an over-sized model of the Louisville Slugger which can be seen leaning against the Louisville Slugger Museum.

The 120-feet-tall, and weighing in at 34 tons, this steel baseball bat is an over-sized replica of the bat Babe Ruth used during his baseball career.

The world’s largest bat has been proudly displayed since 1995 an advertisement for the Louisville Slugger Museum and factory.

The bat is easily spotted as you drive down Main Street but believe me when I say you’ll want to take a closer look. 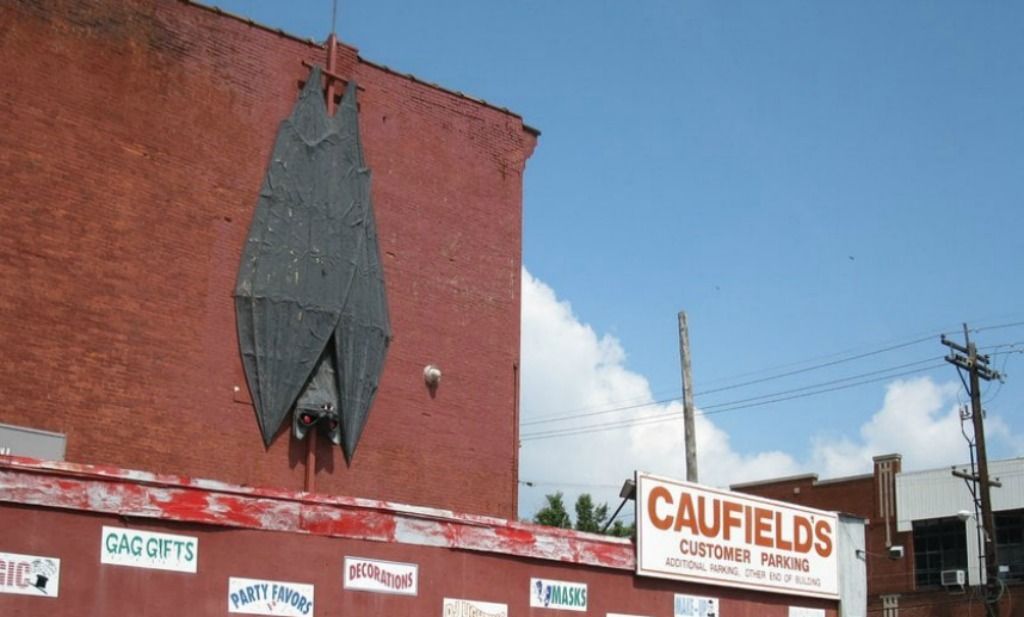 While you’re in the area, drive, or walk, three blocks down the road to catch a glimpse of another roadside attraction.

This too claims to be the World’s Largest Bat and as you can see, this isn’t the replica of the baseball bat I showed you first. This nocturnal, blood-sucking vampire bat hangs from Caufield’s Novelty, a popular costume and novelties store.

Caufield’s is a landmark in itself and has operated out of its present location since the late 1980s but those days are drawing to a close as more and more consumers make online purchases resulting in the closing of the small businesses that Caufield’s supplies product to. In an attempt to change with demand, the historic brick building that currently houses Caufield’s is for sale.

It’s uncertain whether the bat will be sold with the property so if you’re dying to see this red-eyed creature that graces the side of the building, you may want to plan a trip now rather than later.

Plan your trip to Louisville with an overnight stay with our handy map. Find cheap hotels & Airbnb’s in Louisville and book your stay now!

Have you seen either of the world’s largest bats or have another favorite Roadside Attraction? Leave a comment below and tell us about it! 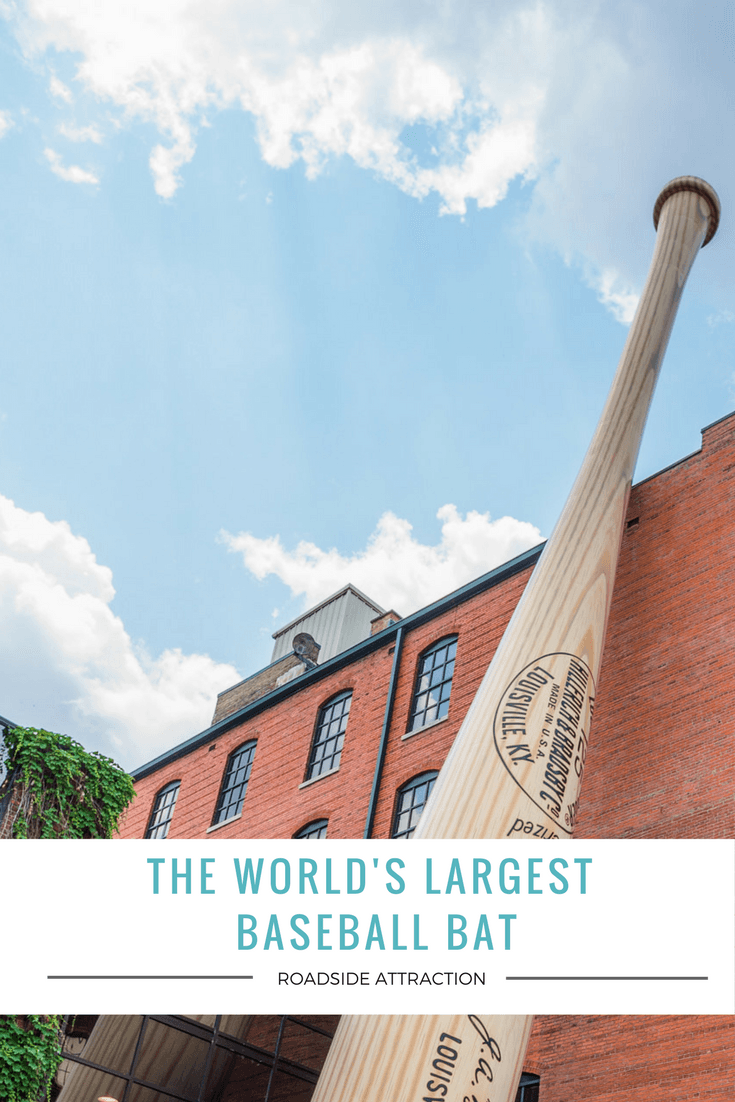 10 Roadside Attractions you don’t want to Miss
Gumby & Pokey
The Cross at the Crossroads of Effingham, Illinois
The World’s Largest Cuckoo Clock

This post was originally published on April 25th, 2011 and was updated and republished on November 5, 2019.

Don't worry, I saw one of those too! More on that bat in another post. :)

LOL - I follow your blog and it shows that on my blog - and so when I read your title of todays blog I thought a big mouse with wings... Duah Baseball - lol cool...