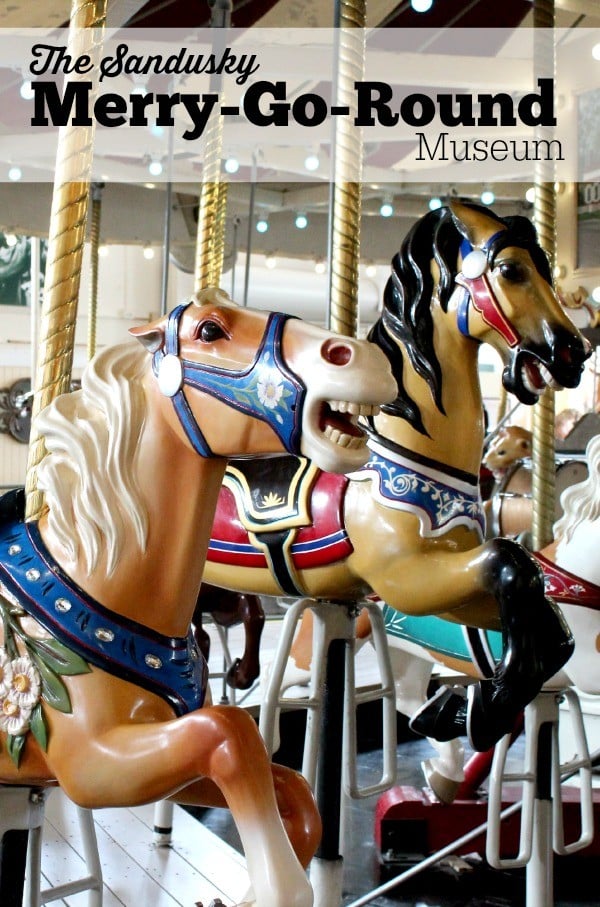 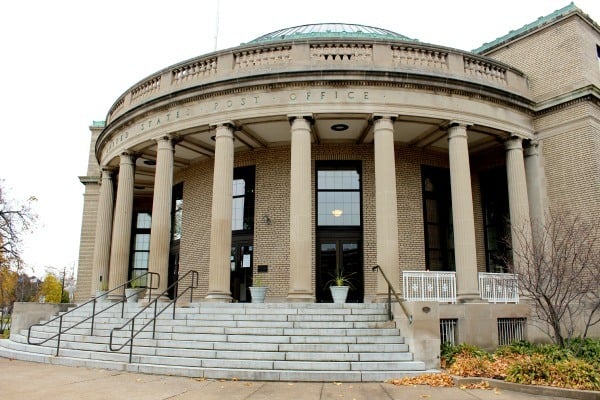 The idea for the museum began in 1988 when a series of four carousel stamps were produced by the U.S. Post Office. One of the horses depicted was from the Kiddieland carousel in nearby Cedar Point. Not wanting Cedar Point to get all of the attention, a group of residents prepared for a small gathering of guests and displayed the armored horse carousel piece shown on the stamp with other borrowed pieces. 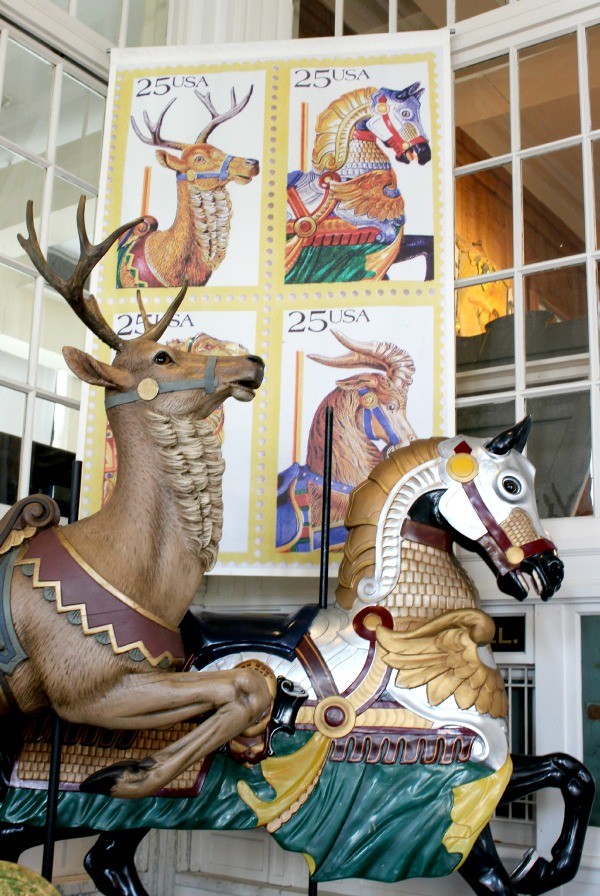 The former Sandusky Post Office was chosen for the event location. The building is unique, as it’s one of only two known round-front post offices in the United States. The event exceeded the couple hundred visitors that the organizers had planned for. Over 2,000 visitors attended the gathering.

The idea of a permanent museum was born, and the Merry-Go-Round Museum officially opened in 1990, with a collection of pieces on loan from private collectors. In 2020, the museum will celebrate its 30th anniversary!

There are three styles of carousel horses and the Merry-Go-Round Museum has all three examples on display. The Philadelphia style horses were more realistic and larger than the other two styles, Country Fair and Coney Island. 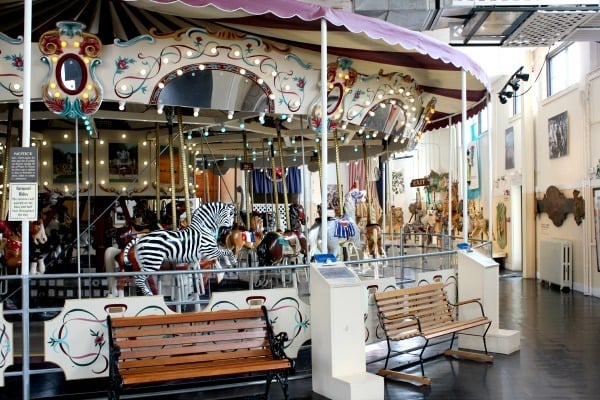 Country Fair style horses were often smaller, as they were intended to be moved from country fair to country fair. They needed to be easy to transport, handle, and store. They were also plain, unlike the Coney Island style.

Coney Island style animals were all about the bling. Intended to be eye-catching, these horses and animals were the most heavily jeweled and gilded.

Today, you’ll see examples of all three carving styles of carousel animals, view other carousel memorabilia, and ride a vintage 1939 Allan Herschell carousel, housed in the heart of the building. I can’t think of a building and exhibit that complement one another more perfectly. 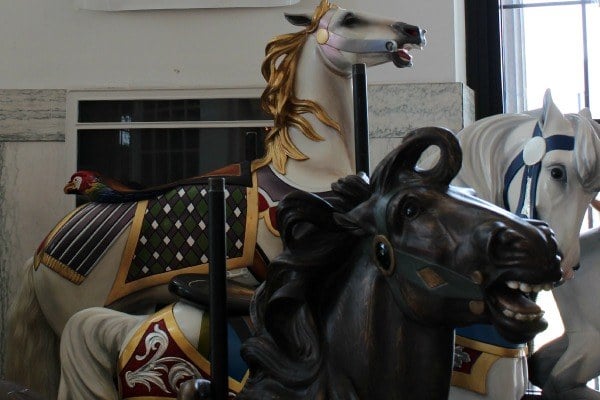 Fun fact: Next time you ride a carousel, compare both sides of the animal. Typically, only the side which faced the outside, what people see, was heavily decorated.  Leaving one side plain, or not as fancy, resulting in less time and cost in crafting the piece.

While I loved the carousel horses on display, it was the menagerie of animals that really caught my attention. A pair of lions, a rooster once used as a target for archery practice, giraffes and dogs. This museum is brimming with artistic pieces. 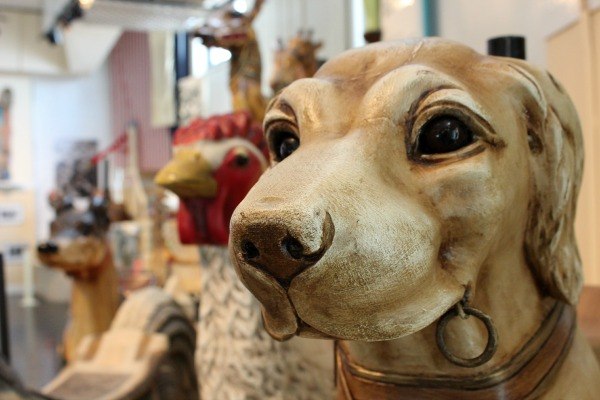 Speaking of artists, there is also a station in the museum where you can see volunteer woodcarvers at work. Each year they produce two new pieces under the direction of a master artist. One piece is to be added to the Herschell carousel on-site, and the other to be used as the prize for the museum’s annual raffle. 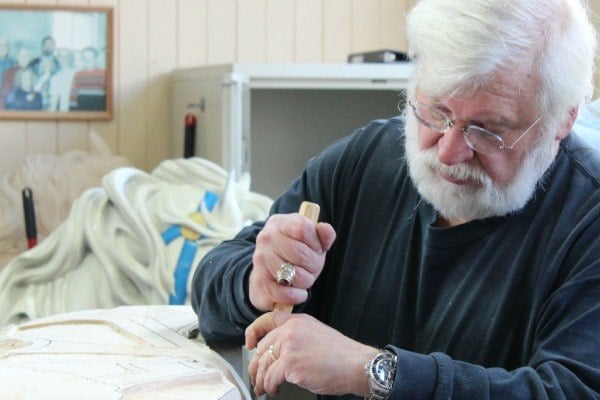 My family elected not to visit the Merry-Go-Round Museum with me but, honestly, I think they would have enjoyed it. I know I did. Once I stepped inside this museum, I felt as though I was transported to another time. I could almost pretend I was a young girl, riding a carousel for the first time at the county fair.

Or that I was a young mom, placing my child on their first carousel horse, firmly holding on to their tiny body, feeling my heart swell as their dimpled little face turned towards me and lit up, as the organ began to play and the ride began to move.

The Merry-Go-Round Museum is not huge, so you won’t need to spend more than 45 minutes to an hour viewing the exhibits. It is very well done and the workers and volunteers are passionate about preserving the history of the carousel with the beautiful exhibits. Really, what’s not to enjoy?

1. The museum offers plenty of free parking behind the building.
2. The woodworkers aren’t always there so call ahead to see if they will be when you plan to visit. You won’t want to miss them.
3. Plan to spend a minimum of 30 minutes to one hour visiting the museum.
4. Your admission includes one ride token for the carousel so don’t leave without your ride! Rides are offered every 30 minutes.
5. Admission is very affordable for families and children under the age of four are free.
6. Call or check the website for current pricing and hours. Note the museum is closed during the month of January.
7. I was told tours are sometimes available, depending on staff and volunteers. If you want a guided tour of the museum, call ahead to determine if your request can be accommodated. 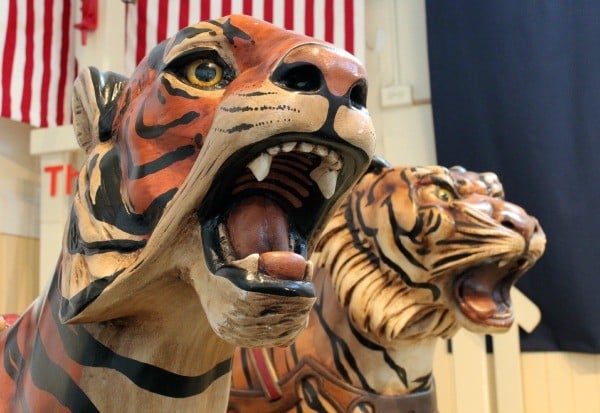 Other Attractions in and near Sandusky

If you enjoy visiting museums when you travel, you may be interested in the first KFC where you can grab a bite to eat and learn all about Colonel Sanders and his finger-lickin’ chicken.

Thanks to Lake Erie Islands & Shores for arranging my visit to the Merry-Go-Round Museum.

Would love to visit this museum some day! Love all the history centered around merry-go-rounds, and I'm definitely going to check on that fun fact regarding the plan/heavily decorated sides next time we find ourselves at a carousel--so interesting!

Oh Kate, your little one would love the museum! It's so bright and colorful, and you can't really go wrong with the full-size carousel! If you ever make it out this way, you'll find a number of carousels in the area (within an hour or so) that are worth stopping at. There's even one in my hometown of Mansfield.